Who Will Start at Right Guard for the Chiefs in 2021?

By Tucker D. Franklin
Posted by
ArrowheadReport
4 days ago 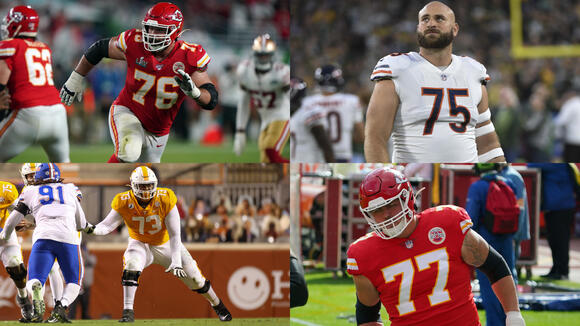 After a complete offensive line overhaul and a talent infusion for the group tasked with protecting star quarterback Patrick Mahomes, the Kansas City Chiefs have a good problem: they may have too many good players on the interior offensive line.

The Chiefs' right guard position is especially interesting, though it's also one player thinner after the injury to veteran guard Kyle Long, who is expected to miss training camp after suffering a knee injury this week.

Without Long as the presumed favorite, the right guard question is even more pressing: who's going to be the starting when Week 1 arrives?

Arrowhead Report's Jordan Foote and Conner Christopherson joined me on Friday's Roughing the Kicker Chiefs Podcast to talk about just that.

It's no secret that Kansas City made some moves this offseason to solidify the interior of their offensive line. The Chiefs signed Joe Thuney to a long-term deal in free agency, cementing him at left guard for the present and beyond. But when it comes to the right side, there isn't a clear-cut answer.

The Chiefs come into camp with a slew of guards on in the running for the starting position. Last year's starter, Andrew Wylie, was tendered in the offseason and will likely be on the outside looking in. The same goes for 2019 seventh-round pick Nick Allegretti, who started in nine regular-season games and all three postseason games at left guard last season.

COVID-19 opt-out Laurent Duvernay-Tardif is slated to be back with the team, increasing the competition level for the position. Before his opt-out, Duvernay-Tardif started in 57 games at right guard for the Chiefs, but his return doesn't make him a lock for the starting role.

In another offseason move, Kansas City brought in Long, a longtime guard for the Chicago Bears. While Long has experience at both tackle and guard, it's the latter where he's expected to contribute the most following his one-year retirement. Early rumblings from practice say Long had impressed in his short time with the Chiefs, but a knee injury has halted the hype train around him. Long is now likely to miss the remainder of offseason activities, including training camp and the preseason, with the hope that he could be back by Week 1.

Another player that has excited some people is Trey Smith. Kansas City's sixth-round pick was largely considered the steal of this year's draft as his talent has become obvious to many. Smith certainly has a path to become the Chiefs' right guard of the future, but I would be surprised if he starts there this season.

When it comes to who is going to start, Long looked to be the leader in the clubhouse, but with all the Chiefs' depth, his injury isn't a huge hit to the room. With that being said, the race for the starting position is starting to heat up.

Duvernay-Tardif hasn't been at OTAs, but head coach Andy Reid said he expects Duvernay-Tardif to be back for mandatory minicamp next week. His contract makes him virtually immovable, so he'll be in the hunt. As for Wylie, before Long's injury, he was likely competing for a roster spot rather than the starting spot, but now he'll be firmly in the conversation for the Week 1 starter. Barring a strong push from Smith, it's a two-horse race at this point. With Wylie's experience last season at that position and his attendance at OTAs, he could even be in the lead.

Overall, the room is crowded, but that turned out to be a good thing with the news of Long's injury. But when he gets healthy, there could still be some well-known names not make this year's team. With the talent infusion that has taken place during the offseason on the offensive line, it's a welcomed answer to a long-asked question.

For more daily Kansas City Chiefs coverage, subscribe to the Roughing the Kicker Chiefs Podcast wherever you get your podcasts.

Want a shortcut? Start listening to the show on Apple Podcasts, Google Podcasts, Spotify or iHeartRadio.

Become a true Most Valuable Listener and join the Roughing the Kicker Discord. Chat with Tucker, Jordan, Conner and other listeners of the podcast while having inside info on future content. Join here.

The K.C. Chiefs have announced a series of roster moves on Monday to alter the depth chart at multiple positions, although none of the transactions are going to move the meter much for fans. On Monday, the Chiefs made the previously reported signing of wide receiver Daurice Fountain official along...

Laurent Duvernay-Tardif Says He'll Return to the Chiefs in 2021

These are the Packers games fans are looking forward to most, according to ticket prices

GREEN BAY – Green Bay Packers ticket prices reflect fans' optimism that Aaron Rodgers will be under center more than the fear that he will not again wear a Packers uniform. When the NFL assembled its 2021 schedule, it clearly had in mind that Rodgers would be the Packers' quarterback, but, as always, other factors come into play. Among them, the fact that the league anticipates full stadiums this year, the quality of opponents and timing of games.

With the 2021 NFL offseason dwindling down and the draft in the rearview mirror, it is not too late to peer into the next offseason and speculate on how the future of the NFL will look. The salary cap will almost certainly be a hot topic yet for a couple...

Over the weekend, the K.C. Chiefs conducted their annual rookie minicamp, a welcome sign of player activity after last year’s completely cancelled in-person offseason due to the COVID-19 pandemic. As part of the process each year, the Chiefs not only have their official draft picks and rookie free agent signings on hand, but they also invite several other players to try out for the team this year as well—fringe players just hoping to turn the heads of coaches if given a chance.

Over the weekend, the Kansas City Chiefs — along with most of the rest of the NFL’s teams — conducted their three-day rookie minicamp, bringing in their six drafted rookies, eight undrafted rookie free agents, five unsigned rookies invited for tryouts and 10 younger players from the Chiefs’ roster — all of the latter with less than two years of experience in the league.

SportsBeat KC: Here’s how the Kansas City Chiefs rookies’ made most of first NFL camp

The Chiefs’ rookies got their first taste of the NFL during a weekend mini-camp. There weren’t as many first-year players as in previous offseasons, and there wasn’t contact. But coach Andy Reid said he was happy with the event, and we hear from him and the Chiefs’ first draft pick, second-rounder Nick Bolton from Mizzou, in this episode of The Star’s daily SportsBeat KC podcast. You’ll also hear from Star beat writers Herbie Teope and Sam McDowell, who attended the mini-camp and heard what the rookies had to say.

Some 81 Kansas City Chiefs showed up for Phase II of offseason workouts. That’s a lot

If you hold it, they will come ... even if it is considered voluntary. That’s apparently the stance in Kansas City for the Chiefs’ verions of Phase II of the NFL’s offseason workout program, which started across the league Monday morning. A total of 81 players, veterans and rookies, from...

May 17—Chiefs teammates Patrick Mahomes and Travis Kelce made not have won last year's American Century Championship celebrity golf tournament, but no one had more fun. Among their highlights: The duo chest-bumped after an eagle putt by Kelce and Mahomes also threw a pine cone at Kelce. The good times...

The timing of Eric Fisher’s Achilles injury couldn’t have been worse. With the Chiefs cruising in the AFC Championship Game, Fisher went down in the second half with a torn Achilles tendon. He missed Super Bowl LV, and after the season was cut by the Chiefs. Fisher, a left tackle,...

Under the league’s current Collective Bargaining Agreement, all undrafted NFL rookies must be paid the league minimum salary for their experience: $660,000. But so they can entice rookies to sign with them, teams are still allowed to give them signing bonuses and guarantee portions of their first-year salary. For the...

Three Things to Watch For During Chiefs OTAs

The Kansas City Chiefs' organized team activities — OTAs — start on Tuesday, taking another step in full-team preparation for the 2021 NFL season. While it's still extremely early in the offseason-to-preseason transition, there should be plenty of storylines to keep an eye on during these early workouts. Here are the three top questions I'll be asking and looking for answers to.

Former Bengals receiver Chad Johnson earned nearly $50 million in his 11-year NFL career, so perhaps wagering money doesn’t intrigue him. That would explain some of the oddball bets Johnson (who also goes by “Ocho Cinco”) made last week on Bleacher Report’s “DropZone” betting show. How strange? Well, here is...

Patrick Mahomes, Travis Kelce Among Chiefs Starters Not at Day 3 of OTAs

As the Kansas City Chiefs wrapped up a three-day stretch of organized team activities, they had several starters not appearing in Day 3, including Patrick Mahomes and Travis Kelce. Reported by a number of sources including Nate Taylor of The Athletic, Mahomes, Kelce and defensive tackle Khalen Saunders didn't participate...

People around the NFL have had their eyes on the saga surrounding Atlanta Falcons wide receiver Julio Jones and his potential trade destinations for quite some time, but the story took another step forward this past week. Chiefs Kingdom has been enamored with the idea of adding Jones to the...

The Tampa Bay Buccaneers signed cornerback Antonio Hamilton to a one-year deal, agent Drew Rosenhaus said Sunday. The veteran free agent tried out for the defending Super Bowl champions at their rookie minicamp this weekend. Hamilton, 28, played in all 16 games for the Kansas City Chiefs last season and...

The Kansas City Chiefs completed their 3-day rookie minicamp over the weekend. This was the first time that rookies, undrafted players and certain first-year players hit the field for Kansas City. It provided a first glimpse of what those players are capable of for the coaching staff, but also the first look for fans to see these new players in action.

Justifying Julio: Pros and Cons for the Chiefs to Trade for Julio Jones

'Tis the season of speculation. In his recent appearance (perhaps intentionally, perhaps unknowingly) on Fox Sports 1's Undisputed, Atlanta Falcons wide receiver Julio Jones was asked about his future in Atlanta. Jones said he is "out of there" and now it seems like the future Hall of Famer is going to be on the move this offseason. The Kansas City Chiefs never really invested in a Sammy Watkins replacement in the 2021 offseason and adding Jones to play opposite Tyreek Hill and Travis Kelce is quite an appealing idea.

Without Bashaud Breeland, the Chiefs' Philosophy on Cornerbacks Will Be Tested

Having reliable cornerback play is important in today's NFL. Some recently competitive AFC teams, unlike the Kansas City Chiefs, have made concerted efforts to secure that by investing heavily in the position. For example, the Baltimore Ravens have ranked in the top-five in spending at cornerback in each of the...

The Kansas City Chiefs' biggest offseason storyline was the complete and total overhaul of their offensive line. After an injury-plagued 2020 season across the line, the Chiefs added two Pro Bowlers and a handful of high-upside young players in hopes of building a line that looks more like the Chiefs' unit from the early 2000s than the end of 2020.