Giant holes on beaches can be dangerous for people, sea turtles 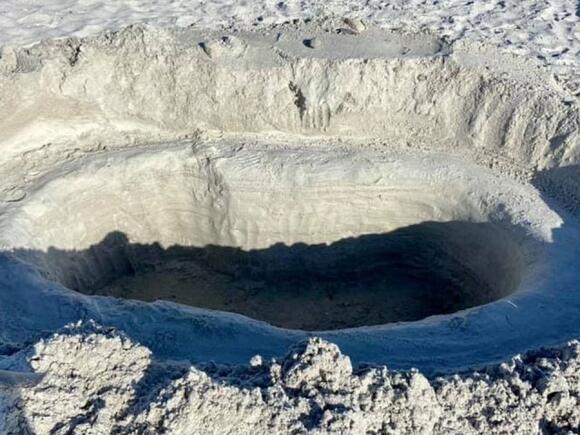 There are holes up and down Treasure Island's beach.

While some are big and some are really big, many are potentially dangerous.

"That is the biggest hole I have seen," said Carrie Auerbach.

Auerbach is a beach ambassador in Treasure Island who used to concentrate on beach clean-up, but now she's on hole patrol.

"The next morning, I went out and thought maybe I could fill it in, but I couldn't make a dent. So we had to call the city to bring some equipment in," said Auerbach.

There's a concern people could fall into one of these holes if they aren't paying attention or are walking on the beach when it's dark.

Aside from the concern for people, it's also nesting season for sea turtles that go on to the beach to lay eggs, and eventually, the babies will hatch and could fall in on their way to the ocean.

"We have five different sea turtles here. Some of them are endangered species. So we want to help out," said Auerbach.

The fire department wants to help too.

"I drove the beach yesterday with my fire chief and we found multiple yesterday that were (large) enough to damage a vehicle," said Treasure Fire Department Captain Jeff Logsdon.

Digging holes isn't the problem. It's not filling them back in, which actually violates a city ordinance.

"I want people to come to enjoy our beach. Come have a good time. Dig a hole. Just please fill the hole before you leave," said Logsdon.

Officials are going around to hotels and even places that sell shovels, asking them to remind people how dangerous leaving these big holes can be.

The zoo gained a rare new family member thanks to a Species Survival Plan.

Scientists believe the blue-green algae called Lyngbya, growing at an alarming rate in Tampa Bay, could be a result of the 215 million gallons of polluted wastewater released from Piney Point in April.

Pinellas issues warning for breathing issues due to red tide

Florida Department of Health in Pinellas County warns respiratory issues could be caused by a red tide bloom and are advising beach goers to avoid it.

The Florida Fish and Wildlife Commission said its found medium concentrations of bloom levels of red tide in waters off Hillsborough, Pinellas, and Manatee Counties. Some of the samples came from Pass-A-Grille, Indian Shores, Redington Beach, and Redington Shores.

U.S.C.G. confirms they worked to recover a father and son from the water near Apollo Beach Friday night. Sadly they both were pronounced dead and another man is still missing.

Pasco County heroes save woman and kitten on the same day

“It’s a blessing to help out in that matter. Just to come here and help that cat and then back to back, assist this lady. It was great," said Feliciano.

Woman attacked by alligator is recovering at Tampa hospital

The woman attacked by an alligator in Palm Harbor is recovering at a hospital in Tampa.

Woman bitten by alligator while walking her dog, FWC says

A woman was bitten by an alligator while walking her dog by a pond in Palm Harbor.

As the Tampa Bay area rebounds from the pandemic and more people get vaccinated, 4th of July events are starting to take shape after most were canceled last year.

A carousel horse at a park has been removed after the city was made aware of it's insensitive imagery.

Tampa gym focuses on getting kids back in shape

South Tampa CrossFit is clearing out the adults and making room for kids a few hours every day as they offer a CrossFit For Kids Summer Camp.