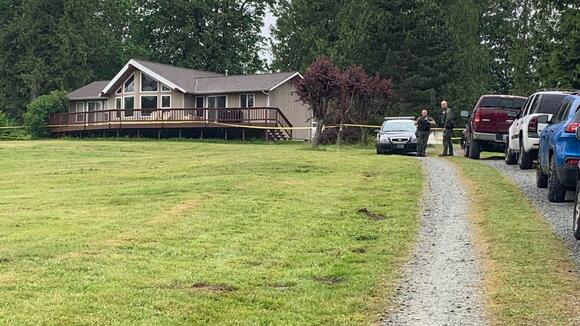 The investigation scene is in the 400 block of 200th Street Northwest near Arlington , where a 23-year-old woman was killed.

According to deputies, a friend reported that his friend killed his girlfriend.

After 9:30 a.m., Kirkland police received a call from a 25-year-old man who said he killed his girlfriend in the morning.

The 25-year-old man reportedly turned himself in.

FEDERAL WAY, Wash. — Multiple people were taken to the hospital after a crash on Tuesday night in Federal Way. At about 7:45 p.m., crews responded to a report of a crash that involved several cars in the 37400 block of Pacific Highway South in Federal Way. The crash blocked...

SEATTLE — Arson detectives from the Seattle Police Department were back at a homeless encampment in the Mount Baker neighborhood Tuesday afternoon, looking for signs of any suspicious activity related to a deadly fire. Fire crews found the bodies of two people – a man and a woman – after...

Police: Man found shot in car with 2-year-old child inside in Burien

BURIEN, Wash. — Police are investigating a shooting that left a man injured Tuesday night in Burien. At 8:18 p.m., several people called 911 and reported hearing gunshots and a crash at Southwest 129th and 4th Southwest. When officers arrived, they found a man in a car with gunshot wounds...

MUNSTER, Ind. — A man dressed in a white hazmat suit robbed an Indiana bank on Tuesday afternoon, authorities said. According to Munster Police Department spokesperson Lt. John Peirick, the man walked into a Fifth Third Bank wearing the white suit, blue hard hat, goggles and a mask covering his face from his nose to his chin.

SEATTLE — The mother of the 19-year-old killed last year at the Capitol Hill Organized Protest zone is speaking out after a Friday night shooting nearly claimed the life of the teen’s father. This, just days before the anniversary of her son’s murder. Four men were shot in what eyewitnesses...

KING COUNTY, Wash. — King County Public Health announced a major milestone in COVID-19 vaccination rates on Tuesday, bringing an end to the countywide mask directive by the end of the month. Tuesday marked a big day for King County, as 70% of residents ages 16 and older received their...

CHICAGO — At least five people were injured Tuesday night when gunfire erupted in Chicago’s West Garfield Park neighborhood, authorities said. According to WBBM-TV and the Chicago Sun-Times, the incident occurred shortly before 9:30 p.m. on West Monroe Street. A shooter or shooters opened fire on a group of people, wounding a 29-year-old woman and four men, ages 40, 39, 38 and 33, the Sun-Times reported.

SEATTLE — Major changes are coming to Pier 46 near Pioneer Square, now that the Port of Seattle is not building a cruise ship terminal. Plans are in the works to train future longshoremen and women. There is a real shortage of people trained to offload the ships that are...

EAST FINLEY TOWNSHIP, Pa. — Human remains were found inside a burned vehicle in East Finley Township, Washington County, the coroner's office said Monday. The discovery was made Sunday on Maple Road. The remains have not yet been identified, and it has not been determined how the person died. State...

King County: In response to the increased illegal street racing and street/freeway takeover activities across the region, and inherent recklessness of those in attendance the Washington State Patrol (WSP) and multiple other police agencies throughout the Puget Sound region have come together to focus on this important public safety issue. In early 2021 multiple King, Pierce, and Snohomish county police agencies came together and coordinated their efforts to respond to, and investigate illegal street racing related incidents in the region. In addition to law enforcement collaboration, local municipal and county prosecutors have voiced their support and dedication to improving public safety in responding to this significant public safety issue.

LAKE STEVENS — A driver in a Tesla that was on “autopilot” reportedly hit a Snohomish County Sheriff’s Office patrol SUV while it was parked on the side of a road Saturday. The deputy was in the 25200 block of 103rd Avenue NE because a vehicle earlier had hit and...

LAKE STEVENS, Wash. - A Tesla in autopilot mode crashed into a Snohomish County deputy's patrol car over the weekend, causing significant damage, sheriff's officials said. The incident unfolded Saturday as the deputy responded to the 25200 block of 103rd Ave NE, where a vehicle had crashed into a power pole and sheared it in half.

YAKIMA COUNTY -- Washington State Patrol say Bonnie Stewart, 51, of Pasco, was struck and killed by a suspected drunk driver on SR 823 near the town of Pomona just north of Selah. According to a crash report released by WSP, Stewart was walking in a construction zone on SR...

The FBI and other officials say one person directly linked to the massive unemployment fraud in WA state in 2020 has been arrested. The ESD (Employment Security Department) fraud, believed to be the biggest in state history, is still being unraveled. During the early stages of the COVID pandemic, the...

SEATTLE – A Nigerian citizen was arrested at New York's JFK Airport and charged with wire fraud in a scheme to steal over $350,000 in Washington state unemployment benefits, federal officials said. Abidemi Rufai, aka Sandy Tang, 42, of Lekki, Nigeria, was arrested Friday night and made an initial court...

DUI driver rolls over guardrail above I-90 in Moses Lake

MOSES LAKE - Washington State Troopers say a Yakima man is recovering from some minor injuries after a rollover crash in Moses Lake early Saturday. Washington State Patrolman John Bryant says 50-year-old Gary Wolf was under the influence, which resulted in him driving erratically as he approached the Hiawatha Road overpass above I-90 at around 5:28 a.m.

Darren Rice, 22, from the Seattle, Washington, area was arrested early Monday on Swan Point Drive northeast of Rome after threatening to kill a family member. When police arrived, Rice resisted arrest, screaming obscenities as he was being placed into a patrol vehicle. After he got to the jail, he gave a false name.

OLYMPIA, Wash. – A 42-year-old Nigerian national wanted for wire fraud in Washington state has been arrested at JFK Airport in New York. The man is charged with trying to bilk the Employment Security Department out of over $350,000 in unemployment benefits in April 2020. The suspect, who was trying...

Authorities arrested a Nigerian citizen suspected of playing a role in a scam that saw nearly $650 million get paid out in fraudulent unemployment claims in Washington state last spring. State Auditor responds to ESD’s claim that audit numbers are ‘inflated’. Abidemi Rufai, 42, was apprehended last Friday by authorities...