WRFC AM 960 The Ref is Athens sports radio online. Georgia Football, baseball, and basketball. Falcons, Braves, and Hawks too! 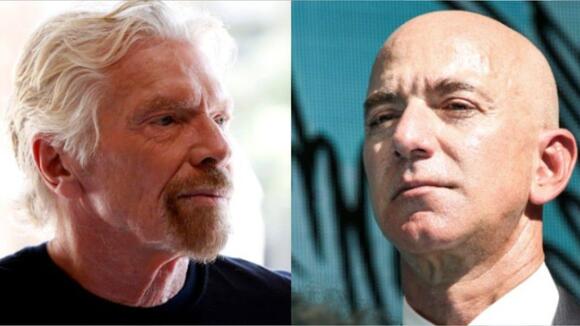 Days after Amazon founder Jeff Bezos announced he was going to rocket into space, there is speculation that Virgin Galactic founder Richard Branson will be trying to beat him to the final frontier.

The “Today” show called it the billionaire space race.

The morning show reported that both Bezos’ Blue Origin and Branson’s Virgin Galactic have launched successful missions to eventually take tourists into space.

Blue Origin will take six passengers to the edge of the atmosphere on a remote controlled capsule for a 3-minute weightless experience.

Virgin Galactic will have multiple ships which also carry six people but are flown by pilots.

Bezos said he will launch on July 20, the anniversary of the moon landing.

Despite congratulating Bezos, Branson is said to be eying the July 4 weekend to take his outer space flight, beating Bezos by about two weeks.

The speculation was reported by space blog Parabolic Arc.

Virgin Galactic responded with a statement to the blog:

“We are in the process of analyzing the data from our successful May 22nd flight. As previously announced, we expect to complete the final test flights this summer through to early fall. At this time, we have not determined the date of our next flight. An objective from the last flight was to collect data to be used for the final two verification reports that are required as part of the current FAA commercial reusable spacecraft operator’s license,” a Virgin Galactic spokesperson said.

Regardless of what Virgin Galactic has planned, it still needs the OK from the Federal Aviation Administration, sources told Parabolic Arc, according to Geek Wire.

But Geek Wire reported that talk of Branson’s potential July 4 flight is false, due to existing policies for analyzing test data and assessing flight safety.

WRFC AM 960 The Ref is Athens sports radio online. Georgia Football, baseball, and basketball. Falcons, Braves, and Hawks too!

In the past week, U.S. senators have busied themselves by attempting to cross an aisle as treacherous as the River Styx and come to a bipartisan agreement on a historic $1 trillion infrastructure deal. And even without a psychopomp to see them through, it appears that Democrats and Republicans are nearing a deal.

The People Have Spoken: Jeff Bezos Should Go to Space and Stay There

Amazon founder Jeff Bezos is going to space next month, and more than 60,000 people have signed petitions politely requesting he stay there. The 57-year-old Bezos and his brother Mark will be passengers on the first human spaceflight conducted by Blue Origin, the aerospace company he founded more than two decades ago.

Over 60,000 sign petitions to stop Jeff Bezos from returning to Earth

More than 60,000 people have signed petitions to stop Jeff Bezos from returning to Earth after his Blue Origin space flight next month. Days after the Amazon founder announced earlier this month that he and his brother Mark would fly on his space tourism company’s first passenger flight to space, two petitions launched calling to prevent Bezos from coming back home.

Jun. 21—Some people may be excited about Jeff Bezos' upcoming trip to space for a different reason. Mainly, a possibility he might not return. A petition garnering more than 43,000 signatures is proposing we don't allow Bezos to return to his home planet after Blue Origin's first crewed flight to space on July 20.

Three days after the Amazon founder announced his trip to space with his aerospace company Blue Origin, someone launches the petition titled 'Do not allow Jeff Bezos to return to Earth'. AceShowbiz - For some reasons, people would love it if Jeff Bezos doesn't return to the Earth following his...

Why Is Your Government Giving Jeff Bezos $10 BILLION To Go To Space?!

Jeff Bezos and his brother will be flying to space on the first crewed flight of the Blue Origin rocket 'New Shepard'. But whilst Bezos and Elon Musk race to get to the moon, how do they treat their workers on earth?. #JeffBezos #ElonMusk #…

The petition isn’t big on details, simply titled “Do not allow Jeff Bezos to return to Earth,” but it’s getting some attention. “Billionaire’s should not exist ... on earth, or in space, but should they decide the latter they should stay there,” reads the description on the change.org offering that seeks to get 50,000 signatures so it can be one of the top signed petitions on the site.

Jeff Bezos Gets Shafted Online Over the Shape of His Big Rocket!

When you have the kind of money that Amazon founder and super-billionaire Jeff Bezos has you can do whatever you want. And Bezos wants to go to outer space. It was announced that Bezos, his brother and two unnamed guests plan to launch to space aboard Blue Origin’s New Shepard rocket.

According to online sources, more than 46 thousand people have signed petitions, the authors of which urge not to let the head of Amazon Jeff Bezos back to Earth after a planned flight into space next month with his participation. This information is confirmed by the relevant petitions posted on the change.org platform.

How far off are companies from frequent space travel?

Editor’s note: Don Lee is taking a break from his column this week. This is representation of a piece from Feb. 16, 2019. We have not visited space lately so we will check into some of companies and their successes. I remember when I was in high school, my science...

ORLANDO, Florida: Space Perspective, which plans to bring tourists to space inside a capsule tethered to a balloon, successfully flew its giant stratospheric balloon 20 miles over the Earth on Friday. The balloon lifted off near Kennedy Space Center and splashed down 6 hours and 39 minutes later in the...

Amazon founder Jeff Bezos made news recently when he said he was going to space next month with his aerospace company Blue Origin. Three online petitions want Bezos not to return to Earth. One of the petitions says, “Billionaire’s should not exist…on earth, or in space, but should they decide the latter, they should stay there. Do not allow Jeff Bezos to return to Earth.” More than 41,000 people have signed one of the petitions. Unfortunately for them, Bezos will only be in “space” for 11 minutes before he comes back to the planet.

‘Billionaires should not exist’: Thousands sign petitions calling for Jeff Bezos not to return from space trip

Amazon CEO Jeff Bezos will embark on a trip to space soon—and tens of thousands of people don’t want him to come back to Earth afterward. Last month, Bezos’s space company Blue Origin announced that he and his brother Mark Bezos will be among the first crewed flight of the rocket ship New Shepard when it takes off on July 20. The ship will also take another person who bid $28 million to be on the flight.

Jeff Bezos and his brother, Mark, are scheduled to jettison themselves into the cold void of space on July 20, alongside an auction winner who paid $28 million for their seat and one additional passenger (presumably with at least some degree of aeronautic experience). The trip is scheduled to last 11-minutes aboard the New Shepard — the reusable rocket designed and built by Bezos’ spacefaring glamour project, Blue Origin. At least 50,000 people would like that flight time to last much, much longer.

Tens of thousands of people have signed petitions calling for barring Amazon CEO Jeff Bezos from returning to Earth after his planned flight into space on July 20, NPR reports. Bezos announced earlier this month that he and his brother, Mark Bezos, would be on board when the New Shepard suborbital rocket system built by his space exploration company, Blue Origin, makes its first flight carrying people.

The Internet Petitions to Deny Jeff Bezos Reentry Into Earth

In a strange turn of events, online petitions have emerged to prevent Jeff Bezos’ re-entry into Earth next month. A few days ago, the Amazon boss had announced that he would fly into space aboard Blue Origin’s New Shepard Rocket on July 20th. The petitions have gained much traction since their launch and over 40,000 people have already signed the one on Change.org.

NASA is keeping a watchful eye on Jeff Bezos and other billionaires competing in the space race, according to the agency's chief

NASA Administrator Bill Nelson said he is keeping an eye on Jeff Bezos' space plans. Space won't be the Wild West for billionaires, Nelson suggested in a FoxBusiness interview. His message addresses a rise in commercial space travel fuelled by the ultra-wealthy. See more stories on Insider's business page. It's...

Jeff Bezos will step down as Amazon CEO in 2 weeks on July 5, a 'sentimental' date he picked because it was when the company was incorporated in 1994

Amazon CEO Jeff Bezos told shareholders he picked the date because it was "the day Amazon was incorporated in 1994, exactly 27 years ago."

Why over 80,000 people want Jeff Bezos to stay in space