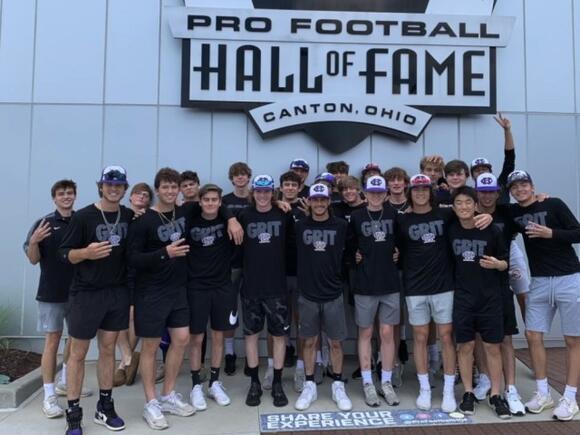 "It's unbelievable," CHCA coach Tony Schulz said. "So proud of our guys. They work so hard for this. All the way back to September it's been their goal to get to this game and have a chance to compete for a state title and we couldn't be more thrilled for them."

CHCA is making its fourth state tournament appearance. Sunday will be the second state final in program history. CHCA was the 2014 Division III state runner-up.

CHCA played in the first game of the Ohio High School Athletic Association state tournament Friday after the OHSAA delayed the tournament a day due to weather on Thursday.

The early-morning start didn't faze the Eagles, who spent time in Northeast Ohio visiting the Pro Football Hall of Fame on Thursday.

CHCA jumped out to a 3-1 lead after the first inning Friday. The Eagles added runs in the second, fourth and sixth.

Junior Will Murphy tripled to left field in the bottom of the first to help score two runs for the Eagles. He also earned an RBI in the sixth. Murphy scored later that inning after junior Andrew Brock tripled down the right-field line.

Junior pitcher Colin Ames was solid on the pitching mound. He allowed just one run on four hits in five innings. He struck out seven batters.

"He had his fastball working," Schulz said. "We know if he fills up the zone, if he stays in the strike zone he's a tough guy to hit and he showed that today."

"He's just a great kid and probably had the game of his life today with what he did at the plate driving in the runs and then coming in and closing out the game on the mound," Schulz said. "It was so awesome to see him do that."

CHCA is scheduled to practice at nearby University of Akron on Sunday in preparation for Sunday's state final.

"Our message is what's it been ever since we made it to the regional and that is soak up every single moment and enjoy being here," Schulz said. "We've done everything we can do at this point. Whatever happens is going to happen. They're going to go out, they're going to execute and whatever happens, happens. But, just enjoy it and stop and smell the roses every now and then look around and just realize how lucky you are to be in this spot."

TQL Stadium will host a World Cup qualifying match on Nov. 12 between Team USA and Mexico.

Purcell Marian freshman wing Dee Alexander has 18 scholarship offers, but the girls basketball standout has kept the attention in perspective this summer as she shifts her focus to the high school season.

“You just feel that excitement that you forgot that you missed,” Bengals head coach Zac Taylor said. “Now that it’s back, I know that our players are juiced up. Our fans, our coaches, everybody’s ready to get a full crowd out here and get after it.”

Athletes face pressure to succeed even in youth sports

American gymnastics star Simone Biles announced she was withdrawing from the individual all around competition; her decision has sparked conversation around athletes' mental health and the immense pressure many who dream of Olympic gold face from a young age.

Crowds gathered early on Saturday at MVP Sports Bar and Grille in Silverton to cheer on Rose Lavelle and the US Women's National Team in the Tokyo Games.