By Thomas Colson
Posted by
Business Insider
13 days ago 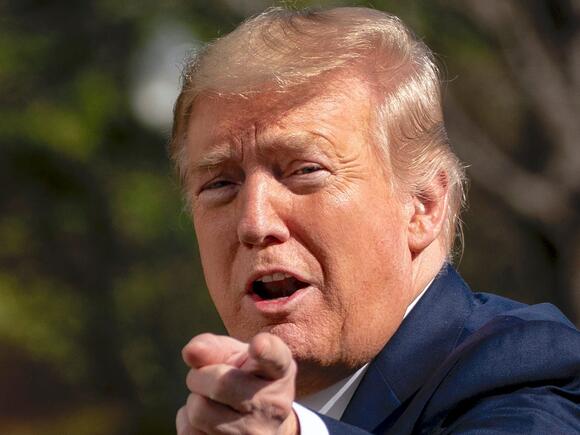 Former President Donald Trump has been spotted wandering into memorial services and engagement parties at his Mar-a-Lago resort in recent weeks as he seeks "adulation" from members of the public, Bloomberg reported .

The president has lived in private quarters at his Mar-a-Lago resort since leaving the White House in January, but he frequently mingles with the wealthy crowds who pay huge membership fees to be a part of the club.

One Mar-a-Lago member told Bloomberg that Trump had walked into a club memorial for a friend, made a speech, and then stayed around afterward.

"A Mar-a-Lago member who recently attended a club gathering for a deceased friend was surprised when Trump sauntered in to deliver remarks and then hung around, apparently enjoying himself," Bloomberg reported.

Former associates of Trump speculated that the former president was enjoying the attention that comes with attending the events.

"Donald Trump needs the adulation of the crowd the way you or I need oxygen to breathe," Michael Cohen, Trump's former personal lawyer, told Bloomberg.

The president has sought to maintain a strong grip on the Republican Party from his Mar-a-Lago base, targeting GOP lawmakers such as Rep. Liz Cheney, who voted this year to impeach him, and praising those friendly to him.

He has also hosted a steady stream of Trump-friendly visitors at Mar-a-Lago this year, including House Minority Leader Kevin McCarthy, whom Trump summoned to meet with him in January.

Florida has become something of a magnet for other figures in Trump's orbit since he moved there, with a few having purchased houses in the state this year, Bloomberg reported .

These include Ivanka Trump and Jared Kushner, his daughter and son-in-law; Donald Trump Jr. and his girlfriend; and Fox News' Sean Hannity.

Read the original article on Business Insider
View All 1101 Comments

Ivanka Trump and her husband, Jared Kushner , have been distancing themselves from former President Trump 's claims about the 2020 election, 12 former Trump White House and administration officials, family friends, acquaintances and members of Trump's team told CNN. The sources noted Ivanka Trump and Kushner were not around...

The utter predictability of Jared and Ivanka ghosting Donald Trump

(CNN) — Here's the paragraph you need to read today:. "With each passing day away from Washington, former President Donald Trump's grievances continue unabated. And those complaints appear to be driving away two of the people who were closest to him during his White House tenure: his daughter Ivanka Trump and son-in-law, Jared Kushner."

Trump has ‘zero desire’ to be speaker of House, spokesman says

Donald Trump has “zero desire” to be speaker of the House of Representatives, a spokesman said, after the former president discussed the outlandish idea. Nancy Pelosi, a Democrat, is the current House speaker. Republicans under the minority leader, Kevin McCarthy, hope to retake the chamber next year. Trump was ejected...

Trump hired Ivanka and Jared Kushner. Time for Biden to reverse the trend.

Somehow, three of senior White House adviser Steve Ricchetti's children have landed jobs in the Biden administration, including J.J. Ricchetti, who, fresh out of college, will be handling legislative matters at the Treasury Department. A fourth Ricchetti child is working for a member of Congress. Government, after all, is a good family business.

Federal Election Commission filings show that the six-figure sum was paid in May to Trump's Mar-a-Lago, a month after the April donor event. The payment is just the latest from Republican officials to a venue owned by the former president. Walter Shaub, the former director of the Office of Government...

Former President Donald Trump's frequent visits to his New Jersey golf resort during his tenure in the White House cost taxpayers more than $2 million—with Trump spending a total of 99 days at the Bedminster club while serving as commander in chief. NJ.com reported on Saturday that the bill to...

WASHINGTON — A modern presidential tradition is poised to return to the White House — at least in part. President Joe Biden plans to host a White House ceremony this year for the unveiling of former President Barack Obama’s official portrait, according to people familiar with the discussions. And former President Donald Trump has already begun participating in the customary process so his official portrait can eventually hang alongside his predecessors, according to an aide and others familiar with the discussions.

The Donald’s successes and failures leave lessons for his successors.

Former President Donald Trump wished President Joe Biden luck on his visit with Vladimir Putin and encouraged him not to fall asleep during the meeting. “Good luck to Biden in dealing with President Putin — don’t fall asleep during the meeting, and please give him my warmest regards!” Trump said in a statement via email on Friday, alluding to his commonly used nickname “Sleepy Joe,” given to Biden on the 2020 campaign trail.

Ivanka Trump is focusing on her family while living in Florida with her husband Jared Kushner, sources familiar with the couple’s plans told Fox News, following four years in Washington, D.C., serving in the Trump administration. Ivanka Trump, who served as a senior adviser in her father’s administration, is "focusing...

Rubio may still want to be president one day. He's content to wait out Trump.

When Sen. Marco Rubio ran for president the first time, he was in a hurry. But now, Rubio, R-Fla., is gearing for a third Senate bid, and he appears OK to wait. "You can be the world's greatest surfer and you can show up to the beach with the best surfboard you can imagine," he said in a recent interview when asked about his ambitions for 2024. "But if there's no waves that day, there's nothing you can do about it."

Fox News host Sean Hannity ripped into the New York Times for its lack of devotion to covering President Joe Biden the way it did former President Donald Trump. “And with all the venom, all the hate, all the ink, the vitriol, they are all clearly addicted to all things Donald Trump, and the reality is, psychologically, for them, they cannot quit their psychotic addiction to Donald Trump. They miss him more than anybody,” Hannity said during the Tuesday segment.

(CNN) — The Trump Organization's chief financial officer is staring down a decision: whether to cooperate with prosecutors against former President Donald Trump and the Trump Organization or potentially face criminal tax-related charges. The Manhattan district attorney's office and New York attorney general's tax investigation into Allen Weisselberg, involving a...

Inside the extraordinary effort to save Trump from covid-19

This article is adapted from “Nightmare Scenario: Inside the Trump Administration’s Response to the Pandemic That Changed History,” which will be published June 29 by HarperCollins. Health and Human Services Secretary Alex Azar’s phone rang with an urgent request: Could he help someone at the White House obtain an experimental...

Donald Trump recently exited the confines of Mar-a-Lago, following a familiar path traveled by many snowbirds: the former president relocated for the summer to his Bedminster golf club in New Jersey. From a distance, it's easy to imagine Trump surrounded by a small army of sycophantic former White House aides,...

If the 80 million Americans who voted for Joe Biden were hoping to purge the Trump name from our government, the sigh of relief we all heaved on January 20 may have been premature.The names and faces of the Trump children have all been etched into our memories since 2017, when President Trump put his adult sons, Don Jr. and Eric, in charge of his business, and after he gave his eldest daughter, Ivanka, a White House appointment. Trump’s defeat in the 2020 election was soon followed by every major social media app deplatforming him following the January 6 Capitol...

Nikki Haley is seeking a course-correction after a falling out with Trump World earlier this year left her isolated from some top conservatives. The former U.S. ambassador to the United Nations will headline the Iowa GOP’s annual Lincoln Dinner in Des Moines on Thursday, the latest step in a months-long effort to rehabilitate her image in conservative circles after criticizing former President Trump over the Jan. 6 riot.