By Reuters Staff
Posted by
Reuters
2 days ago 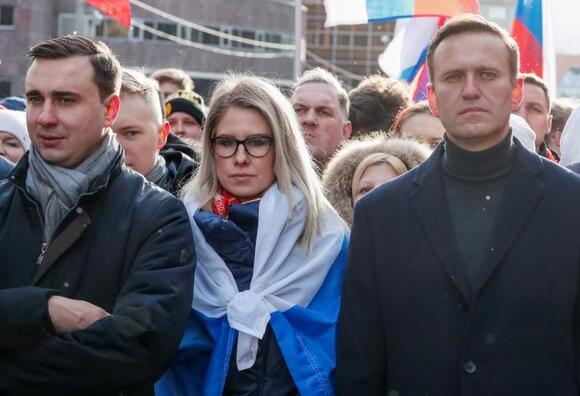 MOSCOW (Reuters) - Ivan Zhdanov, a close ally of Kremlin critic Alexei Navalny and the head of Navalny’s anti-corruption foundation, has been put on a federal wanted list, according to Russia’s interior ministry.

A Russian court this week ruled that the foundation was an extremist organisation, effectively outlawing it.

Some US allies near Russia are wary of Biden-Putin summit

KYIV, Ukraine (AP) — Central and Eastern European nations are anxious about the coming summit meeting between U.S. President Joe Biden and Russian President Vladimir Putin, wary of what they see as hostile intentions from the Kremlin. Some in the countries that once were part of the Soviet Union or...

Stoltenberg's comments come just ahead of an anticipated summit between U.S. President Joe Biden and his Russian counterpart Vladimir Putin in Geneva on June 16. And they follow Putin's interview with NBC News aired Saturday during which the Russian leader said that the U.S.-Russian relationship "has deteriorated to its lowest point in recent years."

“Today it became clear from the MVD database that Zhdanov was included in the federal list,” Voronin said. He added that “it is not yet known what is linked to him, possibly one of the many criminal investigations being conducted against him, but it is not yet clear who he is with.” One of the lawsuits concerns the non-payment of 29 million rubles to businessman Yevgeny Prigozhin, as ordered by the court. The committee is also conducting an investigation into the establishment of a non-profit organization allegedly interfering with citizens’ rights. It was founded with Navalny and his other collaborator Leonid Volkov.

When did Russia become independent

In its long and brutal history, there was only one time when Russia was conquered by another state. Despite suffering major defeats and losing wars, Russia has always retained its independence. Only the Mongol invasion was a bitter exception. In 1922, the word "Russia" once again disappeared from the political...

The European Union on Thursday denounced a Russian court ruling that branded “extremist” the political organisations of jailed Kremlin critic Alexei Navalny and barred them from working. “Yesterday’s ruling by a Moscow Court to label Mr Alexei Navalny’s organisations as ‘extremist groups’ marks the most serious effort to date by...

Russia on Thursday suggested that Washington was quick to condemn the designation of Alexei Navalny’s groups as extremist because the jailed Kremlin critic was in fact working for the United States. A Moscow court late on Wednesday ruled to designate Navalny’s regional offices and his Anti-Corruption Foundation (FBK) as “extremist”,...

Reacting to the news that a Russian court designated three organizations founded by Aleksei Navalny as “extremist”, Natalia Zviagina, Amnesty International’s Moscow Office Director, said:. “With this decision, the Russian authorities have equated the activities of civil society organizations with serious crime, placing tens of thousands of Navalny’s supporters at...

Alexei Navalny, the jailed Russian opposition leader, has vowed to fight on despite a court ruling outlawing his entire movement, saying he is supported by millions of Russians who will keep fighting against President Vladimir Putin's corrupt regime. The landmark ruling marks the Kremlin’s most daring attempt to do away...

Lisbon mayor Fernando Medina has faced calls to resign after his city hall shared with Moscow details of three Russian organisers of a rally in support of the jailed Kremlin critic Alexei Navalny.Mr Medina said the sharing of the activists' details was a "bureaucratic error" as he made a public apology on Thursday. "This should not have happened," he told reporters."The position of Portugal and the European Union is in line with the one expressed by the protesters, of great concern with human rights violations, with the demand for the release of Navalny from prison."But the mayor, from Portugal's ruling...

US-Russia relations are so poor that only a summit can sort them out, Putin's spokesman says

Moscow (CNN) — Russian President Vladimir Putin is going to Geneva, Switzerland, not merely to appear on the same platform as US President Joe Biden, but because "the poor state of relations" between both countries demands a summit, Kremlin spokesman Dmitry Peskov told CNN in an exclusive interview on Friday.

Poland Detains Man On Suspicion Of Spying For Russia

Polish prosecutors have arrested a man they say was acting as a spy for Russia and placed him in pretrial detention for three months. 'The suspect carried out his activities in Poland, the European Union, and other countries, which was part of the Russian propaganda and disinformation projects undertaken in order to weaken the position of the Republic of Poland in the EU and in the international arena,' the National Public Prosecutor's Office said in a statement on June 10.

DMITRY BYKOV is a prodigious polymath of Russian letters and journalism. He has written prize-winning biographies and was part of a team that created “Citizen Poet,” a hit series online and on television offering biting political satire. For a decade, he has been a leading voice in opposition to Russian President Vladimir Putin. On April 13, 2019, traveling with his wife, Ekaterina Kevkhishvili, he arrived at Novosibirsk in Siberia for the first stop in a three-city lecture tour. Unbeknownst to Mr. Bykov, two officers of the Federal Security Service (FSB) arrived just hours before he did.

KYEV, Ukraine — Ukrainian Foreign Minister Dmytro Kuleba sat down with the Washington Examiner recently to discuss the challenges facing his country, including a desire to join NATO and ward off Russia and his hopes for the Biden administration. The timing could not be more tense in the former Soviet...

MOSCOW – A Moscow court is expected Wednesday to outlaw the organizations founded by Russian opposition leader Alexei Navalny — part of authorities' efforts to muzzle critics ahead of a crucial parliamentary election in September. Prosecutors have asked the Moscow City Court to designate Navalny's Foundation for Fighting Corruption and...

MOSCOW (Reuters) -A Russian court on Wednesday outlawed groups linked to jailed Kremlin critic Alexei Navalny after declaring them "extremist", a move that bans his allies from elections and will further strain U.S.-Russia ties before a closely watched summit. President Vladimir Putin and U.S. President Joe Biden are due to...

MOSCOW (Reuters) - A Russian court on Wednesday approved a request by prosecutors to declare organisations linked to jailed Kremlin critic Alexei Navalny "extremist" in a move that outlaws the groups, his lawyers said on social media. The ruling, which takes effect immediately, effectively bars the groups' members from running...

Russia has outlawed organisations founded by jailed opposition activist Alexei Navalny by judging them “extremist”, a label that bans his supporters from running in elections and threatens them with years in prison. A Moscow court ruled on Wednesday that Navalny’s Anti-Corruption Foundation (FBK) and his nationwide network of political activists...