By Reuters
Posted by
Reuters
2 days ago 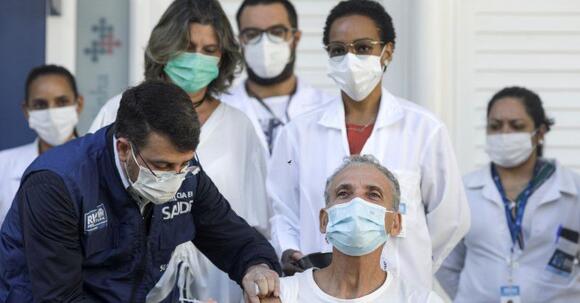 Brazil health regulator Anvisa on Friday said it had approved use of the Pfizer/BioNtech COVID-19 vaccine for children over 12 years of age.

Anvisa said it approved the measure after seeing studies, conducted outside Brazil, that showed safety and efficacy for the age group.

The vaccine, the first in Brazil to receive definitive approval from Anvisa, was already authorized for use on adolescents aged 16 and over, the regulator said. It added that the Pfizer vaccine was currently the only one authorized to be used on minors.

(Reuters) - The European Commission on Friday authorized Pfizer and partner BioNTech SE's COVID-19 vaccine for use in children as young as 12, paving the way for a broader roll-out in the bloc after similar clearances in the United States and Canada. The decision comes after European Medicines Agency (EMA)...

Pfizer and Moderna, the first two COVID-19 vaccine producers approved in the U.S., hope to have shots for children ready by the fall. Pfizer announced Tuesday it has begun testing on children aged 5 to 12, with hopes to apply for emergency use authorization from the U.S. Food and Drug Administration by September. It will also begin testing vaccines in children between 6 months and 2 years old in the coming weeks, with hopes to have results for them in either October or November. The news comes weeks after Pfizer’s vaccine was given emergency approval for children between 12 and 15, and almost three months after Moderna announced its own trials for children aged 6 months to 11, with its results set to be ready by the end of the summer. Moderna has also achieved success for children aged 12 to 17 and plans to apply for emergency use authorization this month. Last week, Moderna applied for full approval of its vaccine for adults.

AP source: US buying 500M COVID-19 vaccine doses from Pfizer to share with global vaccine program over next year

(Reuters) – The European Medicines Agency (EMA) on Friday approved a new manufacturing site for the production of Moderna Inc’s COVID-19 vaccine finished product. The site is operated by Recipharm and located in Monts, France, EMA’s committee for human medicines said. (Reporting by Vishwadha Chander in Bengaluru; Editing by Shounak...

BRASILIA (Reuters) – Brazil’s health regulator Anvisa met with representatives of Johnson & Johnson subsidiary Janssen on Friday to discuss extending the expiry date of a batch of 3 million doses of its COVID vaccine bought by the South American nation. The batch of vaccines expires on June 27. Janssen...

How are Pfizer's and Moderna's Vaccines Faring Against Coronavirus Variants?

You've probably heard a lot in recent months about the emergence of new coronavirus variants. There have been some concerns that the COVID-19 vaccines that are currently available might not be as effective against these variants. In this Motley Fool Live video recorded on May 17, healthcare and cannabis bureau chief Corinne Cardina and Motley Fool contributor Keith Speights discuss how Pfizer's (NYSE:PFE) and Moderna's (NASDAQ:MRNA) vaccines are faring against the coronavirus variants.

Thailand has signed a purchase order for 20 million doses of the COVID-19 vaccine develop by Pfizer (PFE.N) and BioNTech (22UAy.DE) to be delivered before the end of this year, its health minister said. Details of the deal, delivery timeframe and the vaccine's approval by the Food and Drug Administration...

Canada will share up to 100 million doses of COVID-19 vaccines with countries in need, though a portion of this has already been announced, a government official said on Friday, adding that the domestic vaccination campaign will not be affected. The announcement will be made at the G7 meeting in...

Brazil reported 1,129 COVID-19 deaths and 37,948 new coronavirus cases, the Health Ministry said on Sunday. Nearly 490,000 people in the country have died from the virus during the pandemic, with 17.4 million people infected, the data show. Our Standards: The Thomson Reuters Trust Principles.

CORPUS CHRISTI – Driscoll Children’s Hospital is one of 40 hospitals nationwide and 100 hospitals worldwide participating in a Pfizer clinical trial for a COVID-19 vaccine for children younger than 12. Driscoll is the only clinical trial site for South Texas. The first participant, Sophia Gutierrez, 10, of Odem, was...

FRANKFURT (Reuters) – Germany’s health ministry on Sunday said Johnson & Johnson must deliver 6.5 million COVID-19 vaccine doses to Germany in July to make up for a shortfall expected in June after the U.S. Food & Drug Administration (FDA) told the company to dispose of millions of doses because contamination concerns.

Israel’s Health Ministry has announced a possible association between Pfizer’s COVID-19 vaccine and heart inflammation among men aged 16 to 30. Three teams of experts investigated the potential link to cases of myocarditis and submitted findings to the Ministry. Results involved 275 reported cases of myocarditis from December to May, 148 of which occurred around the time of vaccination. Some 27 cases cropped up after the initial dose against a backdrop of 5.4 million vaccinated individuals, while 121 cases occurred around administration of the second dose.

[The stream is slated to start at 8:30 a.m. ET. Please refresh the page if you do not see a player above at that time.]. A key Food and Drug Administration panel is holding a meeting Thursday to discuss the use of Covid-19 vaccines in children as young as 6 months old.

China has administered a total of 892.77 million doses of COVID-19 vaccines as of June 13, National Health Commission said on Monday. That compares with around 878.52 million doses given as of June 12, up approximately 14.25 million doses. Our Standards: The Thomson Reuters Trust Principles.

The Pfizer COVID-19 vaccine is protective against several SARS-CoV-2 variants that have emerged, according to new research presented in the journal mBio, an open-access journal of the American Society for Microbiology. While this is good news, the study also found that the only approved monoclonal antibody therapy for SARS-CoV-2 might be less effective against SARS-CoV-2 variants in laboratory experiments.

Pfizer (PFE.N) has cut July deliveries of its COVID-19 vaccine to Norway by 400,000 doses, delaying the Nordic country's vaccine rollout, the company and the Norwegian Institute of Public Health (FHI) told Reuters on Thursday. The news was first reported by Norwegian daily VG, citing Pfizer's Norwegian arm, and Geir...

India on Monday reported 70,421 new COVID-19 infections over the past 24 hours, the lowest since March 31, data from the health ministry showed. The South Asian country's total COVID-19 case load now stands at 29.51 million, while total fatalities are at 374,305, the data showed. India added 3,921 deaths overnight.

Thailand's recently launched coronavirus vaccination campaign was hit by confusion in the capital on Monday after at least 20 hospitals in Bangkok postponed COVID-19 inoculation appointments set for this week, citing delays in vaccine deliveries. The hospital announcements were made on their Facebook pages, while Bangkok's vaccine booking app also...

If you got either the Moderna or Pfizer COVID-19 vaccine for your first dose, you may not receive the same brand for your second dose. This guidance comes from the National Advisory Committee on Immunization and the Northwestern Health Unit says they’ll use the vaccines interchangeably depending on local vaccine supply.