'He didn't deserve any of that:' Father of SJ boy whose body was found in Vegas honors son at vigil 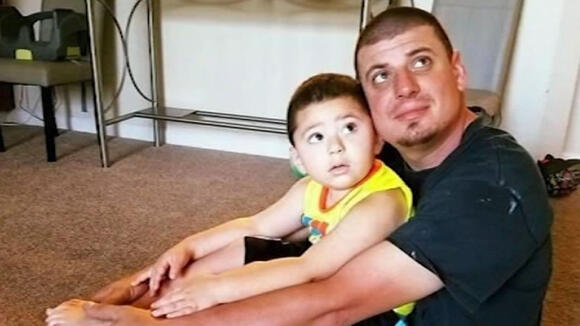 The father of Liam Husted, 7, the boy from San Jose whose body was found by hikers on a Southern Nevada trail, spoke at his son's vigil on Thursday. "Look how many people love you," Nicholas Husted said, as if he were talking to little Liam. RELATED: San Jose mother arrested after 7-year-old son found dead along Las Vegas hiking trail In front of a crowd of family and friends, Husted described Liam as a little boy with a big smile, who loved La Colina Park in San Jose. "This was his second home," Husted said. "Every time... every day...here," Liam's godfather, Michael Velasco added. "This is the park that he'd want to go." "That hill right there, he'd beat me up there," Husted continued. Now, the uphill battle to make any sense of what happened to his son. VIDEO: San Jose man details encounter with 'crying' boy before 7-year-old was found dead in Las Vegas

A South Bay man believes he had an encounter with 7-year-old son Liam Husted shortly before he was reported missing and ultimately found dead along a Las Vegas trail.

Liam's body was found on a trailhead outside Las Vegas on May 28. He was formally identified earlier this week, after investigators got a tip from a family friend who recognized a sketch of the child and called police. "He didn't deserve any of this," Husted told reporters on Thursday. "And that's the hardest part, is knowing that I wasn't there to protect him." Through a nationwide search, the FBI found and arrested Liam's mother, Samantha Moreno Rodriguez, 35, on Tuesday morning in Denver. "He did not deserve any of that," Husted said through tears. "And that's what I wanted him to know... That he was a good boy and he didn't do anything wrong." "And daddy loves him so much," he shared. Husted said he last saw Liam on the May 23, the night before going to work. RELATED: FBI, Vegas police offer $10K for information about slain boy after body found along trail "Normally, I would sleep with him and Sunday, I didn't. Normally I'm in bed, holding his hand, and I didn't. These are the types of things that I'll never get back," he said. However, Husted is taking with him the memories. He called Liam smart, energetic and mischievous. "He was amazing," he added, after taking a moment to reflect. Husted won't soon forget the moments made at La Colina Park either- his son's favorite place, Liam's "second home." "I just look in every direction and I see him," Husted said. "It's nice to be here with him."

DENVER, Colo. - A 35-year-old mother from San Jose has been arrested after the body of her 7-year-old special needs son was found in Las Vegas. An FBI task force arrested Samantha Moreno Rodriguez, 35, at a hotel in eastern Denver not far from Interstate 70, Las Vegas police Lt. Ray Spencer said on Tuesday.

Mother arrested in death of boy found near Vegas

Authorities have arrested the mother of a 7-year-old California boy whose body was found near a highway outside Las Vegas last month. Samantha Moreno Rodriguez, 35, was arrested early Tuesday at Denver-area hotel in connection with the death of her son, Liam Husted, Las Vegas police said. (jUNE 8) Subscribe...

HOUSTON (WBAP/KLIF News) – There’s more tragic news in the death of a Houston boy whose body was found in a storage unit at the Best Western Inn in Jasper, about 135 miles northeast of Houston, last week. The Harris County Institute of Forensic Sciences ruled that 5-year-old Samuel Olson...

LAS VEGAS (KTNV) -- The California woman who is accused of murdering her son and dumping his body at a trailhead near Las Vegas has been arrested in Colorado. Samantha Moreno Rodriguez, 35, was taken into custody on Tuesday morning in Denver, Colorado, by the Denver Rocky Mountain Safe Streets Task Force led by the FBI.

Teens accused of killing girl’s father in Las Vegas: “It was worth it”

A shocking cellphone video showed two teenagers talking and laughing about the death of one of their parents in Las Vegas. The girl’s father was reportedly killed, and the police are using the footage where they joke about the murder as evidence against them.

A man was extradited to Florida after being arrested and charged in connection to his girlfriend, who went missing a few weeks prior. An Orlando man, Denzelle Jordan Turner, 21, was charged with the murder of his girlfriend, 29-year-old Veronica Sacco, after her remains were found in a remote and wooded area in Florida.

'I don't think she's a bad mom, she had a time of weakness': Dad defends mom accused of murdering their autistic son, seven, and dumping his body on a Las Vegas hiking trail

A father has defended the mother accused of murdering their seven-year-old autistic son, saying he does not think she is a 'bad mom,' but instead had a 'time of weakness.'. Samantha Moreno Rodriguez, 35, was arrested in Denver, Colorado, last week and faces a murder charge in Las Vegas after her son Liam's body was found dumped on a hiking trail in Nevada last month.

2 NJ Brothers, 17 & 19, Accused of Killing a Man Whose Body Was Found in Philadelphia Woods

Two teenage brothers in New Jersey have been accused of killing a man whose body was discovered in the woods. Authorities have charged them with homicide. Authorities charged two New Jersey brothers for killing a man. In a statement, District Attorney Matt Weintraub revealed the two brothers Joshua, 17, and Anthony Gamble, 19, are being charged with conspiracy and other related crimes.

The day before hikers found missing California 7-year-old Liam Husted dead in Mountain Springs, he and his mother were staying at a Las Vegas hotel, police announced Tuesday afternoon. “We are 100 percent confident that he was killed here in Clark County,” Metropolitan Police Department homicide Lt. Ray Spencer said....

Leandra Addis' body was found on May 28, but investigators believe the crime happened on May 27 in her apartment.

Police say they have determined the identity of the person whose body parts were found in northeast Minneapolis Thursday morning, and additional parts were found once police began searching.

We see and hear about murder trials every day, but this one is a bit different as the defendant is claiming that only dismembered his father’s dead body and didn’t actually murder him. James Scandarito insisted that his father died of natural causes and that he was scared of what...

The Ocean County Prosecutor’s Office has identified the woman whose body was found in a wooded area of the Barnegat Branch Trail near Country Line Road in Waretown. According to authorities, the body of Megan Campana, 41, was found on June 4. Her last known address was in Seaside Heights.

MOBILE, Ala. (WALA)-- One day after Joanna Ryals' body was found on the side of Rangeline Road in Theodore, what caused her death remains a mystery, but her loved ones suspect something sinister. Her boyfriend, Jack Storer and her family, grew concerned Saturday morning when they couldn’t reach her. They'd...

(KADN) - A Lafayette Police spokeswoman tells News15 foul play is not suspected in the death of man whose body was found just before dawn Friday in the 200 block of Jeffery Drive. An autopsy will be conducted to determine the cause of death, but at this point it appears...

Dallas police are trying to identify a woman found dead in northeast Dallas over the weekend. Authorities on Friday released images showing sketches of tattoos that the woman had on her right leg. The drawing showed the words “Gregorio” and “Brianna” tattooed just above the woman’s ankle. Images also showed a tattoo that authorities described as a “tribal design” higher up on her right calf.