By Jon Schlosberg, Lindsey Griswold, and Anthony Rivas
Posted by
WDBO
14 days ago 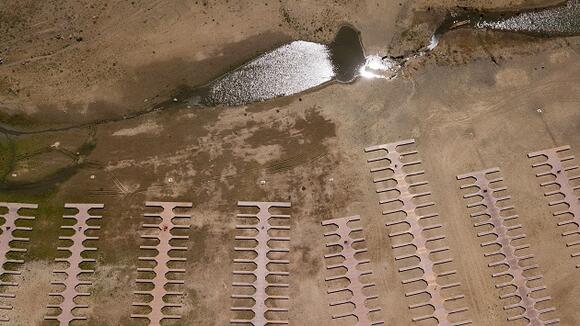 FOLSOM LAKE, Calif. — Folsom Lake, one of California's largest reservoirs, is crucial to providing water to the state's 40 million-plus residents.

But this year, relentless heat and dry conditions have evaporated the already below-average snowpack on the nearby Sierra Nevada Mountains that supply the reservoir, bringing the lake's water levels to previously unseen lows.

Speaking to ABC News' Zohreen Shah on what should be the lake's floor, Rich Preston-Lemay, the sector superintendent for Folsom Lake Park, said that under normal conditions, where they were standing would be 70 feet underwater.

"The water that we're on right now is used for a variety of things, from drinking water for some of the local municipalities [to] ... downstream on the American River for the fisheries habitat, and then for other water consumers downstream for farming, agricultural purposes," said Preston-Lemay, who's overseen the lake for nearly 20 years.

Worsening drought is currently affecting all of California, threatening cascading issues from farmers' yields to the state's hydroelectric power plants, which could then cause rolling blackouts statewide and wildfires that displace entire communities.

California Natural Resources Secretary Wade Crowfoot said the drought is caused by climate change, and that it's no longer a phenomenon they are solely trying to preempt.

"We recognize that we are in a race against time to protect our communities and our natural places from the effects of climate change," he said.

"Climate change impacts have become a matter of protecting communities in California -- worsening wildfire risk, worsening drought, extreme heat," he continued. "We used to think about preparing for climate change impacts as sort of a future planning exercise for coming decades. Now, we're actually responding to it as the public safety imperative."

Crowfoot spoke to ABC News last year after an exchange at a briefing near Sacramento between him and former President Donald Trump about the effects of climate change on the raging wildfires that spread throughout the state.

"We want to work with you to really recognize the changing climate and what it means to our forests, and actually work together with that science," Crowfoot told Trump, who has expressed skepticism about climate change. "That science is gonna be key because if we ignore that science and sort of put our head in the sand and think it's all about vegetation management, we're not going to succeed together protecting Californians."

"We do have to take action," he said. "We cannot stick our heads in the sand. We have to be driven by science and facts, and actually make the investments and make the decisions we need to both reduce carbon pollution and combat climate change, and also protect our communities in the meantime."

Crowfoot said the state is currently in its second drought season this year. If it continues, he expects the state to take drastic measures like it did in 2015, when it recommended several water-saving measures, like asking people to refrain from flushing their toilets as often.

"If this drought … lasts into a third dry winter, those types of restrictions would certainly be possible, if not expected," he said.

Just this week, Santa Clara County, one of the state's largest, announced that it would restrict water use and that people could face fines for overuse.

California's wine industry, meanwhile, has been suffering from the persistent water shortages. The environmental issues have forced them to adapt. Susan Tipton, winemaker and owner of Acquiesce Winery, said they've already been preparing after her harvest dropped by 25% last season.

"It's a worry," she said. "I wonder if my granddaughter will be able to walk through this vineyard one day and make wine from it."

She said she recently donated a portion of her 18 acres of land to the University of California, Davis so that researchers could study which grapes thrive the most in the changing weather conditions.

To preserve the art of making wine, she said many of the local farmers have placed a tax on themselves, hoping to use the money in part to meet each month with climate scientists.

"It's disturbing," she said. "But I think you have to put a spin on it to think long term and what you can do."

San Francisco to require vaccinations for all city employees

SAN FRANCISCO — (AP) — San Francisco city workers will be required to be vaccinated against the coronavirus when a vaccine receives full federal approval. The policy covering 35,000 municipal workers may be the first by any city or county in the U.S., the San Francisco Chronicle reported Wednesday. Employees...

Holy cow, not again! More bovines get loose in a US town

HUNTINGTON, W.Va. — (AP) — The revenge of the cows heated up Thursday with yet another instance of a herd getting loose in a U.S. community. This time a cattle-hauling truck rolled over along Interstate 64 in West Virginia, and an emergency dispatcher in Cabell County said a bridge connecting Huntington to Lawrence County, Ohio, also had to be shut down temporarily.

SPOKANE, Wash. — (AP) — Record-high heat is forecast in the normally mild-weathered Pacific Northwest this weekend, raising concerns about wildfires and the health of people in a region where many people don't have air conditioning. City officials in Seattle were opening libraries as cooling centers and crews were being...

PICO RIVERA, Calif. — (AP) — Songwriter Diane Warren stepped in Thursday to save the life of cow that eluded capture for more than a day after a herd escaped from a Southern California slaughterhouse and stampeded through a suburb, a city official said. The Grammy-winning artist contacted the city...

HAMIL.TON, Mont. — (AP) — A western Montana couple were able to save a horse from drowning in the Bitterroot River on Father's Day, and may have made a new friend in the process. Matthew and Christina Eickholt of Hamilton were floating down the river on Sunday with Matthew's parents...