By Erin Snodgrass
Posted by
Business Insider
10 days ago 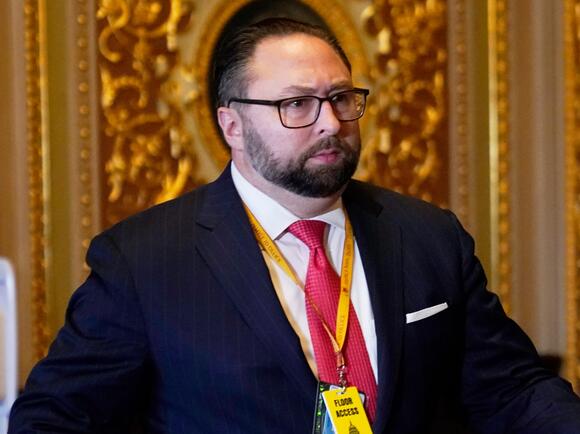 Jason Miller, a longtime senior advisor to former President Donald Trump, is leaving his role as chief spokesperson to lead a tech start-up company, according to a person familiar with the venture.

Miller, who worked on Trump's 2016 and 2020 campaigns, has served as the former president's on-the-record spokesperson since he left office in January. Miller is expected to remain with Trump's team, though not in a day-to-day position.

It was not immediately clear which company Miller would be leading, but a source said it is one that currently owns a social media platform that Trump is considering using. The former president was banned from major social media outlets, including Facebook and Twitter, following the January 6 Capitol attack.

A source familiar with the plans told Insider the startup is using "next-generation" technology and "blows away anything else currently on the market."

In recent days, Miller has had conversations with leading conservative figures about the new project, Politico reported, and additional hires could be announced soon.

The move comes as members of the right continue their search for a new social media platform in the wake of Trump being barred from many social media spaces.

Read the original article on Business Insider
View All 60 Comments

Schumer unloads on GOP over elections bill: 'How despicable of a man is Donald Trump?'

Senate Majority Leader Charles Schumer (D-N.Y.) on Monday stepped up efforts to squeeze Republicans ahead of a key test vote on a sweeping election reform bill, railing against new voting rules in GOP-led states and former President Trump ’s efforts to cast doubt on the election. Schumer, speaking from the...

Former President Donald Trump early on in the Covid-19 pandemic floated the idea of sending infected American tourists to the Guantanamo Bay Naval Base in Cuba, according to an excerpt of an upcoming book which adds new detail to the behind-the-scenes chaos of the Trump administration’s controversial pandemic response. Key...

Federal Election Commission filings show that the six-figure sum was paid in May to Trump's Mar-a-Lago, a month after the April donor event. The payment is just the latest from Republican officials to a venue owned by the former president. Walter Shaub, the former director of the Office of Government...

Trump, Biden and COVID. Welcome to your newsletter

Good morning. We hope you had a great weekend and are ready to read some great editorial content.

Watch out Donald Trump. Ron DeSantis is on the rise.

It’s widely assumed that the 2024 Republican presidential nomination is Donald Trump’s if he wants it. That may be, but Florida Gov. Ron DeSantis’s rapid rise calls that into question. DeSantis is quickly becoming the first choice among conservatives willing to look beyond Trump. He has impeccable pro-Trump credentials, winning...

The Republican National Committee spent more than $175,000 at Mar-a-Lago on May 12 for a venue rental and catering, according to a financial disclosure filed on Sunday. Donald Trump retained a 100% interest in his private Palm Beach resort when he became president. The RNC now has spent at least...

'Traitors': Rep. Moulton Calls for Greene, Gaetz and Gosar to Be Ousted Over FBI-Riot Theory

Democratic Rep. Seth Moulton of Massachusetts on Sunday called for Republicans who pushed the false flag FBI-Capitol riot conspiracy theory to be ousted from office. On Monday, right-wing website Revolver News published a new conspiracy theory that the FBI organized the deadly Capitol riot on January 6. Tucker Carlson picked up the theory on Fox News one day later, prompting some GOP lawmakers—including Reps. Matt Gaetz of Florida, Marjorie Taylor Greene of Georgia and Paul Gosar of Arizona—to promote the theory throughout the week.

Newsmax has hired former President Trump ’s campaign's legal adviser Jenna Ellis and former Trump campaign spokesperson and deputy White House press secretary Hogan Gidley as contributors, the network announced Monday. Ellis will comment on the 2022 and 2024 elections from a legal and faith-based standpoint, according to the announcement,...

The White House on Monday opened the door to revisiting the filibuster — a hotly contested issue across political lines — setting the stage for a bitter congressional fight to do away with the controversial debate tactic. Responding to a question about Tuesday's Senate debate on voting rights legislation, White...

Lauren Boebert to meet with Trump next month

Montana Senate race brings out both Trump and ‘The Dude’

BILLINGS, Mont. (AP) — Montana Senate candidate Matt Rosendale may not be a household name, but he’s surrounded on the campaign trail by President Donald Trump and other big-name Republicans like Vice President Mike Pence, Sens. Lindsey Graham and Rand Paul. His opponent, Democratic Sen. Jon Tester? He’s got “The...

Donald Trump wanted to send Americans who had Covid to Guantanamo Bay to stop them spreading the disease across the United States, a new book has claimed. In the early stages of the pandemic, it is alleged that Mr Trump suggested that Americans infected abroad should not be brought back home for care, but should instead be isolated at the military base in Cuba.

Maxine Waters: Trump, campaign should be investigated for any Jan. 6 role

Rep. Maxine Waters (D-Calif.) is demanding former President Trump and his 2020 campaign be investigated for any role in the Jan. 6 rioting by his supporters at the U.S. Capitol. In a subsequent tweet, the progressive lawmaker urged her followers to "take a look at all of the people listed...

Andy Slavitt, former senior adviser to President Biden's White House pandemic response team, discusses his new book, Preventable, about the U.S. government's response to the COVID-19 pandemic. LULU GARCIA-NAVARRO, HOST:. There are parties again and concerts. The bleachers at the ballpark are full. America is moving past the pandemic that's...

Former White House chief of staff Mark Meadows thinks the public can add Florida Gov. Ron DeSantis to the list of Republican presidential hopefuls who won't run against former President Donald Trump in 2024 should he enter the race.

Outgoing North Carolina GOP Sen. Richard Burr disagrees with former President Donald Trump about who should succeed him in 2022. The senator has backed the Tar Heel State’s former Gov. Pat McCrory, whom he has declared to be “the only one in the race that can win the general election,” according to Politico. However, two weeks ago, Trump endorsed Rep. Ted Budd, who is also running.

(CNN) — Wisconsin Sen. Ron Johnson has been an outlier in his swing state for much of the last several years. While the state has been closely contested -- Joe Biden narrowly beat Donald Trump in the Badger State in 2020 -- Johnson has carved out space as one of Trump's most ardent backers and one of the Republicans most willing to embrace wild conspiracy theories about the 2020 election and the January 6 riot that followed.

Garland tries to untangle the Trump legacy at the Justice Department

Three months into his new job, judge-turned-attorney general Merrick Garland, who inherited a demoralized and politicized Justice Department, is facing criticism from some Democrats that he is not doing enough to quickly expunge Trump-era policies and practices. On a host of issues ranging from leak investigations to civil and criminal...