Packers fans 'excited' to see Lambeau back at full capacity 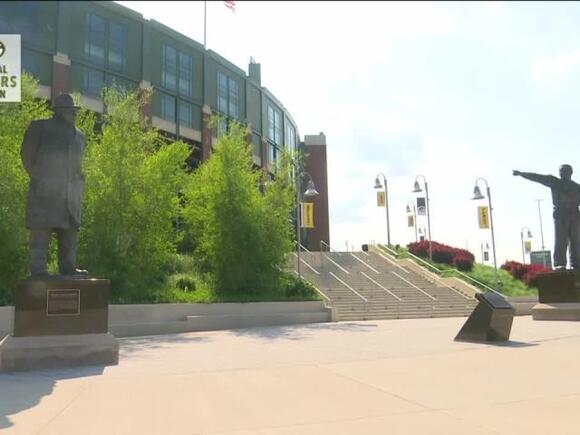 Packers fans from across the country are excited that Lambeau Field will return to full capacity this season.

The Green Bay Packers announced plans Thursday to fully open the stadium for games and events, including the Annual Meeting of Shareholders, Packers 5K Run/Walk and Packers Family Night.

“I think it’s about time. I think we’re about ready to open up," said Mike Sanborn, Madison.

Sanborn grew up in Green Bay. He said he went to games "all the time" as a kid and even worked at some of the games with his grandpa, running video stills to the coaches.

"I’m excited to see a full crowd cheering on the Packers this year and hopefully Aaron Rodgers," Sanborn said. "We’ll see what happens."

Karla Frank and her family traveled from St. Louis, Missouri Thursday to visit Lambeau Field. She said she's been to several home games and looks forward to her kids experiencing the stadium atmosphere this year.

“It’s exciting. Living in St. Louis, and being able to travel here and go to the game with all of the fans again - that’s most of the experience at Lambeau Field," Frank said.

"I'm really excited and I hope we get to see Aaron Rodgers," added Logan Frank, who visited Lambeau with Karla Thursday.

Bob Spencer and his wife spent time at Lambeau Field Thursday while on their honey moon. The couple currently lives in Michigan.

Spencer grew up as a fan of the green and gold and said he's happy Lambeau is opening back up.

“They should be full capacity. Everybody’s either had the shot or they’ve had the illness. If they’re afraid to go around people they can wear their mask if they want. If they don’t, give their tickets to somebody that’s going to enjoy the game," Spencer said.

The Atrium is also back to its regular hours. This includes the Packers Pro Shop, Packers Hall of Fame and Classic Stadium Tours.

Aaron Rodgers has 3-word answer about playing for Packers

Will Aaron Rodgers be playing for the Green Bay Packers this season despite all the holdout drama? He was asked that question on Tuesday and gave a 3-word response. Rodgers was part of a foursome competing in a televised golf match called “The Match” on Tuesday. He was asked by announcer Brian Anderson whether he will be quarterbacking the Packers in Week 1 this season.

Now that the drama between Aaron Rodgers and the Green Bay Packers appears to be over, the Packers are moving on from another quarterback on the roster. According to multiple reports, the Packers will be releasing Blake Bortles:. Originally drafted by Jacksonville in 2014, Bortles has appeared in 78 career...

Kansas City Chiefs WR Tyreek Hill is back at it, racing fellow NFL stars to determine who the fastest player in the league is. This time he challenged Green Bay Packers RB Aaron Jones to a race at what appears to be a youth football camp. Hill took to Twitter...

The New England Patriots struggled to get consistent production at quarterback during the 2020 season leading to one of the worst outcomes of the Bill Belichick era. However, the franchise addressed the position at this year’s NFL Draft by selecting Alabama breakout Mac Jones in the first round. Although there’s...

Here is how much money Aaron Rodgers reportedly wants from Packers

The issues Aaron Rodgers has with the Green Bay Packers are supposedly not about money, but that does not necessarily mean money can’t fix them. A recent report claimed Rodgers turned down a multi-year contract extension from the Packers this offseason that would have made him the highest-paid player in football. Of course, all that matters with NFL contracts is guaranteed money, and there were no details about the structure of the supposed offer.

Randall Cobb is happy to be back with the Green Bay Packers. Very, very happy. The team traded a reported sixth-round pick to the Houston Texans to land Cobb, per ESPN's Rob Demovsky, and the veteran wide receiver told reporters he was relieved to be back on a contender like Green Bay after toiling in Houston last season:

Green Bay Packers superstar quarterback Aaron Rodgers sure does love the number 69. No. For real. Aaron Rodgers-69 is now a thing. During this years training camp, offensive tackle David Bakhtiari (who happens to wear the number 69) decided to treat Rodgers with his very own Aston Martin golf cart. The cart has numerous features for the Packers QB, including a tag with the label “MVP”.

Aaron Rodgers signed a reworked contract with the Green Bay Packers, which means he only has two years left before he becomes a free agent. But will he stay with the Packers until then? Packers legendary safety LeRoy Butler recently spoke to TMZ and revealed when Rodgers will leave the Packers.

The Green Bay Packers are all in on the 2021 season, acquiring wide receiver Randall Cobb just to keep Aaron Rodgers happy this fall. FS1 TV/radio host Colin Cowherd made his stance on this recent trade very clear this Wednesday. Cowherd believes this was a mistake by Green Bay. Instead...

It seems that every time the Green Bay Packers front office puts out on fire this offseason, another one pops up. With Aaron Rodgers fully back in for the 2021 season, most would assume things would calm down a bit. That’s just not going to be the case. Rodgers’ top...

It looks like Aaron Rodgers isn’t the only star the Green Bay Packers are getting good news about today. There’s been some encouraging developments involving Davante Adams as well. On Friday, NFL Network’s Ian Rapoport reported that the Packers and Adams had broken off negotiations on a possible contract extension,...

While the Green Bay Packers seem to have come to a compromise with superstar quarterback Aaron Rodgers for the 2021 season, it didn’t stop the signal caller from speaking his truths on Wednesday. It was the first time Rodgers was at a press conference since all the offseason drama started and he covered an array of topics.

Green Bay Packers Positioning Themselves to Make Another Addition

This may not be what going “all-in” looks like to some, but it’s clear — and has been for a while — that the Green Bay Packers are all-in on the 2021 season. Despite facing a shrunken salary cap this offseason, for the most part, the Packers were able to keep the 2020 roster together here in 2021. The only major loss in free agency was Corey Linsley–otherwise, just about everyone else is returning.

The entire drama surrounding Aaron Rodgers and the Green Bay Packers won’t die down anytime soon. And we’re all for it. Right?. Rodgers may have inadvertently brought himself another wild controversy after his recent comment on the release of wide receiver Jake Kumerow. The star quarterback called Kumerow the Packers’ second-best WR. In an interview with ESPN, Rodgers voiced out his absolute disgust.

Rivalries never die. Even though he hasn’t played for the Minnesota Vikings in two decades, John Randle has some thoughts on Aaron Rodgers and the Green Bay Packers. In an interview with PopCulture, Randle addressed the ongoing acrimony between Rodgers and the Packers organization. The Hall of Fame defensive lineman thinks Green Bay made one major misstep in its relationship with the MVP quarterback.

Rodgers’ issues with the front office have been compounding, dating back years now. The most glaring move that really set the wheels in motion for a potential breakup came at the 2020 NFL Draft, when the team traded up in the first round to draft quarterback Jordan Love. Rodgers wasn’t...