By Sarah Polus
Posted by
The Hill
8 days ago 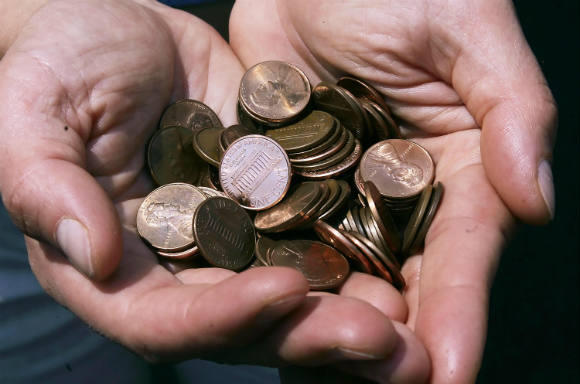 A girl and her mother have donated the $800 in pennies that her estranged father dumped on their Virginia yard for his last child support payment.

"My mom came out and was like, 'What are you dumping in my yard?'" 18-year-old Avery Sanford told WTVR. "She didn’t know who it was until he shouted, 'It’s your final child support payment.'"

Home-security footage shows the unidentified man pulling up an SUV with a trailer attached and emptying the contents of it onto the front lawn on May 21. The interaction between Sanford's mother and estranged father can also be heard.

Following the incident, the family and their friends picked up the 80,000 pennies and donated them to a local charity.

"They were able to turn such a negative experience, and what her daughter witnessed, into a positive," executive director Cathy Easter told The Washington Post. "They found a way to turn this around and not feel devastated about it."

Sanford told WVTR that her estranged father's actions were "really hurtful and damaging," but that she's glad they were able to do some good.

"Turning around and donating that money to moms and children in need, I feel like that really turns this situation into a positive," she said.

Sanford's story reportedly inspired others to help out as well, with the shelter saying they've received more than $5,000 in donations this week.

(NEXSTAR) – A Virginia teen says she and her mother are turning an upsetting moment into an opportunity to do good after her father dumped 80,000 pennies on their front lawn last month. “I just turned 18. When I was in the middle of class, my dad came by. He...

Adopting 6 Siblings Healed Widow's Grief Over Husband Killed in Crash: 'We Saved Each Other'

Bobbie-Jo Floyd was a happily married stay-at-home mom of two boys when tragedy struck. On October 19, 2014, her husband, Andre Floyd, was killed in a motorcycle crash, leaving her overwhelmed by grief. "I curled up in a ball on the floor," she says of the ensuing months. "I was...

Mom fights anti-White training in daughter’s kindergarten class: ‘They reduce everything down’ to skin color

Rhode Island mother Nicole Solas is taking action against her daughter’s school district for refusing to share information on race theory-based curriculum. Solas joined "Tucker Carlson Tonight" on Thursday to express her frustration with district management, and shared that school guidelines bar teachers from calling their students "boys and girls" and rethinks the American foundations of Thanksgiving.

A Virginia family says they were shocked when they found 80,000 pennies on their front lawn last month but the funds will be donated to a local domestic abuse center. 18-year-old Avery Sanford said her father pulled up to her mother’s home in Richmond and dumped the thousands of pennies on the front lawn as a final child support payment. She added that her mother was stunned by her ex-husband’s stunt and how it deeply affected her and her sister since their father did it to embarrass their mother. The high school senior hasn’t spoken to her father in years and called the act “damaging.”

A man has revealed he charged his ex $100 after he was forced to take time off work to "babysit" their daughter. In an anonymous post on Reddit, the man explained that he and his ex have a custody and child support agreement for their five-year-old daughter Sumara that's been in place since they broke up.

'Talk to your kids': Parents lose daughter to accidental overdose days before graduation

A mother and father are devastated after their daughter died of an accidental overdose right before her high school graduation. Allison and Jesse Deickman said their daughter, Hailey, was an honor roll student at Belle Chasse High School in Louisiana. On Tuesday night, she would have walked across the stage accepting her diploma. Instead, her parents will.

Jun 9 - Dad pays final child support payment with 80000 pennies. A Virginia man went to extreme measures to show he was not happy about paying child support. He dumped 80,000 pennies in front of his daughter’s home as his final payment. Avery Sanford, 18, took those pennies and turned his act of anger into a positive for families in need.

RICHMOND, Va. (Video above from WTVR via CNN) — A Virginia man went to extreme measures to show that he was not happy about paying child support. He dumped 80,000 pennies in front of his daughter's home as his final payment. Avery Sanford, who just turned 18, said she and...

This Mom and Daughter Turned Pennies into Something Positive!

Mom, Daughter who Received Child Support Payment in Pennies Donate it to Charity. The Virginia mother and daughter who received an $800 child support payment in pennies say they’ve donated the pile of 80,000 coins to a local charity. Avery Sanford, 18, says she and her mom collected the pennies...

HENRICO, CO., Va. (WTVR) - What started as an act of spite has triggered a domino effect of kindness. “He pulled in front of our house, like turned the trailer on so it dumped out all the pennies,” said Avery Sanford, 18, the man’s daughter. Her dad made his final...

The father of Cash Gernon — the 4-year-old boy who was kidnapped and killed in Texas — has reportedly been banned by the family from attending the funeral. Accused drug fugitive Trevor Gernon wanted to pay his respects to the boy at the upcoming funeral, the Daily Beast reported. “My...

Mother ‘forced adopted daughter, 6, to have 500 unnecessary treatments including feeding tube after faking her illness’

A MOTHER has been charged with subjecting her adopted daughter to hundreds of unnecessary medical treatments after faking her illness. According to charging documents, Sophie Hartman, 31, is alleged to have claimed her six-year-old daughter suffered from a rare neurological disease, Alternating Hemiplegia of Childhood, and made her use a wheelchair.

The family of the 4-year-old boy found dead in a Dallas street blasted his biological father’s girlfriend who had been caring for him — claiming she’s now trying to "gain financially" from the horrifying ordeal. Patty Seagroves — whose sister is Cash Gernon’s mom, Melinda — said that they were...

Daughter comes out as trans, gives dad courage to come out as well: 'We're stronger as a family'

Trigger warning: This story contains themes of bullying that some readers may find distressing. Corey Maison knew she was a girl when she was two years old, despite being assigned 'male' at birth. She wanted to transition but was afraid to tell her parents. “I wanted to make my parents proud of who I am, but I thought that they would not like me,” she said. At the time, she didn't know that one of her parents was coming to terms with his gender as well. Corey Maison eventually opened up to her parents and embraced her true self at the age of 11. Her dad, Eric, wanted to transition but was worried about how his husband and five children would react. Four years after Corey's transition, Eric drew courage from Corey's transition to make his own in 2016. They've now become a pillar of strength for each other. Corey Maison and her father both say their transitions have brought the family closer. "We're stronger as a family," said Eric.

Widow Overcomes Grief for Her Late Husband by Adopting 6 Children

A widow who lost her husband in a crash adopted six children that helped heal her grief. She claimed her late husband had played a key role in bringing the children into her life. When tragedy struck Bobbie-Jo Floyd, she was a happily married mother of two boys. On October...

An 18-year-old said her father was 'trying to embarrass' her family when he dumped 80,000 pennies on their yard for his final child support payment

An 18-year old Virginia teen said her father put 80,000 pennies on her family's front yard. Avery Sanford told WTVR that her father said the pennies was his "final child support payment." Sanford and her mother donated $800 to a domestic abuse organization. Visit Insider's homepage for more stories. A...

Losing a loved one is devastating in ways both big and small. For a child who's lost a parent, food can be a difficult reminder of the person who's gone, and making beloved foods can be a valuable connection to them. One dad took to Reddit to ask for advice...

Virginia dad pours 80k pennies as his daughter’s support payment into her lawn, she responds with kindness

A Virginia dad dumped 80,000 pennies on his ex-wife’s lawn for his final child support payment. Avery Sanford, who just turn 18, is one of the man’s estranged daughters. She has not spoken to her dad for years. “It’s not just my mom he’s trying to embarrass, it’s also me...

An Oregon woman died homeless, unaware she was entitled to over $800,000 in inheritance.Catherine Boone died in January 2020 aged 49 with no idea that she had been left $884,407. As detailed by her father, she had faced mental health and drug problems throughout her life and could not be contacted about the money despite numerous attempts to reach her. “It just didn’t make sense to me that money was just sitting there.” Jack Spithill, her father told KGW News. “She had a rough life but when she was good, she was really good,” he continued. “I attribute it almost...