By Charles Davis
Posted by
Business Insider
12 days ago 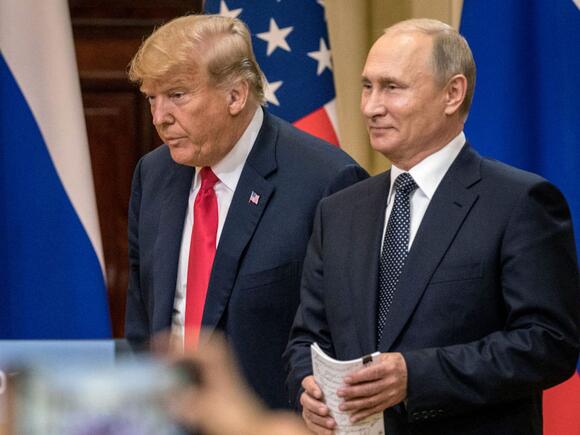 Former President Donald Trump again denied the fact that the Russian government interfered in the 2016 election to aid his campaign, saying he trusts Vladimir Putin more than the US intelligence community.

In a statement, the ex-president complained about the investigation into Russian election interference, which was confirmed by not just by US intelligence agencies, but by foreign allies and a Republican-led Senate Intelligence Committee.

The comments come as President Joe Biden is set to meet his Russian counterpart .

In the statement, the loser of the 2020 election asked his Democratic successor to give Putin "my warmest regards."

Read the original article on Business Insider
View All 82 Comments

As World Set to Condemn U.S. at U.N., Cuba Calls Embargo 'An Act of War'

On the eve of a United Nations General Assembly vote in which the vast majority of the international community was likely set to condemn the United States for its ongoing economic embargo against Cuba, the communist-led island's envoy to the U.N. has likened the trade chokehold to an act of war.

• Putin wrote the Ukrainian tragedy was a result of post-Cold War dynamics, which left countries faced with an artificial choice between siding with the West or Russia. The United States along with its European allies had orchestrated the infamous 2014 coup that forced Ukranian President Viktor Yanukovich to resign, this is what the Russian President Vladimir Putin is saying.

Majority of voters say Biden made progress in summit with Putin: poll

A majority of voters in a new poll say President Biden made at least some progress during his summit this month with Russian President Vladimir Putin . Twenty-one percent of registered voters in a new Harvard CAPS-Harris Poll survey released exclusively to The Hill said that Biden made “meaningful” progress in the Geneva meeting, while another 31 percent said he made “some” progress.

Where another Trump presidency could take America

(CNN) — "It's a fragile time for our democracy," said US Rep. Eric Swalwell, disclosing earlier this month that the Department of Justice had secretly seized his communications records in 2017, when he was on a congressional committee investigating then-president Donald Trump's ties to Russia. Rep. Adam Schiff, also on...

Eric Trump has claimed President Joe Biden's "incompetence" is making his father's decision to run for the presidency in 2024 easier. In an appearance on conservative news network Newsmax, Eric Trump Trump suggested former president Donald Trump would easily defeat Biden in the next presidential election. "What's the latest on...

A group of GOP senators tore into President Biden's national security adviser after he called Nord Stream 2 AG, the company at the center of Russia’s in-construction natural gas pipeline, a "Swiss company." Members of the Senate Committee on Foreign Relations, blasted National Security Adviser Jake Sullivan for his Sunday...

WASHINGTON, June 22 (Reuters) - Former U.S. President Donald Trump may have an unlikely ally to defend him against lawsuits alleging he incited the U.S. Capitol insurrection: President Joe Biden’s Justice Department. The Biden administration paved the way for that possibility, say constitutional scholars and lawyers in the cases, by...

The Global Times, a Chinese state run outlet, railed against the United States on Tuesday, warning America that it's overestimating its strength and should tread lightly if it doesn't want to face attacks from both China and Russia. China and Russia have grown closer as their relationships with the United...

What Biden and Putin didn't discuss

At his summit with Vladimir Putin in Geneva, Switzerland last week, President Biden pressed his Russian counterpart on a number of critical issues. He stressed the importance of protecting U.S. infrastructure from Russian cyberattacks — and signaled that the White House was prepared to take retaliatory measures in response to continued Russian cyber-mischief. He emphasized his support for Radio Free Europe/Radio Liberty, the U.S. broadcaster whose continued functioning and independence within Russia is now being threatened by the Kremlin. And he warned of “devastating consequences” for Russia if opposition critic Alexei Navalny, now languishing in a penal colony on questionable charges, ends up perishing behind bars.

Russian ambassador to US arrives in Washington

The Russian Ambassador to the US, Anatoly Antonov, returned to Washington, DC after spending almost three months in Moscow, the Russian embassy tweeted Sunday, after US President Joe Biden and Russian President Vladimir Putin agreed to send both their ambassadors back to their posts during their meeting in Geneva last week.

Things are about to get much harder for Biden and Democrats

In 2020, voters elected Joe Biden primarily because he was not Donald Trump. But Democrats’ constrained expectations had expanded over the course of the campaign; rather than looking like a caretaker whose primary purpose was to excise the Trump tumor, Biden displayed a surprising degree of policy ambition. Their hopes for the Biden presidency began to rise.

Tehran — Iran's president-elect Ebrahim Raisi has wasted no time in setting out his hardline agenda. Raisi said on Monday that he would not meet with President Joe Biden even if the opportunity arose. At an inaugural press conference, Iran's new political leader said Washington should immediately return to the...

Pompeo: Biden's national security adviser was right about one aspect of Putin meeting

Former Secretary of State Mike Pompeo joined "The Story" on Monday to share that National Security Adviser Jacob Sullivan was right about what he considered a major aspect to the Geneva, Switzerland summit between President Joe Biden and Russian leader Vladimir Putin. Sullivan, a former senior adviser to Hillary Clinton,...

Iran's president-elect said Monday he wouldn't meet with President Joe Biden nor negotiate over Tehran's ballistic missile program and its support of regional militias, sticking to a hardline position following his landslide victory in last week's election. Judiciary chief Ebrahim Raisi also described himself as a "defender of human rights"...

National Security Adviser Jake Sullivan told CNN's "State of the Union" on Sunday that the Biden administration is preparing another round of sanctions against Russia over the poisoning of opposition leader Alexei Navalny. Why it matters: The news of a potential new sanctions package comes days after President Biden warned...

Former Israeli Prime Minister Benjamin Netanyahu has called the new government that succeeded his administration a threat to the country's national security because it has promised to inform the United States before acting against Iran. Last Thursday, Israeli Alternate Prime Minister and Foreign Minister Yair Lapid held his second phone...

National Security Adviser Jake Sullivan on Sunday said the Biden administration is preparing a third round of sanctions for Russia over the poisoning of opposition leader Alexei Navalny following Joe Biden's first face-to-face meeting as president with Vladimir Putin. "We are preparing another package of sanctions to apply in this...

Why is Biden following in Trump's footsteps on Cuba?

(CNN) — The United States will experience a diplomatic defeat at the United Nations on June 23, yet again. Every year since 1992, except in 2020 because of the global pandemic, Cuba has presented a resolution against the US embargo, which the island has endured for almost 60 years now. Only two countries have regularly voted against the resolution: the US and Israel -- with Brazil joining them in 2019. In 2016, under President Barack Obama's policy of engagement with Cuba, the US and Israel abstained from voting against the embargo. That year the island had its most flamboyant victory, with 191 countries condemning the US economic embargo.