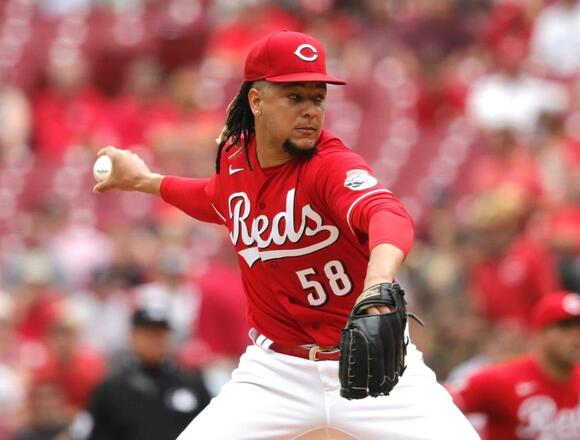 Cincinnati native Brent Suter (7-3) pitched two innings of relief of Freddy Peralta to earn his second win of the season against his hometown team. Brad Boxberger, Hoby Milner and Trevor Richards closed out the game for Milwaukee, which returned to its winning ways one day after a five-game win streak came to an end.

The win was Milwaukee’s 14th in 18 games and helped the Brewers tie the idle Chicago Cubs atop the NL Central.

For the second straight day Luis Urias was hit by a pitch to open the game, this time against Reds starter Luis Castillo. After a one-out walk, Avisail Garcia’s hot smash past Joey Votto at first plated Urias from second for a 1-0 Milwaukee lead.

Votto opened the second inning for Cincinnati with his 301st career homer and first hit since returning from the injured list on Tuesday. The 400-foot towering homer landed several rows deep in the right field stands and tied the game, 1-1.

Heavy rains came in the fourth inning and the teams continued to play. Castillo (2-9) retired 11 straight before the eventual 37-minute rain delay.

Brewers manager Craig Counsell pulled Peralta for Suter to start the fifth. Peralta yielded only the Votto homer and a double to Nick Castellanos in four innings of one-run work. Facing Suter, Jesse Winker delivered a two-out single to left to put the Reds ahead, 2-1.

Castillo struck out Urias to open the sixth to set down his 15th straight batter before running into trouble. He issued back-to-back one-out walks to Vogelbach and Christian Yelich. After a strikeout of Garcia for the second out, Reds manager David Bell pulled Castillo for Lucas Sims, who immediately allowed a game-tying ground-rule double to Willy Adames. Peterson’s bloop single in front of Winker in left scored two and the Brewers led, 4-2. 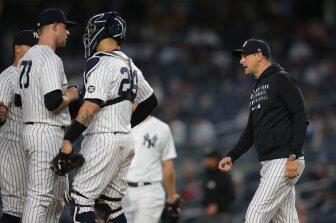 Vogelbach drilled a two-run shot to right-center off lefty Sean Doolittle that put Milwaukee ahead 6-2 in the seventh. Peterson’s RBI double in the eighth off Art Warren made it 7-2.

With the MLB trade deadline less than 48 hours away, the first-place Milwaukee Brewers have struck gold in a blockbuster

Call it whatever you want; disgusting, classless, nauseating, or off-putting. But whatever you call, it should most definitely result in a multiple-game suspension for Javier Baez. The Chicago Cubs’ infielder’s on-field “celebration” following a walk-off single versus the Cincinnati Reds was one of the more objectionable displays I’ve ever seen in baseball.

The MLB trade deadline is now just a few days away, and the Milwaukee Brewers sit with a comfortable lead in the NL Central, up 6.5 games on the second-place Cincinnati Reds. However, just as Ken Rosenthal of The Athletic told us after the Crew traded for Rowdy Tellez a few weeks ago, don’t expect them to be done making moves just yet.

Reds: 4 difficult transactions Cincinnati must make in the coming days

In the coming days and weeks, the Cincinnati Reds will look much different. Mike Moustakas, Nick Senzel, and Lucas Sims all began a rehab assignment this past Friday, and Tejay Antone won’t be far behind. Nick Castellanos is currently rehabbing from a microfracture in his wrist, but once he’s on the mend, expect Cincinnati’s top bat back in the lineup.

(METRO/LEARFIELD) – The Brewers opened up the second half of the season with a series sweep against the Reds in Cincinnati. They blanked the Reds 8-0 on Sunday with Willy Adames, Jackie Bradley Jr. and Tyrone Taylor each posting two-RBI games. Corbin Burnes earned the win after tossing eight-and-a-third scoreless...

MILWAUKEE (AP) — Ryan O’Hearn and Jorge Soler homered as the Kansas City Royals beat the Milwaukee Brewers 5-2 Tuesday in a game that began early to give local fans a chance to watch their team in the NBA Finals. The start time was moved up four hours at American...

Thanks to monster home runs from Ryan O’Hearn and Jorge Soler and a solid start from Mike Minor, the Kansas City Royals defeated the Milwaukee Brewers 5-2. Minor talked with the media following the game Tuesday, July 20, 2021.

MILWAUKEE (AP) — Ryan O’Hearn and Jorge Soler homered as the Kansas City Royals beat the Milwaukee Brewers 5-2 in a game that began early to give local fans a chance to watch their team in the NBA Finals. The start time was moved up four hours at American Family...

India went 3-for-4 with a walk, a double, two home runs, three runs scored and three RBI in Friday's 6-2 win over the Mets. The rookie put together the best performance of his brief career, leading off the game with a solo shot and then capping the scoring for the Reds with a two-run blast off Anthony Banda in the ninth inning. In 14 games since the All-Star break, India is slashing .309/.433/.582 with four of his 10 homers on the year.

A trio of Cincinnati Reds returned to the diamond on Friday night for the Louisville Bats. Nick Senzel, Mike Moustakas, and Lucas Sims were all in action. The game was cut short due to weather, and the plan is to pick up where things left off in the top of the fifth inning. However, we saw good results from all three players.

The Milwaukee Brewers will play the second game of their three-game series against the Pittsburgh Pirates in PNC Park Pittsburgh, PA, on Wednesday, July 28, 2021, at 7:05 PM (EDT). The Brewers are 58-42 after a 3-1 defeat to the Chicago White Sox on Sunday, and they have Monday off before starting their series with the Pittsburgh Pirates. Milwaukee takes the leading position in the National League Central by seven matches over the Cincinnati Reds, who are in second place.

MILWAUKEE — Ryan O’Hearn and Jorge Soler homered as the Kansas City Royals beat the Milwaukee Brewers 5-2 Tuesday in a game that began early to give local fans a chance to watch their team in the NBA Finals. The start time was moved up four hours at American Family...

Series Wrap: What we learned about the Cincinnati Reds as they were swept by Brewers

After seven consecutive games against the first-place Milwaukee Brewers, the Cincinnati Reds are essentially in the same place they started. The Brewers picked up a game in the National League Central race, winning four of the seven games in the two series. The Reds’ playoff odds took a big hit when they were swept by the Brewers over the weekend:

Welcome to Wisconsin, friends! Be sure to hit up the Jelly Belly Factory and the Mars Cheese Castle this weekend, one of which is disappointingly not made of cheese (up to you to pick the disappointment). Hopefully our manager is up on the differences between the AL and NL, so let’s get to it.

This is a very good Milwaukee Brewers team, but one of the areas that President of Baseball Operations David Stearns has had to address is the first base position. Keston Hiura has continued to struggle at the plate for much of the season and is now in Triple-A. While Daniel Vogelbach found some power before ending up on the IL, but he is still a limited player with a .709 OPS this season.