By Mike Fisher
Posted by
CowboyMaven
9 days ago 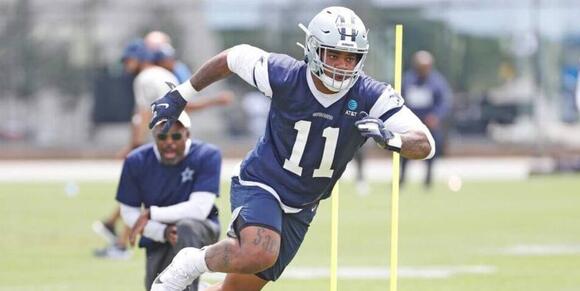 FRISCO - It is only fitting that rookie linebacker Micah Parsons served as a standout of this week's minicamp practices at The Star. For one thing, as the team's first-round NFL Draft pick, his sheer talents should provide him a showcase.

And for another? This coaching staff seems intent on finding ways to help him achieve a goal:

“Just creating havoc,” Parsons said. "Creating disruption, being able to create that excitement, momentum change, a chance to get the ball out and get it back to our explosive offense.”

Parsons was specifically talking about being able to line up as a defensive end, as the DPR (designated pass-rusher), and there were some spectacular moments there. He got a pass defensed in 7-on-7 work by knocking away one throw. Later, Parsons rushed off the right edge and so over-matched tackle Ty Nsekhe that the big man got twisted up and had to temporarily limp off the field.

That play would've been a sack. Havoc.

Said Parsons: “I was able to come free, use my speed to come off the edge and do what I do best. I would say it’s just another play and another down.”

But for this particular defense, among the NFL's poorest last year? This sort of explosive promise is not just "another down.'' It has a chance to be something special - something Cowboys defensive end DeMarcus Lawrence noticed on film.

"Yeah,'' Parsons responded. "I used to be a defensive end.”

This doesn't mean Lawrence "discovered'' this talent in Parsons; the Cowboys were already aware of the Penn State product's multiple skill set. But it does mean Lawrence is now spending extra time teaching the kid some of his moves.

If this works the way Dallas plans it, the 6-3, 245-pound Parsons will start at middle linebacker (flanked by Leighton Vander Esch at WILL, with Jaylon Smith in a lesser SAM role) and will work as a run-stuffer, as a speedster who drops into coverage (he has fun this week chasing around the "untouchable'' Ezekiel Elliott), and yes, maybe as a chess-piece pass-rusher in new coordinator Dan Quinn’s defensive scheme.

Cowboys news: Micah Parsons showing off his skills at OTAs

Micah Parsons’ Confidence Growing At OTAs - David Helman, DallasCowboys.com. The Cowboys need Parsons to help re-boot a bad defense. During Thursday’s OTA, Parsons made several of the best plays of the afternoon, including a pick-six of Ben DiNucci during seven-on-seven drills and an A-gap blitz that resulted in a sack of Garrett Gilbert during the team session.

FRISCO - Dallas Cowboys rookie Micah Parsons is apologizing for a social media post that some found disrespectful of the 9/11 terrorist attacks. “Man, people are sick,” Parsons wrote Thursday on Twitter. “I would never disrespect my country in any (way)! … If you took any offense I apologize to all and to all those involved.”

DALLAS (105.3 The Fan) - The Dallas Cowboys have come to an agreement with first-round pick Micah Parsons, Ian Rapoport of NFL Network reported Wednesday. Terms of the deal for the rookie linebacker have not been announced yet, but Parsons will get a fully-guaranteed four-year deal.

Dallas Cowboys star wideout Amari Cooper taught linebacker Micah Parsons the hard way that the rookie should start lower on the ladder in the chess game, something that Cooper plays quite competitively.

FRISCO, Texas – First-round draft pick Micah Parsons has officially signed his rookie contract with the Cowboys. Parsons, the 11th overall pick in April's NFL Draft, has been impressive in organized team activities and this week's minicamp, which concludes Thursday. The rookie linebacker has made plays in these non-padded practices while also flashing ability as a pass rusher.

The Cowboys’ offseason workouts continued on Tuesday with the opening of the team’s mandatory minicamp. Most players are present in Frisco. Head coach Mike McCarthy said Tuesday the only players he expected to not participate were those that are currently sidelined with medical issues. Here are some highlights from our...

Micah Parsons is trying to move fast while taking it slow, all the while mindful of a goal:. “The trifecta,” the Dallas Cowboys rookie linebacker calls it. "It's one thing to cover, and one thing to tackle,” he said during this week’s OTAs at The Star, “but if you can do the trifecta and do all three – cover, tackle and blitz and get pressure – then that's what makes you a good ballplayer.”

Former Penn State linebacker Micah Parsons has already experienced the thrill of being a first-round draft pick. Now the next major milestone has been achieved. On Wednesday, Parsons signed his rookie contract with Dallas Cowboys. Details on the contract have yet to be released at this time, although the early...

Micah Parsons reveals how comfortable he is in Cowboys system

Dallas Cowboys rookie linebacker Micah Parsons has raised some eyebrows so far at the team’s rookie minicamp and OTA’s. Selected No. 12 overall in the 2021 NFL Draft out of Penn State, Parsons elected to opt-out of the 2020 college football season due to the COVID-19 pandemic. In his freshman...

The Dallas Cowboys selected linebacker Micah Parsons with the No. 12 pick in this year’s NFL draft. Parsons was thought of as one of the best linebacker prospects in the draft as he brings speed and an athleticism to the position the Cowboys lacked. As good as Parsons is as...

FRISCO, Texas - Cowboys defensive end DeMarcus Lawrence asked rookie linebacker Micah Parsons during a film session: "You pass rush like that, Rook?" Parsons confirmed he did. "[Lawrence] was like, 'All right, tap in with me,' " Parsons recalled Wednesday from mandatory minicamp. "We're going to work together before (training) camp starts."

10 things we learned from Cowboys OTAs and minicamp: Dak Prescott buries injury, Micah Parsons gets work at DE and more

Cowboys minicamp and OTAs have come and gone, which means they are one step closer to training camp. While much more will be discovered in July, here are 10 things we learned from Cowboys OTAs and minicamp. 1. Dak has ‘buried’ his injury. Cowboys quarterback Dak Prescott is only eight...

The Dallas Cowboys are ramping up their offseason workouts and rookie Micah Parsons, who the team took with the No. 12 overall pick in the 2021 NFL Draft, is finding his place in the defense to help improve things in 2021. On Tuesday, Cowboys broadcast analyst Babe Laufenberg gave his first impressions on what he is seeing out of Parsons on the field.

With their 2021 first-round NFL Draft pick, the Dallas Cowboys landed one of the most solid defenders available. The team took Penn State linebacker Micah Parsons with the No. 12 overall pick. The Cowboys have reached a deal with the star rookie. His four year, fully guaranteed deal is worth...

According to a report from Ian Rapoport, the New England Patriots have signed free agent WR Marvin Hall. Hall, of course, spent time with the Detroit Lions and showed some flashes of brilliance, especially when trying to stretch the field with his speed.

Why Devonta Smith, Landon Dickerson won't be like past Eagles' disappointing draft picks

DeVonta Smith has not taken a single hit from a defender yet, so it's too soon to tell if his 166-pound frame can take the pounding from NFL players weighing dozens of pounds more than him. Landon Dickerson has yet to be cleared from ACL surgery, and he's stuck behind...

Tim Tebow has a long way to go. While he did have an impressive catch-and-run during Monday's minicamp session, the former Broncos and Jets quarterback and Heisman Trophy winner has his work cut out for him if he is going to make the Jaguars' 53-man roster as a tight end. CBS Sports senior NFL writer Pete Prisco, who has covered the Jaguars since their inaugural season, took in Tebow's first minicamp practice in nearly a decade.

With the conclusion of the 2021 NFL Draft, most starting quarterbacks are in place. Except maybe Aaron Rodgers. In 2020,

The 2021 NFL Draft is in the books and training camp is right around the corner for the Detroit Lions. According to the experts, the Lions will end up with one of the worst records in the league in 2021, which means they will have a high draft pick in the 2022 NFL Draft.