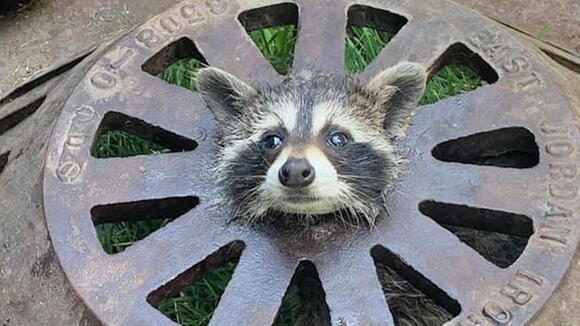 HARRISON TOWNSHIP, Mich. — Animals have been known to wiggle into some small places, but one baby raccoon found itself in a tight spot Tuesday.

Firefighters in suburban Detroit were called to rescue a raccoon with its head stuck in a sewer cover, MLive reported.

Harrison Township Firefighters Local 1737 wrote about the Tuesday rescue on Facebook, noting that multiple tools were used to free the animal.

Lt. Brian Lorkowski of the Harrison Township Fire Department said that after receiving a call from animal control, the firefighters considered trying to cut the raccoon free. However, they realized that was not a promising option.

“We didn’t want to put a saw too close because it could heat up the cast iron and injure the animal, and we didn’t want to nick it with a saw,” Lorkowski told MLive. “We were trying all different kinds of options to not try and hurt it, but it was stuck in there really good.”

The firefighters tried some household items but failed, and the animal was not keen to cooperate.

“We first put dish soap around its neck, but that didn’t work. We had gloves on because it was biting and scratching,” Lorkowski told MLive. “Then, a homeowner brought out cooking oil. We were able to guide it out then, but it was hard getting it out. I don’t even know how it got stuck in there to begin with.”

Once the animal was freed, officials with Macomb County Animal Control checked it for injuries, WZZM reported. There were none, and firefighters were left to talk about an unusual incident.

“I can’t remember any raccoon rescues,” Lorkowski told MLive. “I think this is my first, but we get ducks all the time that fall in the storm drains.”

BENSALEM TOWNSHIP, Pa. — Police in Pennsylvania are looking for a man who changed the barcodes while checking out of a Lowe’s store on Saturday. According to authorities in Bensalem Township, the man switched the barcode on a $400 Dyson vacuum cleaner, scanning the item at a self-checkout counter and paying only $24.99, WPVI reported.

LAUDERHILL, Florida — A Florida woman is a person of interest after police found the bodies of her two daughters nine hours apart in a canal, authorities said Wednesday. Police on Wednesday identified the two girls as Destiny Hogan, 9, and Daysha Hogan, 7, the Sun-Sentinel reported. Their mother, Tinessa Hogan, 36, of Lauderhill, is a person of interest in the case, Lauderhill Lt. Mike Bigwood confirmed to the Miami Herald.

WASHINGTON — Five people were injured Wednesday when a pedestrian bridge fell onto Interstate 295 in Washington, according to officials with D.C. Fire and EMS. Authorities said they were called just after 11:50 a.m. to reports of the bridge collapse near the intersection of Kenilworth Avenue and Polk Street NE.

'It's a family': Wreck shatters life's work at girls home

CAMP HILL, Ala. — (AP) — Caring for abused and neglected girls is Candice Gulley’s life work, and that's what she was doing when she helped load vans from an Alabama children’s home for a trip to the beach. The kids walked on the sand, ate seafood and threw an early, dinosaur-themed fourth birthday party for her son, Ben, during a week on the coast.

Border agents recover $250K worth of marijuana near Niagara Falls

NIAGARA FALLS, N.Y. — U.S. Border Patrol agents recovered 118 pounds of marijuana near Niagara Falls, a discovery that is worth approximately $250,000, authorities said. According to a news release, U.S. Customs and Border Protection officials said the New York State Parks police was called by a citizen on June 17, who reported “suspicious activity” at Whirlpool State Park in Niagara Falls, New York. The person said that while walking the trail along the lower Niagara River at 2:00 a.m. EDT, he noticed someone dragging what appeared to be multiple plastic-wrapped packages, the release stated.

DENVER — (AP) — A Colorado man was shopping when he heard the gunfire that killed a suburban Denver police officer, rushed out of the store with his gun and shot the suspect, according to a worker who saw the shooting. Bill Troyanos told Denver news station KMGH-TV that he...