By Kiara Alfonseca
Posted by
ABC News
13 days ago 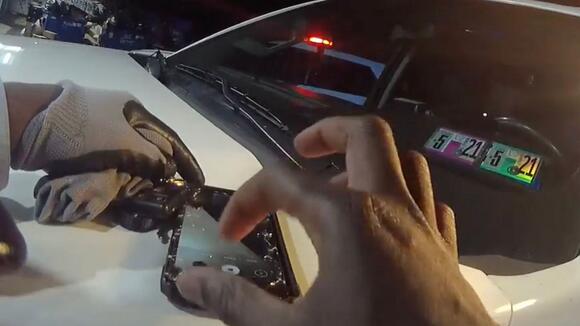 A Philadelphia police officer is under internal investigation for allegedly deleting a suspect's cellphone video during an arrest.

On the night of March 23, Jacob Giddings was sitting in a vehicle at a gas station when he was approached by police. According to the suspect's attorney, Lennon Edwards, an officer asked him for identification but did not offer an explanation for the request.

The officer then opened the door to Giddings' car, and Giddings told the officer he was going to record the incident, Edwards said.

MORE: Police oversight boards are proliferating, but do they actually work?

Body camera footage shared with ABC News appears to show Giddings and another man recording the officers as he sits in his vehicle, saying, "I got you on camera, go ahead and grab me again." The officer then appeared to grab and pull Giddings out of his car. Edwards said the phone fell during the altercation.

Giddings was then arrested. Edwards said there was a warrant out for Giddings' arrest for an incident in November 2020, but he said his client had no knowledge of it.

Bodycam footage also appears to show the officer picking up a phone from the ground and deleting a video from the device. Edwards said Giddings asked what happened to the video, or if it was still on the phone, and the officer said he didn't know.

"[The officer] knows what he did, and the two officers standing there know what he did," Edwards said. "And none of them, none of the three officers say anything. They are all complicit in violating Mr. Giddings' rights in tampering with evidence."

Philadelphia Police Commissioner Danielle Outlaw told Philadelphia ABC station WPVI that the officer has been on restrictive duty since April pending the outcome of the internal investigation into the incident.

Edwards said police reform is a priority in Giddings' case. He is also seeking monetary damages.

"We're looking for a serious reaction by the people who were supposed to do something, beginning with the department where he worked and moving on up the ladder," Edwards said. "What this officer did was deleting evidence. He is essentially tipping the scales of justice in his favor."

The PPD Office of Public Affairs declined to comment further on the investigation.

June 24 (Reuters) - Hundreds of fire and rescue workers scoured through tons of rubble on Thursday after a 12-story oceanfront residential building partially collapsed in southern Florida, with at least one person dead and 51 still unaccounted for, officials said. Sally Heyman, a Miami-Dade County Commissioner, said officials have...

WASHINGTON, June 24 (Reuters) - U.S. House of Representatives Speaker Nancy Pelosi on Thursday created a new House committee to investigate the Jan. 6 attack on the U.S. Capitol, after Senate Republicans in May blocked an independent commission to probe the assault. Some 500 people have now been arrested in...

The CDC has extended its moratorium on evictions through the end of July to help families affected by the COVID-19 pandemic remain in their homes. "Red and Blue" anchor Elaine Quijano has more.

President Biden on Thursday announced he'd reached an infrastructure deal with a group of Republican and Democratic senators, saying both sides gave up some things they wanted to get a rare accord in a bitterly divided Washington, D.C. Biden acknowledged the deal would not include proposals he's made for spending...

June 24 (Reuters) - An indigenous group in the Canadian province of Saskatchewan on Thursday said it had found the unmarked graves of up to 751 people at a now-defunct Catholic residential school, just weeks after a similar discovery rocked the country. Prime Minister Justin Trudeau said he was "terribly...

Former President Trump on Thursday slammed the decision by a New York court to suspend his former personal attorney Rudy Giuliani 's license to practice law in the state, calling the former mayor "the Eliot Ness of his generation." The Appellate Division of the New York Supreme Court announced earlier...

Britney Spears's cries for help in court have cast a critical light on conservatorships, as the public has become both more aware and more sensitive to mental health struggles. But her explosive claims Wednesday have also reignited a national conversation on freedom, dignity and how much is too much when it comes to legal intervention.

Russia warns Britain it will bomb ships next time

LONDON, June 24 (Reuters) - Russia warned Britain on Thursday that it would bomb British naval vessels in the Black Sea if there were any further provocative actions by the British navy off the coast of Russia-annexed Crimea. Russia summoned the British ambassador in Moscow for a formal diplomatic scolding...

WASHINGTON (AP) — In the case of the cursing cheerleader, the Supreme Court notched a victory for the free speech rights of students Wednesday, siding with a high school student whose vulgar social media post got her kicked off the junior varsity squad. The court voted 8-1 in favor of...

A member of the Oath Keepers pleaded guilty on Wednesday to charges stemming from the riot at the Capitol, making him the first defendant in federal prosecutors' biggest case since Jan. 6 to enter a plea agreement. A federal district court judge in Washington, D.C., had abruptly scheduled a plea...