By Olafimihan Oshin
Posted by
The Hill
13 days ago 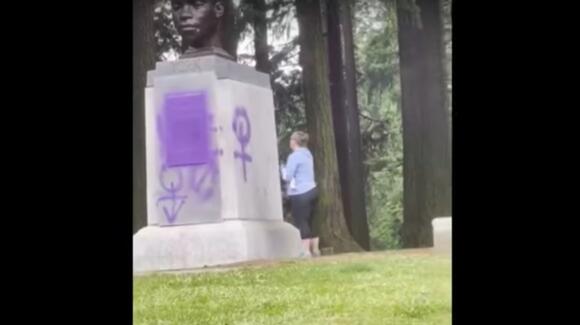 Video captured a white woman vandalizing a statue of the only Black member of the famous Lewis and Clark expedition, NBC-affiliate KGW reported on Wednesday.

Video obtained by the Portland, Ore., NBC-affiliate shows an unidentified white woman using purple spray paint to deface the statue of York, which honors an enslaved member of the Lewis and Clark expedition.

In an obscenity-laced rant, the woman says that she is a victim of “prejudice against Black and Hispanic people," and says that replacing the statue of a white man with a Black man is “not unity." She also shared her personal information with a bystander who recorded the incident.

The statue of York, who was the first Black person to cross North America and reach the Pacific Coast, replaced a statue of Harvey Scott, who was the longtime editor and owner of the Oregonian newspaper, according to NBC-affiliate KGW.

Scott’s statue was toppled in October because of his past conservative views on women's suffrage, which he opposed.

This is the second time within three months that the statue of York has been vandalized, according to the Williamette Week report.

Portland Parks & Recreation told KGW that it's already working on removing the paint and determining the cost of the damage. The Portland Police Department is investigating the incident.

The Hill has reached out to Portland Police for more information

A Florida state trooper is coming under fire after repeatedly tasing a teenager in his girlfriend's backyard. The trooper, George Smyrnios, followed 16-year-old Jack Rodeman into the backyard of the Fort Myers home last week after deeming him suspicious. In video footage of the incident shared by CBS News, Rodeman...

Several Black police officers say they faced racism by colleagues during their time at the University of Washington, The New York Times reported on Tuesday. Five Black officers in the campus police department filed an $8 million lawsuit against the university, alleging a culture rooted in racism, racial slurs and vile comments made toward Black people, calling it "unbearable."

A British officer has been found guilty in the 2016 death of former soccer star Dalian Atkinson. A jury found Constable Benjamin Monk guilty of manslaughter after he kicked Atkinson in the head and used a Taser to subdue him, The Associated Press reported. Monk used the Taser on Atkinson...

A witness in the Colorado shooting that left a police officer dead said another onlooker shot the suspect during the incident, The Associated Press reports. Bill Troyanos was working at an Army Navy Surplus store in Arvada, Colo., on Monday when he heard gunfire outside. John Hurley, a store patron, also heard the shots and ran outside with a gun in hand, Troyanos said.

Former Nickelodeon star Jared "Drake" Bell pled guilty Wednesday to charges following an alleged incident with a 15-year-old girl at a Cleveland, Ohio, night club and inappropriate messages that Bell sent her. Bell, 34, pleaded guilty via Zoom to one count of felony attempted child endangerment, and a misdemeanor charge...

Thousands sent to emergency rooms every year due to violent police encounters: investigation

More than 400,000 people have been treated in emergency rooms as a result of violent interactions with police since 2015, according to an analysis published Wednesday by NBC News and The Marshall Project. The report revealed that while arrests very rarely include uses of force by police, more than half...