By Gino Spocchia
Posted by
The Independent
2 days ago 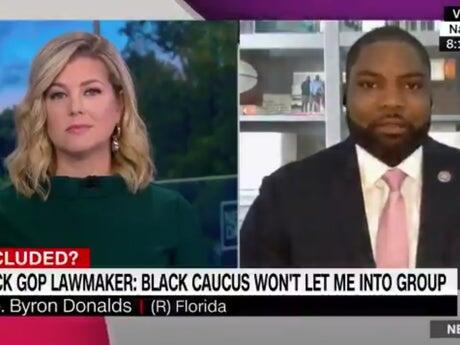 A Black Republican congressman was blindsided by a CNN anchor after she confronted him with Donald Trump ’s racist comments.

During an appearance on Thursday, Florida congressman Byron Donalds complained that he had not been invited to join the Congressional Black Caucus (CBC) before CNN’s Brianna Keilar presented the footage.

"I have a perspective being a 42-year-old Black man who has come up in America after a lot of the battles through the civil rights movement that I think would be helpful and a helpful perspective to the CBC," Mr Donalds told CNN.

Ms Keilar then accused the congressman of backing the former US president and false allegations of election fraud that were “the basis, really, for all of the bills” trying to reduce voting access for Black Americans.

She added: “Do you think that that is something that might be incongruent with the mission of the CBC?"

After a brief discussion about voting rights, Ms Keilar then played a reel of Mr Trump’s remarks on race, including his defence of the the Confederate flag.

The former president was also shown saying that NFL players who protested against racism and police brutality were a “son of a b****”.

CNN’s Ms Keilar then continued: "Do you think that your defence of a person that said things like that might be incongruent with the mission of the CBC?"

Mr Donald hit back by saying that "whatever the president said in the past has nothing to do with this discussion at all”, before the CNN anchor interjected: "Well, you've defended him."

"Please don't cut me off," the congressman told Ms Keilar. "I have not cut you off in this interview, please do not do that to me. Thank you. As a Black man in America, I'm allowed to have my own thoughts on who I choose to support and who I choose not to support”.

In a statement, Mr Donalds told The Independent : "The Congressional Black Caucus has a stated commitment to ensuring Black Americans have the opportunity to achieve the American Dream.”

“As a newly elected Black Member of Congress, my political party should not exempt me from a seat at the table dedicated to achieving this goal.”

According to Buzzfeed News , the Black caucus is against Mr Donald’s attempts to join, although it has included Republicans in the past.

The White House press secretary turned Fox News contributor Kayleigh McEnany has claimed she “never lied” while speaking for Donald Trump. Addressing a conservative group on Sunday, McEnany said of her first steps in the role: “And then there was the question, ‘Will you ever lie to us?’, and I said without hesitation, ‘No’, and I never did, as a woman of faith.

New York (CNN Business) — Leaders from CNN, The New York Times and The Washington Post will meet with US Attorney General Merrick Garland on Monday to discuss the Trump administration's controversial leak investigation that involved seeking reporter records from all three media outlets. The planned meeting comes after the...

House Speaker Nancy Pelosi said Sunday that Congress will investigate what she called the Trump Justice Department‘s “rogue” efforts to seize the private information of Democrats as part of its probe into media leaks, saying it went “beyond Richard Nixon.”. “In terms of the data mining, what the Republicans did,...

Pelosi says House leadership 'did not rebuke' Omar over comments about US, Israel, Hamas and Taliban

House Speaker Nancy Pelosi on Sunday said House leadership "did not rebuke" Democratic Rep. Ilhan Omar last week, after criticism from the left that the caucus was unfairly targeting Omar and mischaracterizing her comments about the US, Israel, Hamas and the Taliban.

‘I didn’t take an oath to defend Donald Trump’: Rep. Tom Rice tests whether Republican voters will support a conservative who crossed Trump

MYRTLE BEACH, S.C. — Republican Rep. Tom Rice of South Carolina has been a reliable conservative during his five terms in Congress, and he was a strong supporter of former president Donald Trump and his agenda. As a member of the House Ways and Means Committee, Rice helped draft what...

​Rudy Giuliani slammed President Biden for wanting to rejoin the Iranian nuclear accord. “He’s caving into Iran before Iran even wants to make a deal,” the former mayor told John Catsimatidis on his WABC 770 AM radio show in an interview that aired Sunday. “He’s already let a couple of...

Vermont Senator Bernie Sanders on Sunday said that Joe Biden's 2020 campaign made him feel "very welcome," while Hillary Clinton's 2016 campaign "tolerated" him because they wanted his support. Sanders, an independent, ran as a presidential candidate in the Democratic primary last year against Biden. Following a string of losses...

Another anti-Trump media lie and other commentary

Remember the media’s ironclad conviction that then-President Donald Trump had ordered peaceful protesters to be cleared out of Washington’s Lafayette Park with tear gas last summer, so he could stage a photo op? “It provoked weeks of unmitigated media outrage, presented as one of the most egregious assaults on the democratic order in decades,” recalls Glenn Greenwald at his Substack. That is, until Wednesday afternoon, when the independent Inspector General of the Interior Department, Mark Lee Greenblatt, issued his office’s findings into the incident. The upshot: “The media narrative was false from start to finish.” The US Park Police had cleared the park so a private contractor could install fencing — a decision made before officials knew of Trump’s planned visit to the park. Greenwald concludes: “The corporate outlets that most loudly and shrilly denounce ‘disinformation’ . . . are, in fact, the ones who spread disinformation most frequently.”

Andy Slavitt, who served until last week as a senior advisor to President Joe Biden on COVID-19, strongly criticized former President Donald Trump's response to the pandemic, arguing he had committed "deadly sins." The businessman, who previously served as the acting administrator of the Centers for Medicare and Medicaid Services...

Former Secretary of State Mike Pompeo pushed back against assertions that former President Trump was not tough on Russia during an interview on “Fox News Sunday.”. Host Chris Wallace talked about former Trump’s record on Russia, saying that his administration did not stop Russia from continuing to build the Nord Stream pipeline, a gas line running from Russia to Germany.

House Speaker Nancy Pelosi looked to brush aside recent controversial comments from Rep. Ilhan Omar, D-Minn., that drew criticism from fellow Democrats for comparing the U.S. and Israel to Hamas and the Taliban. In an appearance on CNN's "State of the Union," Pelosi called Omar a "valued member of our...

The latest GOP "jihad" on free speech was triggered at a high school graduation ceremony on Thursday, when the student body president at Justice High school in Fairfax County, Virginia recited the pledge of allegiance and replaced “God” with the word “Allah” — as in one nation “under Allah.”. Among...

‘I was right’: Donald Trump sounds off

Former President Donald Trump has offered a handy summary of recent political developments, investigations and media coverage which suggests his perceptions about certain matters were correct. Mr. Trump suggests that analysts and rivals are changing their tune about his time in office. “Have you noticed that they are now admitting...

Washington (CNN) — Democratic Rep. Alexandria Ocasio-Cortez is "inclined to say yes" as to whether Justice Stephen Breyer should retire from the Supreme Court in the coming weeks so President Joe Biden can nominate a liberal jurist to replace him. "You know, it's something I think about, but I would...

Former Secretary of State Mike Pompeo on Sunday said that when he hears the Biden administration talking about "taking America back" he said they are talking about taking the United States back to the years when "America was weak" during the Obama administration. "Fox News Sunday" anchor Chris Wallace asked...

Rep. Byron Donalds would be the only Republican member of the Congressional Black Caucus — if they let him join. But the group has not provided an invitation to Donalds for the last six months and appears to be trying to block him from becoming a member based on his party and politics.

Black conservative Rep. Byron Donalds is taking up arms against the Congressional Black Caucus after they rejected his bid to join — slamming their ideological intolerance in a new interview, before a meeting with former President Donald Trump. Freshman lawmaker Donalds (R-Fla.) met with the 45th commander-in-chief Thursday at his...

Trump Says Senate Would Be 60 Dems vs. 40 Republicans if Not for Him, Rips McConnell

Former President Donald Trump ripped Senate Minority Leader Mitch McConnell, a Kentucky Republican, blaming him for the GOP losing the Senate while the former commander in chief argued that it would have been worse if it wasn't for his own efforts. Trump made the remarks during a live video message...