By Scott Wong
Posted by
The Hill
9 days ago 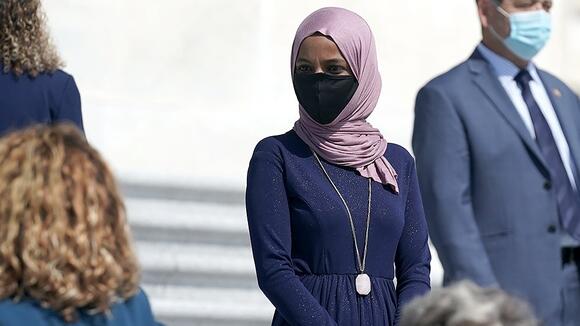 With a rare joint statement, Speaker Nancy Pelosi (D-Calif.) and her entire leadership team on Thursday sought to quell a growing controversy over Rep. Ilhan Omar ’s (D-Minn.) remarks equating war crimes committed by the U.S. and Israel to those by the Taliban and Hamas terrorist groups.

“Legitimate criticism of the policies of both the United States and Israel is protected by the values of free speech and democratic debate. And indeed, such criticism is essential to the strength and health of our democracies,” the Democratic leadership team said in its statement.

“But drawing false equivalencies between democracies like the U.S. and Israel and groups that engage in terrorism like Hamas and the Taliban foments prejudice and undermines progress toward a future of peace and security for all," the statement adds.

In her clarification, Omar, a progressive Minnesota Democrat and one of the first Muslim women elected to Congress, explained that her original comments had focused on ongoing International Criminal Court probes — “not a moral comparison between Hamas and the Taliban and the U.S. and Israel."

"I was in no way equating terrorist organizations with democratic countries with well-established judicial systems,” said Omar, a Somali refugee.

That clarification appeared to satisfy Pelosi and her team, who said in their Thursday statement: “We welcome the clarification by Congresswoman Omar that there is no moral equivalency between the U.S. and Israel and Hamas and the Taliban.”

Late Wednesday, Omar took friendly fire as a dozen Jewish House Democrats, led by Rep. Brad Schneider (D-Ill.), issued a joint statement calling on Omar to clarify her remarks and objecting to any comparison of the U.S. and Israel and the Taliban and Hamas.

At first, Omar was defiant, accusing her Democratic colleagues of engaging in “islamophobic tropes” and trying to harass and silence her. Omar allies said these Democrats had put her safety at risk.

But hours later, Omar backed down, issuing a more nuanced statement that explained that she was speaking about specific human rights investigations rather than making a “moral comparison between Hamas and the Taliban and the U.S. and Israel.”

After equating US, Israel to Hamas, Taliban, congressmen call to censure Ilhan Omar

U.S. Rep. Ilhan Omar, D-Minn. (Photo credit: Gage Skidmore, Wikimedia license CC BY-SA 2.0) Since she was elected to Congress in 2019and even before then, Rep. Ilhan Omar has made a series of inflammatory anti-Israel and anti-Semitic statements. And now she is facing blowback yet again for equating Israel and the United States with the Taliban and Hamas.

Most voters disagree with Democratic Rep. Ilhan Omar's recent comparison of the United States to terrorist groups such as Hamas and the Taliban, according to a new poll. The poll, conducted by Rasmussen and released on Wednesday, shows that 61% of voters disagree with Omar's recent “anti-American rhetoric" that has sparked backlash on social media and on Capitol Hill.

Rep. Ilhan Omar, D-Minn., on Saturday renewed the call for reparations as the country recognized Juneteenth as a federal holiday for the first time. President Biden made June 19, or Juneteenth, a federal holiday on Friday to celebrate the emancipation of Black slaves after the Civil War,. "Proud #Juneteenth is...

The Biden administration is trying to revive a form of thoroughly corrupt, politicized shakedowns. Thankfully, Sen. Tommy Tuberville is trying to stop them. The shakedowns were a favorite tactic of the Justice Department under the Obama-Biden administration, but they had been stopped under former President Donald Trump. On Joe Biden’s first day as president, he ordered the department to “review” the policy with an eye toward reinstating it. Tuberville, a Republican from Alabama, on Wednesday introduced the “Stop Settlement Slush Funds Act of 2021” to block him.

Congress is barreling toward a fight as soon as next month over raising the debt ceiling, creating a huge challenge for President Biden and Democratic leaders in Congress. Under a 2019 deal during the Trump administration, Congress agreed to let the government borrow through July 31. The Treasury Department at that point can take what’s known as extraordinary measures to keep the government solvent, but it’s unclear how long it will be able to do this.

Senate Democrats in tough races next year, namely Sens. Mark Kelly (Ariz.) and Maggie Hassan (N.H.), say it's more important for an infrastructure spending bill to be bipartisan than for it to fit in all the priorities that President Biden has outlined and his party base are clamoring for. The...

Cold reality intrudes on Biden’s first few months as leftist Democrats frustrated with president’s agenda stalling in Congress. They were pointed questions, not personal criticisms. But they will have conveyed a warning to Joe Biden that the patience of the left of the Democratic party and its leaders in ‘the Squad’ of progressive politicians is not infinite.

Seeking justice in the wrong places: Why Rep. Omar’s premise is wrong

Rep. Ilhan Omar embroiled herself in yet another controversy recently when she asked Secretary of State Anthony Blinken about the United States position on the International Criminal Court, and subsequently tweeted: “We must have the same level of accountability and justice for all victims of crimes against humanity. We have seen unthinkable atrocities committed by the U.S., Hamas, Israel, Afghanistan, and the Taliban. I asked @SecBlinken where people are supposed to go for justice.”

House Speaker Nancy Pelosi has selected which Democratic members she will appoint to a new select committee focused on addressing wealth inequality — with a former Wall Street financier-turned-nonprofit chief leading the team that includes AOC being in charge of “generational disparities and increasing worker power.”. Pelosi (D-Calif.) unveiled her...

Waltz Says Ilhan Omar’s Antisemitism is ‘Ingrained’ in her (VIDEO)

Washington—Florida Rep. Michael Waltz (R) and US Army Green Beret sat down with The Floridian to discuss his recently filed resolution to censure “The Squad” or the “Hamas Squad” in the House of Representatives for their ongoing anti-Israel, anti-Jewish positions, particularly Rep. Ilhan Omar who has espoused antisemitism recently equated the United States to the terror group Hamas.

House Speaker Nancy Pelosi didn’t directly answer a yes-or-no question about whether an "unborn baby at 15 weeks is a human being," instead reaffirming a woman’s right to choose. "Let me just say that I am a big supporter of Roe v. Wade. I am a mother of five children...

Cenk Uygur, the founder of The Young Turks, on Thursday accused the Democratic establishment of lying “nonstop” and being “incredibly weak,” as the party engages in an internal feud surrounding Rep. Ilhan Omar ’s (D-Minn.) most recent controversial comments. Omar faced criticism last week for her questioning of Secretary of...

WASHINGTON (AP) — Democrats are eyeing a $6 trillion infrastructure investment plan that goes far beyond roads and bridges to include core party priorities, from lowering the Medicare eligibility age to 60 and adding dental, vision and hearing benefits to incorporating a long-running effort to provide legal status for certain immigrants, including “Dreamers.”

Our view: Omar’s remarks, rush to her defense are both distressing

U.S. Rep. Ilhan Omar, D-Minn., recently equated the U.S. and Israel with Hamas, the internationally labeled terrorist group. Some criticism finally seems to have reached Omar and she has slightly backtracked on her claims of equivalency. Omar, unfortunately has a history of this sort of thing. When she was once...

(JTA) — The Orthodox Union is setting up meetings between members of Congress and Orthodox Jewish constituents who are alarmed by antisemitic incidents since last month’s Israel-Gaza conflict, and by what they see as Congress’ failure to have Israel’s back. “Many in Congress failed to stand up for Israel’s right...

Over four months after Democrats voted to strip Rep. Marjorie Taylor Greene of her committee assignments, the Georgia Republican is seeking to join a new panel that House Speaker Nancy Pelosi has described as a way “to find common ground” on the economy. The businesswoman told Secrets her experience running...

President Biden called Thursday's decision by the Supreme Court to throw out a Republican challenge to the Affordable Care Act a "major victory for all Americans benefitting from this groundbreaking and life-changing law." Why it matters: The Supreme Court on Thursday ruled 7-2 to toss the lawsuit and allows former...

The House voted Thursday to repeal a 19-year-old military authorization Congress passed to give legal backing to the Iraq War with the support of Democrats and Republicans and the endorsement of the White House — an unprecedented coalition to end post-9/11 authorities to engage in hostilities that critics argue are outdated.