By Rebecca Beitsch
Posted by
The Hill
7 days ago 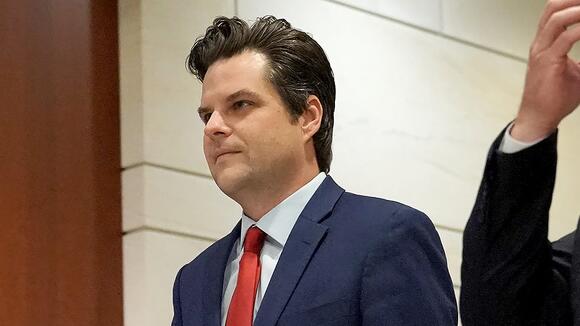 Rep. Matt Gaetz (R-Fla.), who is currently the subject of an FBI probe, had a chance Thursday to question the man leading the agency responsible for investigating him.

Gaetz came face-to-face with FBI Director Christopher Wray as the latter appeared before lawmakers on the House Judiciary Committee.

The rare scene comes as Gaetz faces an investigation into possible sex crimes and obstruction of justice. A friend of Gaetz's, Joel Greenberg, has pleaded guilty to sex trafficking a 17-year-old. Gaetz has denied all wrongdoing.

Gaetz used the opportunity with Wray to ask about the FBI’s role in investigating the origins of the coronavirus.

“I'm not sure that there's much I can say about any specific investigation,” Wray said.

In April, fellow committee member Rep. Ted Lieu (D-Calif.) argued Gaetz should be removed from the committee because it has oversight over the FBI, calling it an “untenable conflict of interest.”

Republicans on the committee made similar calls amid news that Rep. Eric Swalwell (D-Calif.), another committee member, had been targeted by a suspected Chinese spy.

WASHINGTON, June 17 (Reuters) - A U.S. House of Representatives committee on Thursday requested documents from the Justice Department related to the Trump administration's seizure of phone records from lawmakers, journalists and the then-White House counsel as part of its investigations into leaks of classified information. The House Democrats, led...

Rep. Matt Gaetz has appeared on TV to spread a conspiracy theory that the FBI was involved in plotting the January 6 attack in the Capitol after infiltrating far-right groups. During an appearance on Newsmax show Cortes & Pellegrino on Thursday, the Florida Republican said he believed that the FBI might have had a role in "organizing and participating" in the attack and had written a letter to FBI Director Christopher Wray to demand answers.

BREAKING: Gaetz Demands FBI Director Come Clean on FBI’s Role During Capitol Incident. As if to validate what 100 Percent Fed Up has been reporting on since the beginning, Congressman Matt Gaetz is the latest and most high-profile public figure to openly call for FBI Director Christopher Wray to thoroughly reveal any and all roles the FBI had in instigating the “riots” on January 6th.

Matt Gaetz sent a letter to FBI Director Christopher Wray demanding answers on the FBI’s role in the events that took place on January 6th. This comes one day after Revolver News dropped a bombshell report outlining the fact that the federal government may have been involved on January 6th:

Now more than five months after the January 6th Capitol riot, Congressman Matt Gaetz (R-FL) is now leading an effort to demand transparency on the FBI’s involvement with the event that has left figures like him to blame. Along with other notable Republicans such as Rep. Paul Gosar (R-AZ) and...

Spare me the pious lecture and phony indignation. Rep. Adam Schiff, D-Calif., threw an apoplectic fit the other day when he learned that what he did to others was done to him. There is some perverse irony in all of this. But, of course, Schiff neglected to mention his own hypocrisy.

Fox News, right-wing websites and Republican lawmakers are promoting a new false flag conspiracy that the FBI orchestrated the deadly assault on the US Capitol.

Republican Alabama Representative Mo Brooks has announced that an arrest warrant for trespassing has been issued against private investigator Christian Seklecki. Seklecki was hired by Democratic California Representative Eric Swalwell to serve a subpoena against Brooks. The subpoena is part of Swalwell's lawsuit alleging that Brooks incited the January 6 insurrection at the Capitol.

Congressman Eric Swalwell (D-CA) tells Kasie Hunt that he believes the seizure of his and Rep. Adam Schiff's phone records is "suspicious" and "politically motivated" given others had access to the same information but did not have their data seized. He also says newly released emails from the Trump White House to the Justice Department pressuring them to challenge the 2020 election outcome "on brand" for the former president.

An unintended problem with the GOP's new Jan. 6 conspiracy theory

On his Fox News program earlier this week, Tucker Carlson raised the idea that the Jan. 6 insurrectionist attack on the Capitol may have secretly been a scheme hatched by the FBI. Yesterday, the day after the broadcast, a group of far-right House Republicans wrote to the FBI, demanding a response to the kooky conspiracy theory.

Rep. Adam Kinzinger (R-Ill.) pointed to a conspiracy theory being circulated among members of Congress and in conservative media suggesting that federal authorities helped plan the Jan. 6 rioting by supporters of former President Trump at the U.S. Capitol as indicative of Trump's legacy. "It's not the far, far right,...

In April of last year, lockdowns started going into effect and this pandemic took off. People were fighting over toilet paper and hand sanitizer was nearly impossible to find at the store. The MSM claimed that this was all due to the Wuhan wet market and a bat. But at the time Chinese Defector Dr. Li-Meng Yan was being picked up by the FBI. Yan had been a high-level Intelligence Agent before she defected. She came to warn the United States about how this virus was leaked from their Wuhan Novel Respiratory Coronavirus lab. The FBI has been sitting on this information... Rep Matt Gaetz questioned FBI Director Wray about this blatant negligence.

House Oversight and Reform Chairwoman Carolyn Maloney called Jan. 6 "a shocking failure by the FBI and military," during a House hearing, citing 50 incidents where she said Parler tried to warn the FBI about posts. Rep. Maloney and CNN's Chris Cuomo discuss.

Rep. Matt Gaetz is questioning the role "federal undercover agents or confidential informants" played in the Jan. 6 Capitol Hill siege. On Tuesday, Gaetz wrote a letter to FBI Director Christopher Wray, asking three questions regarding the "extent ... [to which] the three primary militia groups ... [were] infiltrated by agencies of the federal government," "how many federal undercover agents or confidential informants were present at the Capitol or in the Capitol during the 'siege,'" and "how many [of the unindicted Jan. 6 co-conspirators] worked as a confidential informant or as an undercover operative for the federal government."

Senate Minority Leader Mitch McConnell (R-KY) warned that any potential investigation into former Attorney General Bill Barr in relation to reports that the Department of Justice under former President Donald Trump obtained metadata on two members of Congress risks turning into a "witch hunt." McConnell spoke from the floor of...

(CNN) — Some Republican lawmakers are doubling down on reframing the attack on the US Capitol on January 6, falsely arguing it was a mostly peaceful event, antifa was responsible for the attack and that rioters were not armed. Several of these incorrect narratives were repeated during a Tuesday hearing on the attack held by the House Oversight and Reform Committee, along with some new misinformation.

The FBI says the Capitol riot was 'terrorism.' Democrats (and Republicans) should, too.

On Tuesday, we heard FBI Director Christopher Wray testify before the House Oversight Committee that Jan. 6 was an act of “domestic terrorism” that has “no place in our democracy.”. We've heard Wray make similar claims since March, when he testified before the U.S. Senate that the Jan. 6 attack...

Former Deputy FBI Director-turned-CNN pundit Andrew McCabe was slammed on Tuesday for asserting that the motive behind the 2017 shooting of Republican lawmakers is still unknown. Monday marked the four-year anniversary of the attack at a baseball field in Alexandria where top Republicans were practicing ahead of the congressional baseball...

Rep. Liz Cheney (R-Wyo.) accused Rep. Paul Gosar (R-Ariz.) Tuesday of lying about the Capitol Police officers who helped defend the building from pro-Trump rioters on Jan. 6, following Gosar's comment on the officer who fatally shot rioter Ashli Babbitt that day. Why it matters: Cheney accused Gosar, who has...