Schumer bemoans number of Republicans who believe Trump will be reinstated: 'A glaring warning'

By Celine Castronuovo
Posted by
The Hill
8 days ago 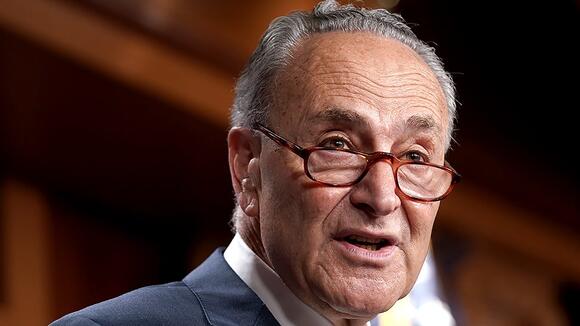 Senate Majority Leader Charles Schumer (D-N.Y.) on Thursday said that the number of Republicans who believe former President Trump will be reinstated as commander in chief later this year represents a “glaring warning” on continued widespread acceptance of Trump’s unsupported claim of a stolen 2020 election.

In remarks from the Senate floor, Schumer referenced a recent Politico-Morning Consult poll that found that 29 percent of Republicans believe that Trump will be placed back in the Oval Office later this year.

The poll came after New York Times reporter Maggie Haberman said last week that Trump has been pressuring conservative media to legitimize his theory of a “rigged” election and has been telling people in his inner circle that he believes he will be reinstated by August of this year.

While 61 percent of GOP survey respondents dismissed the conspiracy theory, Schumer said the nearly 3 in 10 Republicans who supported Trump’s claim “is a depressing fact of our times that there is an audience out there who will literally believe anything the former president says, no matter how unrealistic or untrue.”

“They believe him when he just abjectly lies,” Schumer said, adding, “It is a glaring warning that the big lie has created fertile ground for all sorts of insane conspiracy.”

“Of course, the idea of 'reinstatement' comes from disgraced former President Trump himself and is nothing more than the deluded ramblings of a defeated politician,” the Democratic leader said before noting, however, that the blame “does not rest only with the former president.”

Schumer slammed his Republican colleagues on Capitol Hill, arguing “Washington Republicans and the political right” have “not done enough to stand up to the big lie.”

“After making a few brave noises in the wake of Jan. 6, Republican leadership here in Washington now seem to have traded political courage and truth for appeasement,” he said.

“He empowered his deputies to take part in painstaking negotiations to establish an independent commission to study those events — and then promptly voted against it,” Schumer argued. “He convened his entire conference to deliver a pink slip to the one member of his leadership team who dared to repeat the truth that President Biden is the president.”

Schumer asserted Thursday that the “Republican Party is now wrapped around the axle of the big lie,” adding that a “big reason” for this is because “Republican leaders are unwilling to move on from Trumpism.”

“The truth is: The big lie has consequences,” the Senate leader added. “It erodes our trust in elections, faith in our democracy, and it’s gnawing away at the very right to vote in America.”

Haberman said last week that Trump has been “laser focused” on the Arizona election audit fueled by GOP claims of fraud in Maricopa County.

Election experts and Democrats, including Arizona Secretary of State Katie Hobbs, have called the recount a solely partisan effort based on unsupported voting fraud allegations.

Former President Donald Trump had promised to endorse a Republican challenger to Alaska Sen. Lisa Murkowski. On Friday, he kept that promise. Trump announced his support for Kelly Tshibaka, Alaska’s former commissioner of the Department of Administration. “Lisa Murkowski is bad for Alaska,” his statement read. “Her vote to confirm...

Poll: 30 percent of GOP voters believe Trump will 'likely' be reinstated this year

Thirty percent of Republican voters say they believe former President Trump will "likely" be reinstated to office this year, a new Hill-HarrisX poll finds. The results are comparable to other polling from Politico-Morning Consult released this month that showed nearly three in 10 Americans believe Trump will be reinstated. While...

Letters to the Editor: How principled conservatives can crush Trump’s Republican Party

To the editor: The Times’ White House editor Jackie Calmes paints a frightening picture of the GOP’s rightward lurch. The danger to our democracy seems even more acute if we combine Republican radicalization with the barrage of voter suppression measures taking effect or about to take effect in many states. Senate Bill 1 and any other legislation in Congress to correct this appear dead in the water.

Analysis: Trump was wrong about the law, Obamacare politics and his judges

WASHINGTON — Former President Donald Trump promised to repeal Obamacare, the health insurance program that helped fuel the backlash tea party movement and ultimately his own candidacy. If Trump couldn't get Congress to do away with the law — and he couldn't, even with Republicans in control of both chambers...

Graham quips key to working with Trump: We both 'like him'

Sen. Lindsey Graham (R-S.C.) offered tongue-in-cheek insight on Friday into why his working relationship with former President Trump is successful: They both like Trump. Graham, speaking at the Faith & Freedom Coalition Conference, showered praise on the former president and recounted how they went from bitter enemies during the 2016 presidential race to close allies, with Graham emerging as one of Trump's staunchest defenders after he won.

Former President Donald Trump endorsed the primary opponent to Sen. Lisa Murkowski on Friday, declaring his support for Kelly Tshibaka Alaska's former commissioner of administration. "Lisa Murkowski is bad for Alaska. Her vote to confirm Biden’s Interior Secretary was a vote to kill long sought for, and approved, ANWR, and...

Former President Donald Trump formally endorsed Alaska Republican Senate candidate Kelly Tshibaka Friday, saying in a statement that GOP incumbent Lisa Murkowski “has got to go!”. Trump said earlier this year that he would not endorse Murkowski in next year’s election, even vowing to travel to The Last Frontier to...

The Supreme Court has handed Republicans the perfect opportunity to lay down their weapons. Attacking this health care law is both cruel and futile.

Vladimir Putin Says Joe Biden is 'Intelligent, Collected, Does Not Miss a Thing'

Russian President Vladimir Putin gave high marks for U.S. President Joe Biden after their meeting in Switzerland this week—despite their rocky relationship of the past. "Biden is a professional, and you need to work very carefully with him so as not to miss something," Putin told reporters Thursday—a day after they met in the neutral site of Geneva, Russian state-owned media TASS reported. "He himself does not miss anything, I assure you. It was completely obvious to me."

The GOP’s gaslighting on Biden, Putin and Trump

Republicans got a lot out of the Trump presidency, including three Supreme Court justices, tax cuts and more of a fighting chance in future elections than Democrats would like to believe. One thing they did not generally get was the moral high ground or a coherent and consistent political ethos — beyond “Trump.” By constantly bulldozing norms and forcing his party to account for wild political shifts, Donald Trump often rendered his party mute when it came to its once-sacred values.

WASHINGTON — Progressives want to get to work on a massive $6 trillion economic package. Moderate Democrats say that's too pricey. From price tag to policy details, Democratic leaders are confronting early internal divisions over how to write a budget measure that can bypass a Republican filibuster in the Senate. They would need to unify their wafer-thin majorities in both the House and the Senate.

When former President Donald Trump visits the U.S.-Mexico border later this month, he should bring along $560,000 to pay off an outstanding debt, according to El Paso County Judge Ricardo Samaniego. Samaniego said Trump owes the city of El Paso that amount for his last trip there during his re-election...

Decade of defeats: The Republican failure to take down ObamaCare

The law that became Barack Obama’s presidential legacy and was dubbed "Obamacare," has been the scorn of Republican lawmakers since its passage in March 2010 – but the GOP has been unable to kill it. Despite having a GOP-controlled House and Senate during the first two years of Donald Trump’s...

GOP senator: I want to make Biden a 'one-half-term president'

Republican Sen. John Barrasso (Wyo.) last week said he wants to make President Biden a “one-half-term president” in 2022 by ensuring that Democrats no longer have complete control in Washington. “I’m looking forward to a very successful 2022,” Barrasso said during a breakfast discussion hosted by The Ripon Society on...

President Biden nominated Health and Human Services (HHS) official Christi Grimm on Friday to become the department’s permanent inspector general. Grimm, who has been serving as acting HHS inspector general since early 2020, was tapped to fill the role on a permanent basis after being targeted by former President Trump last year.

Senate Republicans Thursday said that they have no intention of supporting Sen. Joe Manchin's proposal for elections legislation, which was supposed to be a possible bipartisan compromise in lieu of Democrats' controversial elections bill, S.1. Senate Minority Leader Mitch McConnell, R-Ky., said Thursday that he hopes "all Republicans" will oppose...

WASHINGTON — If you want to see how Donald Trump remains the driving force in Republican politics, just look at the activity from GOP politicians who are up for re-election or running in Republican primaries next year. Eric Greitens, who’s running in a crowded field of candidates for Missouri’s open...

President Biden on Thursday will sign the bill making Juneteenth, a day celebrating the freeing of Black slaves after the Civil War, into a national holiday and make remarks alongside Vice President Harris. The event at the White House is expected to happen at 3:30 p.m. ET. The bill passed...