By John Kruzel
Posted by
The Hill
11 days ago 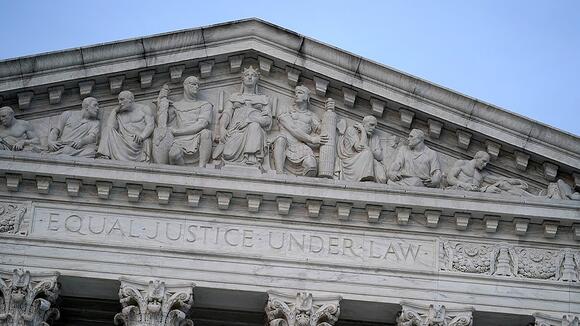 The Supreme Court split along unusual lines Thursday to rule in favor of a criminal defendant in a case that saw two of the most conservative justices form a bare majority with the court’s three liberals.

The 5-4 court sided with a defendant who argued he should not be subject to the Armed Career Criminal Act (ACCA), a 1984 law that imposes a 15-year mandatory minimum sentence on certain repeat offenders who are caught illegally possessing a gun.

Justice Elena Kagan , one of the court’s more liberal members, wrote the majority opinion, which ruled that defendant Charles Borden Jr.’s prior convictions did not rise to a level that required enhanced sentencing.

The ACCA applies only to career criminals with three or more prior convictions for violent felonies. But because one of Borden’s prior convictions was for aggravated assault that he committed recklessly, rather than with a greater degree of purpose in mind, his rap sheet did not require mandatory heightened sentencing, the court ruled.

“The question here is whether a criminal offense can count as a ‘violent felony’ if it requires only a mens rea of recklessness — a less culpable mental state than purpose or knowledge,” Kagan wrote. “We hold that a reckless offense cannot so qualify.”

The case arose after prosecutors sought to apply the ACCA’s sentencing guidelines to Borden after he pleaded guilty to illegally possessing a gun.

A lower federal court and Cincinnati-based appeals court rejected Borden’s argument for leniency, which prompted his ultimately successful appeal to the Supreme Court.

SPRINGFIELD – A recent U.S. Supreme Court decision could reignite a 10-year-old controversy in Illinois over whether faith-based charities can be prohibited from contracting with the state for foster care and adoption services on the grounds that they refuse to work with unmarried or same-sex couples. In a 9-0 decision...

The Supreme Court ruled on Monday that more than 250 administrative judges who hear patent disputes, some of them over billions of dollars, had been appointed in violation of the Constitution. The solution, a fractured majority of the court ruled, was to give the director of the U.S. Patent and...

The Supreme Court of the United States on Monday overturned an appellate court ruling that advanced a class action lawsuit against Goldman Sachs over the 2008 financial crisis, giving the bank another opportunity to argue that generically self-serving statements did not amount to securities fraud. Splitting with three of her...

High Court Says Patent Judges Must Be Appointed by President

WASHINGTON (CN) — The Supreme Court ruled Monday that administrative judges in the U.S. Patent and Trademark Office must be appointed by the president and confirmed by the Senate. “The exercise of executive power by inferior officers must at some level be subject to the direction and supervision of an...

In another case with an unusual lineup, the U.S. Supreme Court partly ruled for Goldman Sachs on Monday in a securities class action alleging the investment bank made generic statements that maintained its inflated stock prices. In an opinion by Justice Amy Coney Barrett, the court ruled that Goldman Sachs...

Is the Chief in Charge?

The Supreme Court decided two of this term's highest profile cases last Thursday in narrower and less controversial ways than many expected. The Chief Justice could not have scripted it any better. The term's major religious liberty decision, Fulton v. City of Philadelphia, produced a narrow, unanimous judgement, vindicating the...

Supreme Court Justice Brett Kavanaugh ripped the NCAA, saying the organization is 'not above the law'

Justice Brett Kavanaugh criticized the NCAA's business model as part of the Supreme Court's ruling against the organization on Monday.

Sen. Bernie Sanders, I-Vt., on Sunday declined to walk back his past comments that Supreme Court Justice Amy Coney Barrett would vote to end the Affordable Care Act after the newest justice in the country’s highest court voted in the majority to uphold the law. Sanders, head of the Senate...

The Supreme Court this week took one small step for religious freedom. Unfortunately, it failed to take the giant leap needed to fully protect religious practice. In Fulton v. City of Philadelphia, the court considered the plight of the Catholic church, which has served Philadelphia’s needy children in various ways since the late 1700s. For more than a century, Catholic Social Services has contracted with the city to connect children in need of a home with loving foster parents. In 2018, the city suddenly terminated Catholic Social Services’s contract because it discovered that the agency, in following Catholic church teaching on marriage, would not place children with same-sex couples.

The US Supreme Court on Thursday dismissed a lawsuit that sought to strike down the Affordable Care Act (ACA), rebuking a number of Republican-led states that want to see the law invalidated. The case, California v. Texas, was seen by many court observers as a sequel to the 2012 suit...

The Supreme Court’s Day of Reckoning is Coming

American Thinker – June 18, 2021 (emphasis added) The election of 2020 is going to lay bare the dereliction of the Supreme Court for all to see. The COVD-19 pandemic gave numerous state election officials an excuse to implement far-reaching changes to our election processes. Those changes obviously made our systems vulnerable to fraud. States implemented massive mail-in balloting at the same time they relaxed ballot security and voter identification. They even extended the voting periods — to give the criminals more time to commit their fraud.

Obamacare Wins For The 3rd Time At The Supreme Court

A pair of surprises from Amy Coney Barrett

Two of the biggest cases before the Supreme Court this term had also been languishing the longest on the court’s docket before they were finally decided on Thursday. The justices swatted down a third — and presumably final — attack against the Affordable Care Act. Then, they said the city of Philadelphia couldn’t exclude a Catholic social services agency from certifying potential foster parents because the group said its religious beliefs wouldn’t allow it to assess same-sex couples.

In a highly technical opinion, the Supreme Court held Thursday in Fulton v. Philadelphia that Catholic Social Services is exempt from municipal laws that would have required it to place foster children with gay couples. Yet despite this result, the case isn’t the win that religious liberty advocates wanted. The...

Justice Samuel Alito swung for the fences on religious liberty and came up short, but isn't done yet

Washington (CNN) — Justice Samuel Alito began this Supreme Court term with a public call to arms for greater protections for the free exercise of religion, but on Thursday could only express deep frustration that there wasn't a solid majority ready to follow his lead to issue a landmark opinion.

Another victory at the Supreme Court for religious groups

WASHINGTON — In another victory for religious groups at the Supreme Court, the justices on Thursday unanimously sided with a Catholic foster care agency that says its religious views prevent it from working with same-sex couples. The court said the city of Philadelphia wrongly limited its relationship with the group as a result of the agency's policy.

Roberts, Kavanaugh and Barrett have seized the Supreme Court for now

(CNN) — Chief Justice John Roberts, along with Justices Amy Coney Barrett and Brett Kavanaugh, demonstrated their collective power at America's highest court on Thursday. They fueled the Supreme Court's limited opinions on Obamacare and religious liberty, in action that marks a twist for the conservative-dominated bench and adds to the suspense of the next two weeks as the court finishes its annual term.

When former President Donald Trump nominated Justice Amy Coney Barrett to the Supreme Court last fall, many Democrats warned she would sink Obamacare. Barrett blew that prediction out of the water on Thursday when she voted with the court’s 7-2 majority to uphold the Affordable Care Act. For people who had been watching one of the year’s biggest Supreme Court cases closely, her decision came as no surprise.