By Oma Seddiq
Posted by
Business Insider
11 days ago 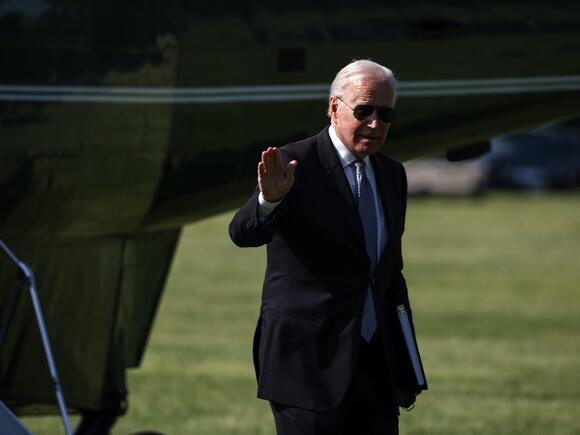 Pew polled 16,254 people in 16 countries from March 12 to May 26 and found a major shift in their attitudes since Trump left the White House.

The US's median favorability rating increased by 28 percentage points, one of the biggest spikes since Pew started polling more than two decades ago: It jumped to 62% this year from 34% in 2020.

In six countries - France, Germany, Japan, Italy, the Netherlands, and Canada - the share of favorable opinions of the US grew by at least 25 percentage points, returning to the high ratings seen during the Obama era.

Overall trust in the US president within the international community hit historic lows under Trump. The Pew study found that under Biden, the numbers had rebounded.

Among 12 nations surveyed this year and last year, a median of 75% expressed confidence in Biden to do the right thing when it comes to world affairs. A year ago, a median of only 17% said the same about Trump.

Public confidence was particularly high among the US's European allies. In Germany, 78% of respondents expressed confidence in Biden as a leader, compared with 10% who said last year that they had confidence in Trump.

Biden was sworn in after a tumultuous year in which the US faced a pandemic, a weakened economy, and a chaotic period after the presidential election that led to the insurrection at the Capitol on January 6.

Read the original article on Business Insider
View All 392 Comments

Former President Donald Trump on Monday said that he could still be in office if Mike Pence had refused to certify President Joe Biden's election win. On January 6, Pence declined Trump's demand that he block the certification by Congress of Biden's election as the 46th U.S. president. In a three-page letter to congressional members, the then-vice president said that he didn't share Trump's belief that he possessed the power to reject Electoral College votes.

Trump wishes a happy Father’s Day to ‘losers’ and ‘RINOs’

Former President Donald Trump on Sunday sent a Father’s Day message to his political adversaries — who he blasted as “losers” — and said he hoped US residents across the political spectrum could “come together.”. Trump, who is banned from Twitter and Facebook, released the statement through his political action...

WASHINGTON, June 21 (Reuters) - White House Press Secretary Jen Psaki said no policy decisions are expected from President Joe Biden's meeting with financial regulators on Monday. Climate change risks and increasing access to credit are among the issues that are likely to be discussed, the White House said earlier...

Why is Biden following in Trump's footsteps on Cuba?

Jorge Dávila Miguel writes that the Biden administration's relationship with Cuba continues to rely on policies made by the previous President.

President Biden repeated his opposition to raising the federal gas tax as he and a bipartisan group of senators negotiate on an infrastructure plan.

(CNN) — The coming days will go a long way to deciding if Joe Biden's presidency is one for the history books, or whether it will founder on deep US divides. The first six months of any administration before lawmakers go home for the summer are crucial to enacting an agenda. So it's crunch time for Biden's effort to conclude a deal on infrastructure reform while also honoring his promise to voters to cooperate with Republicans -- though they make no secret of the party's desire to destroy his presidency.

In 1988 Raisi was a member of the "death commission," a group that extrajudicially executed thousands of political dissidents in secret.

The radicalization of some Capitol rioters can be traced back to November 2008, with the election of the United States’ first Black president Barack Obama. CNN’s Drew Griffin reports. See more at CNN.com/capitolriot.

(CNN) — Republicans justify their plan to block sweeping voting rights legislation in the Senate this week by arguing that it's a huge federal power grab. But their past words and actions suggest they are again prioritizing their own political advantage over defending democracy. When former President Donald Trump lost...

Donald Trump wanted to send Americans who had Covid to Guantanamo Bay to stop them spreading the disease across the United States, a new book has claimed. In the early stages of the pandemic, it is alleged that Mr Trump suggested that Americans infected abroad should not be brought back home for care, but should instead be isolated at the military base in Cuba.

Fox News’ Maria Bartiromo on Sunday defended her reporting on a number of topics, telling critics, “Keep trashing me, I’ll keep telling the truth.”. Bartiromo, during an interview with Sen. Ron Johnson (R-Wis.) on “Sunday Morning Futures,” presented a list of what she called “the biggest lies of all,” which she said included the “Russia hoax based on a made-up dossier to try to take down Trump” and the impeachment of former President Trump “with absolutely no crimes attached to it."

When they met for their summit in Geneva earlier this week, Vladimir Putin surely thanked Joe Biden. That’s because Putin couldn’t have asked for a better gift than the one Biden gave him when Biden lifted sanctions on Russia’s Nord Stream 2 pipeline, clearing the way for the project’s completion.

The undying myth of GOP ‘obstructionism’

The media have spent the Joe Biden presidency thus far pressuring moderate Democrats to join the left’s efforts to destroy the filibuster. One way they do this is by cobbling together revisionist histories that cast Republicans as uniquely obstructionist and undemocratic. CNN’s White House correspondent John Harwood lays out that...

Joe Biden is better on the world stage than any president since George H.W. Bush

Bill Clinton, George W. Bush, Barack Obama and Donald Trump all came into office with little or no international affairs experience. And it showed.

‘Tip of the spear’: Texas governor leads revolt against Biden

With a focus on immigration and border security, GOP Gov. Greg Abbott is covering his right flank and carving out a distinct lane in the 2024 presidential sweepstakes.

Republicans adopted a harsher tone this week about the surge of noncitizens coming across the southern border, calling it not just a “border crisis” or a “constitutional crisis” but a “moral crisis” attributable to President Joe Biden. “What is happening on the border ... is, I think, a humanitarian crisis....

Outgoing North Carolina GOP Sen. Richard Burr disagrees with former President Donald Trump about who should succeed him in 2022. The senator has backed the Tar Heel State’s former Gov. Pat McCrory, whom he has declared to be “the only one in the race that can win the general election,” according to Politico. However, two weeks ago, Trump endorsed Rep. Ted Budd, who is also running.

Nearly a third of the country supports the unproven allegations President Joe Biden is only in the White House because of voter fraud, after months of former President Donald Trump and his followers continuing to spread baseless claims the 2020 presidential election was "rigged." The number, which Monmouth University found...

Things are about to get much harder for Biden and Democrats

In 2020, voters elected Joe Biden primarily because he was not Donald Trump. But Democrats’ constrained expectations had expanded over the course of the campaign; rather than looking like a caretaker whose primary purpose was to excise the Trump tumor, Biden displayed a surprising degree of policy ambition. Their hopes for the Biden presidency began to rise.