Harvard-bound high school graduate turns down $40,000 and asks for it to be given to student going to community college

By Gustaf Kilander
Posted by
The Independent
12 days ago 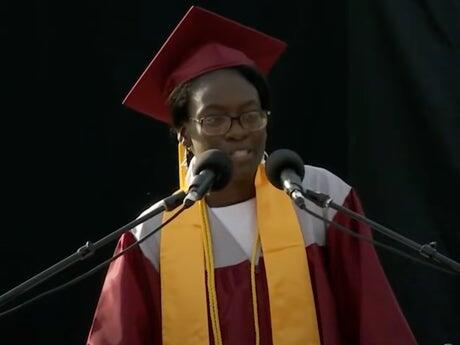 A high school graduate about to go to Harvard turned down a $40,000 “General Excellence” award from her school and asked for it to be given to a student going to community college.

Verda Tetteh, 17, told more than 200 of her fellow seniors at Fitchburg High School in Fitchburg, Massachusetts during her graduation speech: “If we’re being honest with ourselves, some of us were born with the odds stacked against us.”

Most students at the school are considered to be “economically disadvantaged”.

With tears in her eyes, she said: “To every immigrant child, you can make it.” Ms Tetteh, whose family is from Ghana, earned a state scholarship and got into Harvard as she worked at a grocery store during the Covid-19 pandemic.

After her speech during her graduation ceremony last Friday, she was given the “General Excellence” award, her school’s highest honour.

Towards the end of the ceremony, after school leaders had spoken, Ms Tetteh walked up to the mic once again to deliver some unprepared remarks.

She noted that she had been listening to school leaders speak about “being selfless and being bold”. She said that she hoped the school administration would consider giving the $40,000 to someone going to community college, such as the school that had helped her mother.

“I am so very grateful for this, but I also know that I am not the one who needs this the most,” she said, receiving her second standing ovation from classmates.

“She represented the class and the school amazingly well, and I would even dare say, her generation,” he added.

Ms Tetteh, who was born in the UK before coming to the US as a child, had applied for the award but told CNN that she thought it would “automatically go to someone who needed it more, so I had ruled myself out”.

“Then I sat down, and it hit me. This is $40,000. That’s a lot of money. Obviously, I could use that,” she said. “But there’s definitely someone sitting in this crowd who needs it more.”

The family of Ms Tetteh have said that she has received significant scholarships and financial aid to assist her college ambitions.

But the school award of $10,000 for up to four years could have been used however she wanted, not just to pay for tuition or education-related expenses, according to Mr Roche. He added that the school is going to honour Ms Tetteh’s wish for the funds.

“I just knew she’s ready for me to let her be on her own,” Ms Tetteh’s mother, Rosemary Annan, told CNN . “I’m not afraid, and I’m not sad about it that someone’s going to get some good help. If I had gotten that help, I would have been thrilled.”

Ms Tetteh’s stepfather, Leslie Barnor, said that she often came home from her job after 9pm during the pandemic, instantly starting her schoolwork, and at times using her phone as a flashlight as her family tried to get her to go to bed, The Washington Post reported.

The family couldn’t initially hear that Ms Tetteh had given the money away, but they were then filled in by those sitting around them as people applauded. Ms Tetteh later said it was a split-second decision.

“We are a Christian family,” Mr Barnor told The Post. “We believe we don’t need to have so much before you give to others.”

While Ms Tetteh getting into Harvard was “like a dream come true”, Mr Barnor added that it was “not just a dream... It was hard work. She worked hard for these achievements”.

“When she started speaking on the microphone, I was overwhelmed. I think a lot of people in the stadium were, honestly,” Mr Roche told CNN . “I was so moved by her generosity.”

Ms Tetteh told The Boston Globe that she felt a sense of relief after choosing to give away her award money. She credited her faith and the example of her mother, who earned her bachelor’s degree at 47. She wanted other students to be able to carry on with their education without having to worry about money.

At Harvard, she plans to study chemistry on a pre-med track.

(CNN) — Devarius Peters wanted to celebrate graduation day wearing a pair of Black leather Alexander McQueen shoes. Ashley Saucedo and Ever Lopez, both graduates of different schools in different states, wanted to carry the Mexican flag to honor their roots. But for all three students, their plans were thwarted...

A high school principal was kicked out of a graduation ceremony for what he told his students. “I was kicked out for one reason. I truly love you and this community,” Principal Ben Nakamura of Stagg High School in Stockton, California said during his speech. Nakamura revealed in the speech...

Alexis Hawkins, a student expelled from a Washington, D.C. high school as a teen, is now graduating from Howard University School of Law. “I just had to keep believing in myself, stay focused and not give up on my goals,” the 28-year-old told The Washington Post. The HBCU graduate was...

Last week, Bartram Trail High School in St. Johns, Fla., a public school about a 30-minute drive from Jacksonville, released its yearbook, and Riley O’Keefe was eager to see her photo. The 15-year-old freshman immediately noticed something was amiss. Riley initially laughed off the picture, which had been altered to...

A Massachusetts high school senior made a request for her school to give her $40K scholarship to a community college student during her commencement address.

(CNN) — A high school in Maryland held a special ceremony to finally give seven students their diplomas 52 years after they graduated. Some students from the class of 1969 at La Plata High School were punished for being part of a sit-in that occurred the same year. "The graduation...

A high school senior headed to Harvard asked that her school give the $40,000 college scholarship it had awarded her to someone going to a community college instead. At the graduation ceremony at Fitchburg High School on Friday, Verda Tetteh returned to the stage to ask that the school give its General Excellence Award scholarship to another student or students going to a community college.

An apparent dress code violation has prevented a North Carolina student from getting his diploma -- at least temporarily. But this incident, where the teenager wore a Mexican flag, has some in the community upset. It was a day to celebrate a milestone -- graduation from Asheboro High School, for...

Devarius Peters wanted to celebrate graduation day wearing a pair of Black leather Alexander McQueen shoes. Ashley Saucedo and Ever Lopez, both graduates of different schools in different states, wanted to carry the Mexican flag to honor their roots. But for all three students, their plans were thwarted by school...

Photos a recent California college graduate took with her parents in the fields where they worked as migrant farm laborers went viral this week, after her school shared the images and the story of her journey on their Facebook page. Jessica Rocha graduated from the University of California, San Diego,...

The sudden death of a transgender student at Claremont High School has not only shaken students and staff members, but is also causing frustration in the LGBTQ community over the decision by the school district to use the name the student was born with, as opposed to the name the student had chosen.

After a petition garnered more than 21,000 signatures on his behalf, a transgender student at Pope High School had his preferred name read as he crossed the stage at graduation. As he made his way across the stage at McEachern High School’s Cantrell Stadium during graduation ceremonies on Wednesday night,...

A petition calling for the resignation of the superintendent of a New Hampshire high school, which recently came under fire after branding its unvaccinated students with a marker during their prom, has close to half of its needed signatures. Parents of some students in New Hampshire's School Administrative Unit 16...

Eli and Zack Verdin have always been together. The twins graduated from Travelers Rest High School in South Carolina with honors on Wednesday. Both gave speeches. Because both were graduating at the top of their class. “I just graduated salutatorian. It feels... I don’t know, it feels good but, I...

A Ghanaian lady heading to the prestigious Harvard University in the United States is being celebrated for donating a financial scholarship that she won from High School to a community school. Transiting from Fitchburg High School to the university, Verda Tetteh could has added $40,000 to her financial aid packet...