By Olafimihan Oshin
Posted by
The Hill
11 days ago 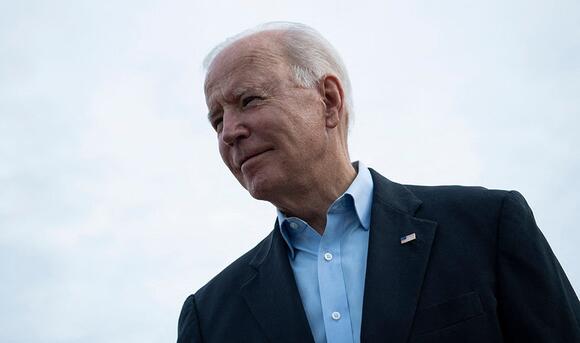 More than 21,000 people have signed a letter calling for U.S. Catholic bishops to cancel a planned vote on whether President Biden should receive communion.

Biden, a Catholic, supports abortion rights and has long come under attack from some Catholics over that position. The vote is set to take place next week at a meeting of the U.S. Conference of Catholic Bishops.

The petition, organized by Faithful America, argued that the receiving of communion was being weaponized through the vote against Biden and congressional leaders who support abortion rights.

"Pope Francis is clear that mercy, welcome, and pastoral sensitivity should be hallmarks of the church. Follow his pastoral example and listen to your brothers Cardinal Gregory and Bishop McElroy: Stop playing partisan politics with Holy Communion and cancel your planned anti-Biden vote," the petition reads.

"As a practicing Catholic, I find it absolutely unconscionable that Communion would be weaponized in this way against President Biden,” Micheal Vezzali, one of the Christians who signed the petition, said in the statement. “Where were these bishops during the horrors committed by the previous administration and the sickening ways it misappropriated Christianity? Thank you to Cardinal Gregory, Bishop McElroy, and others who are standing up for what is good and right."

Separately, the group highlighted a letter organized by Washington Archbishop Wilton Cardinal Gregory in which 67 bishops offered their opposition to the vote, which they labeled an attempt to undermine Biden and prop up former President Trump .

Co-host of ABC's “The View” Meghan McCain on Monday said President Biden is walking a "fine line" between personal religious beliefs and political policy relative to the issue of abortion as the Catholic Church is set to consider whether to allow him to receive communion over the issue. "When it...

Congressman Launches Attack on Catholic Bishops: ‘Next Time I Go to Church, I Dare You to Deny Me Communion’

(CNSNew.com) - Rep. Ted Lieu (D.-Calif.), who professes to be a Catholic, sent out a series of tweets last week attacking the Catholic bishops of the United States for the church’s moral positions on issues ranging from abortion to same-sex marriage. “Next time I go to Church, I dare you...

US Catholics need a crash course in Church teaching on Communion. Biden gave an opening.

What the Catholic Church believes might sound bizarre. But once you accept the teaching, then the debate over receiving Communion makes more sense.

American bishops seek to deny Biden Communion: 'We've never had a situation like this'

The Roman Catholic bishops of the U.S. voted on Friday to begin drafting new guidance that could deny President Biden and other pro-choice public officials Communion due to their support of abortion rights, placing Biden at the center of a political and religious clash. The draft document will define the...

Critics slammed The New York Times for a piece claiming Pope Francis was "liberal" and that the Catholic Church was being further polarized by a conservative movement at odds with Vatican leadership. The report on a vote by the U.S. Conference of Catholic Bishops (USCCB) to advance a push by...

White House press secretary Jen Psaki on Monday said President Biden will likely "continue to attend church" despite efforts by U.S. Catholic bishops to prevent him and other politicians who support abortion policies from receiving Communion at Mass. The U.S. Conference of Catholic Bishops (USCCB) last week voted overwhelmingly to...

Prominent evangelical Christian leader Franklin Graham once again urged hesitant Americans to get vaccinated against COVID-19, warning that the pandemic is "not over" and that the novel coronavirus "could kill you." Polling has shown that evangelical Christians are among the demographics most skeptical about the efficacy and safety of COVID-19...

(CNN) — Republicans justify their plan to block sweeping voting rights legislation in the Senate this week by arguing that it's a huge federal power grab. But their past words and actions suggest they are again prioritizing their own political advantage over defending democracy. When former President Donald Trump lost...

Roughly one-third of Americans believe that President Biden ’s 2020 electoral victory was the result of widespread voter fraud, according to a new Monmouth University poll. Thirty-two percent of respondents say fraud was the reason Biden won the presidential election, maintaining a trend that has taken hold over the past seven months.

The president of the U.S. Conference of Catholic Bishops late Monday appeared to waver on what a teaching document on the Holy Communion — voted on last week by the group’s members with a draft due in November — will say about whether Catholic politicians such as President Biden, who support abortion rights, can receive the sacrament.

White House press secretary Jen Psaki said Monday that President Biden expects Congress to lift the legal limit on the federal debt despite a looming battle with Republicans over spending. During a Monday White House briefing, Psaki told reporters that Biden believes lawmakers will once again prevent the U.S. from...

The U.S. Conference of Catholic Bishops is moving to rebuke Biden and other Catholic politicians who support abortion rights.

Some members of the U.S. Conference of Catholic Bishops don't think so. The bishops recently voted 168-55 to draft "a formal statement on the meaning of the Eucharist in the life of the Church." It raises the possibility that the church may deny the president Communion because of his abhorrent...

In trying to pressure Biden, the Catholic bishops forget the lessons of JFK

In September 1960, Democratic presidential candidate John F. Kennedy, against the advice of his political consultants, confronted anti-Catholic bigotry head-on in an extraordinary speech before a hostile audience of several hundred Protestant ministers in Houston. This was days after another group of Protestant clergy, representing 37 denominations and presided over...

President Biden views Sen. Joe Manchin 's (D-W.Va.) compromise proposal on voting rights to be a "step forward," even as it is unlikely to garner any Republican support ahead of a critical Senate vote on the issue this week. The Senate is set to vote Tuesday on a sweeping bill...

Republican Sens. Mitt Romney (Utah) and Josh Hawley (Mo.) — who certainly did not find common ground on another recent issue — Marco Rubio and others are seeking ways to address family poverty and its impact on family stability. Many Hill Democrats and the Biden administration have the same aim. The drive to reduce or eliminate child poverty is not limited to the Congress and the White House. Mayors for a Guaranteed Income has formed, with mayors across the country from Eric Garcetti of Los Angeles, to Levar Stoney of Richmond, Va., finding funding for experiments in their jurisdictions with a guaranteed family income.

The Memo: The center strikes back

The political center is striking back — at least for now. Sen. Joe Manchin (D-W.Va.) has become the most influential member of the Senate, occupying a perch from which he is able to mute his own party’s most ambitious goals. Former Virginia Gov. Terry McAuliffe (D), an avatar of Clinton-era...

Democratic Rep. Ted Lieu tweeted his support of a series of sins like abortion, divorce and same-sex marriage before daring the United States Conference of Catholic bishops to deny him Holy Communion. “Dear @USCCB: I’m Catholic and I support: Contraception, A woman’s right to choose, Treatments for infertility, The right for people to get a…

The American Catholic bishops have overwhelmingly voted to draft a document that could lead to the denial of the sacrament of Holy Communion to President Joe Biden, a Catholic, and other Catholic politicians who publicly advocate for abortion. The question of denying Communion has been a fraught one in politics...