By Gino Spocchia
Posted by
The Independent
12 days ago 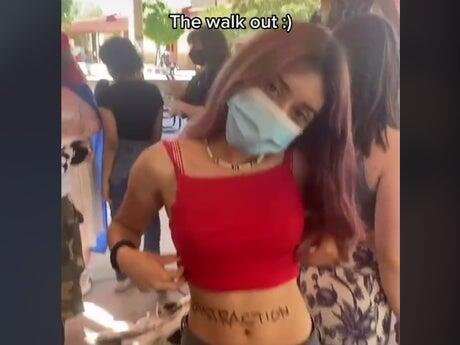 A group of high school students in California have gone viral after walking out of lessons in protest at a “sexist” dress code.

In a protest on 3 June, the students allegedly walked out of school after the principal called an assembly on dress code, and girls showing “too much midriff”.

It was put together by teenager Evita Frick-Hisaw, who shared images of the protest to TikTok and Instagram , where she discussed the issue in a series of videos.

The teen argued in a TikTok video her school’s dress code “is sexist towards women and perpetuates rape culture. It makes us very uncomfortable”.

“We as students feel like what we wear is not distracting towards others or affecting anyone’s learning environment, she continued, “we should not be kicked out of school for wearing a crop top”.

Students, who were filmed wearing crop-tops for the protest, also covered the school’s hallways with posters reading “If children’s midriff’s distract you, you shouldn’t be working with children”.

She wrote in a caption: “Our body our choice, it isn’t our fault they’re distracted. They can’t take away our confidence and self expression”.

All students were encouraged to take part in the walk out, with some male students seen in images wearing crop tops in protest at the “sexist” policy.

The students were from the performing arts academy of Natomas Charter School in Sacramento, California.

Joe Wood, the executive director of Natomas, told The Independent that the school’s dress code “is intentionally gender neutral” and that “many of them had not read our dress code”.

The school has since held meetings with the students involved in the walk out, with Mr Woods adding that his focus was on the “emotional health” of Natomas students during Covid.

Over 3 million people have since watched Evitaa’s TikTok protest video.

Jacksonville black mom torches school policy: “Teaching a child that they are permanently oppressed is racist”

Keisha King, a Jacksonville black mom, has gone viral for her disparaging remarks against critical race theory in schools. The outraged mother spoke out against the Board of Education recently, insisting that critical race theory is promoted only by people who “are racists themselves,” as noted by The Blaze.

Schoolgirls across the country have been advised by their teachers to wear shorts under their skirts to prevent upskirting, MPs have heard. Ofsted’s chief inspector Amanda Spielman warned against a culture of “victim blaming” and said that schools needed to find long-term solutions in addressing problems that could be making school children feel “uncomfortable” when doing somersaults or cartwheels in the playground.

A five-year-old Sikh boy has had his sacred hair cut with scissors by another pupil at his school in southeast London, sparking outrage from his family and community groups. Many Sikhs follow the practice of "kesh"—allowing one's hair to grow naturally out of respect for God's creation. The boy, a pupil at Alexandra McLeod Primary School in the suburb of Abbey Wood, had never before had his hair cut, reported News Shopper.

Male teachers in Spain are wearing skirts to the classroom to fight gender stereotypes.Teachers across the country have joined the Clothes Have No Gender (#laropanotienegenero) movement, after a boy was expelled for wearing a skirt to school last year.Manuel Ortega is among the latest to join the cause, and has been wearing a skirt to class since May. He tweeted: “A school that educates with respect, diversity, co-education and tolerance. Dress how you want! We join the campaign #clotheshavenogender.”Meanwhile teacher Jose Piñas wrote of his decision to wear a skirt: “20 years ago I suffered persecution and insults for my...

Commentary: Teacher on Leave After Refusing To Lie to Students, Defying School Board on Gender Affirmation

Tanner Cross, a physical education teacher at an elementary school in Virginia, doesn’t believe “a biological boy can be a girl and vice versa.”. I know the fact people hold this opinion might shock some people. Those people often work in media and split their time between metro areas of New York, Los Angeles and Washington, D.C. When Donald Trump won the presidency back in 2016, they tried to understand what had happened by buying a copy of “Hillbilly Elegy,” but gave up after 50 pages.

LEWISTON, Maine — A new proposal would change Lewiston Middle School's dress code to allow students to wear hats and hoods inside. A group of classmates researched the current policy. They found punishments for violations were disproportionately given to students of color. Lewiston Superintendent Jake Langlais said the proposal is...

‘We are teaching them to live in fear.’ Parents hold rally to protest mask-wearing in school

A group of parents held a rally outside the Point Pleasant Board of Education building to protest the fact that their children must wear masks in school. “We are teaching them to live in fear,” says parent Nicole Capoano. Gov. Phil Murphy announced on Monday that New Jersey’s indoor mask...

Mom fights anti-White training in daughter’s kindergarten class: ‘They reduce everything down’ to skin color

Rhode Island mother Nicole Solas is taking action against her daughter’s school district for refusing to share information on race theory-based curriculum. Solas joined "Tucker Carlson Tonight" on Thursday to express her frustration with district management, and shared that school guidelines bar teachers from calling their students "boys and girls" and rethinks the American foundations of Thanksgiving.

Students at a Florida middle school were caught on video last week viciously beating up and taunting at a 13-year-old trans girl.According to Chad Sanford, an older student began following her on Friday afternoon at Deerfield Beach Middle School, before a crowd formed and a student threw her to the ground with a horrifying smack.“He called me a gay f—t,” Ms Sanford told a local NBC affiliate. “He said he was going to knock the gayness out of me. Why does my sexual orientation have to do with you not liking me? Just leave me alone. I don’t want to...

Last week, Bartram Trail High School in St. Johns, Fla., a public school about a 30-minute drive from Jacksonville, released its yearbook, and Riley O'Keefe was eager to see her photo. The 15-year-old freshman immediately noticed something was amiss. O'Keefe initially laughed off the picture, which had been altered to...

This Maine School May Change Dress Code to Allow Hats/Hoods

I remember being a kid in school and the only times we were allowed to wear hats and hoods inside was when we were having a 'dress-down day', or an in-school fundraiser where you would pay a dollar to the cause and in exchange could wear your ballcap or hood up for the day. Otherwise, the normal dress-code wouldn't allow it.

A North Carolina high school student was denied his diploma after wearing a Mexican flag over his graduation gown during the school's graduation ceremony. In a statement, the school district said students were told ahead of time that wearing a flag of any kind would be a dress code violation.

A graduating senior from North Carolina, Ever Lopez, finally got his diploma after initially being denied his diploma for wearing a Mexican flag over his graduation gown. The incident was filmed by his cousin during the ceremony and uploaded on TikTok, where it had gone viral on the internet. A faculty member stopped Lopez from collecting his diploma as he walked down the stage at Asheboro High School. The 18-year-old received his diploma on Monday and held it up in his hands as he walked out of school to a small gathering of people waiting for him, reported ABC13 News. He was handed the diploma shortly after his family held a press conference during which they said they were "humiliated" when they were escorted out of the school by police officers.

Unvaccinated teenagers at a high school prom had numbers written on their hands with marker, a practice that drew criticism from some parents. The prom was held June 4 outside at Exeter High School in New Hampshire, but the ongoing COVID-19 pandemic was still a concern. "The prom happened Friday...

Poverty thwarts teen mothers from benefiting from return-to-school policy. If you're in a slum, you have to work because there is nobody to take care of the child.

America has arrived at the next stage in Cancel Culture, a stage where we eat our young: An underage youth in Connecticut has been arrested for racial slurs. According to the Hartford Courant, a 16-year-old white boy was charged by the Fairfield Police Department with “breach of peace,” in addition to an older-than-dirt Connecticut misdemeanor of “ridicule on account of creed, religion, color, denomination, nationality or race.” Hate speech on Snapchat is now punishable by up to 30 days in jail in Connecticut.

An open letter from AAPI high school students in Massachusetts begins with a simple statement: “We are high school students from Boston, Malden, and Quincy, members of the Boston Chinatown Neighborhood Center (BCNC) Youth Center. We ask educators and superintendents to address the surge of anti-Asian racism that followed the COVID-19 outbreak.”

'Clothes Have No Gender:' Male Teachers in Spain Wear Skirts to Support Boy Who Was Expelled for Wearing One

SPOKANE, Wash. -- A Washington state family is calling for the removal of a school administrator whose suggestion was to separate two Black students after their mom raised concerns about a classroom assignment the students say involved cleaning cotton. Twins Emzayia and Zyeshauwne Feazell said they were in their social...