The difference between Melania Trump and Jill Biden in one photo

By Sinead Butler
Posted by
Indy100
13 days ago 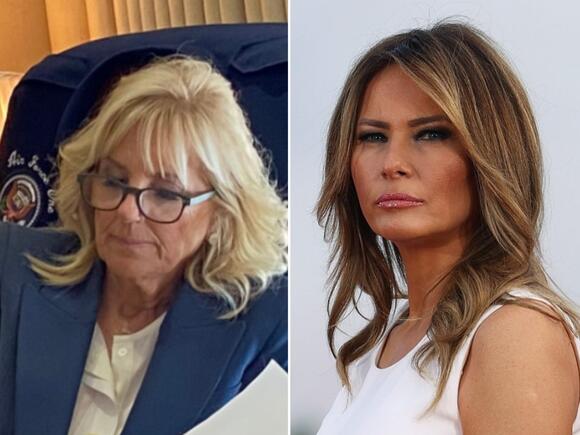 A photo of first lady, Jill Biden has caused people online to compare her to her predecessor, Melania Trump.

On her FLOTUS Twitter account, Dr. Biden tweeted an image of herself at her desk, appearing to be intensely studying a large binder of paperwork ahead of the G7 Summit.

The G7 (Group of Seven) is a summit where several world leaders - from France, Germany, Italy, Japan, the UK and the United States - discuss the biggest issues of the day.

This year, the summit is being held in Cornwall, on the south coast of the UK.

As a result of the photo, people are making comparisons between Dr. Biden and former First Lady, Melania Trump.

Many praised First Lady Biden for doing some extracurricular work outside of her duties, while also mocking Melania and accusing her of making the same commitment to the role.

Meanwhile, conservatives were not impressed with the photo and accused Dr. Biden of overstepping her role and ridiculing her husband for allowing her to do so.

Elsewhere, people were reminding everyone of First Lady Biden’s impressive qualifications and noted how this would help her prep for the summit.

She earned a doctorate degree in Education at The University of Delaware in 2007.

So, what will first lady Biden be doing during the summit?

Jill Biden is accompanying president Biden for four days of the overseas trip. She will participate in G7 activities - including a dinner hosted by the Royal Family on Friday.

After landing in the UK on Wednesday, the President and First Lady will meet UK Prime Minister Boris Johnson and his wife, Carrie Symonds for the first time today.

The first lady and Carrie Johnson will then meet separately for tea and tour St. Michael’s Mount off the coast of Cornwall.

Ivanka Trump and her husband, Jared Kushner , have been distancing themselves from former President Trump 's claims about the 2020 election, 12 former Trump White House and administration officials, family friends, acquaintances and members of Trump's team told CNN. The sources noted Ivanka Trump and Kushner were not around...

Eric Trump has claimed President Joe Biden's "incompetence" is making his father's decision to run for the presidency in 2024 easier. In an appearance on conservative news network Newsmax, Eric Trump Trump suggested former president Donald Trump would easily defeat Biden in the next presidential election. "What's the latest on...

The utter predictability of Jared and Ivanka ghosting Donald Trump

(CNN) — Here's the paragraph you need to read today:. "With each passing day away from Washington, former President Donald Trump's grievances continue unabated. And those complaints appear to be driving away two of the people who were closest to him during his White House tenure: his daughter Ivanka Trump and son-in-law, Jared Kushner."

Trump has ‘zero desire’ to be speaker, spokesperson says

Former President Donald Trump had left the door on becoming speaker of the House open, but his spokesman shut that scenario down. Jason Miller, the former president’s outgoing spokesman, said Trump “has zero desire to be speaker." Prior to Miller’s pushback, the former commander in chief called the possibility of becoming the next speaker, should Republicans take back the majority in 2022, “so interesting.”

“The View” host Joy Behar seemingly took a dig at her conservative colleague Meghan McCain by implying there’s hypocrisy among those who favor the death penalty and oppose abortion rights. Behar’s passive-aggressive comments Monday came during a segment in which each panel member of the talk show delivers a monologue...

Georgia Republican Congressperson Marjorie Taylor Greene says she is proud to have signed a letter to President Joe Biden urging him to replace Vice President Kamala Harris in her role controlling illegal immigration at the U.S. border. The Trump loyalist, together with 56 GOP lawmakers, wrote to Biden on June...

President Biden is reportedly planning on hosting a White House ceremony for the unveiling of former President Obama's presidential portrait, a tradition former President Trump had declined to take part in. Sources close to the matter told NBC News that Biden will likely hold the event for both Michelle and...

The White House on Saturday announced the death of Champ, one of President Joe Biden's dogs. Mr. Biden and first lady Jill Biden said in a statement that the 13-year-old German Shepherd "passed away peacefully at home." "He was our constant, cherished companion during the last 13 years and was...

Former President Donald Trump on Monday said that he could still be in office if Mike Pence had refused to certify President Joe Biden's election win. On January 6, Pence declined Trump's demand that he block the certification by Congress of Biden's election as the 46th U.S. president. In a three-page letter to congressional members, the then-vice president said that he didn't share Trump's belief that he possessed the power to reject Electoral College votes.

Trump wishes a happy Father’s Day to ‘losers’ and ‘RINOs’

Former President Donald Trump on Sunday sent a Father’s Day message to his political adversaries — whom he blasted as “losers” — and said he hoped US residents across the political spectrum could “come together.”. Trump, who is banned from Twitter and Facebook, released the statement through his political action...

US President Joe Biden and First Lady Jill Biden have announced the death of their "beloved" German Shepherd Champ, who had been with them for 13 years. "Our family lost our loving companion Champ today. I will miss him," President Biden wrote on Twitter. Champ was one of two German...

Trump World's latest crazy idea could be good for Democrats

(CNN) — Close your eyes and picture this come January 2023. "Speaker of the House: Donald J. Trump." If you are like most Americans, the thought of Trump -- the man who incited an act of "domestic terrorism," as FBI Director Christopher Wray has defined the Jan. 6 attack on the Capitol -- as speaker is both appalling and alarming.

Joe Biden wooed many on his tour of Europe. It'll take much more to fix the damage wrought by Trump

(CNN) — Joe Biden's first overseas trip as US President -- a whistle-stop diplomatic tour of Europe -- achieved its primary goal of signaling to America's closest friends that it was ready once more to lead the Western alliance. Yet, while European leaders were delighted to see a US President...

WASHINGTON — A modern presidential tradition is poised to return to the White House — at least in part. President Joe Biden plans to host a White House ceremony this year for the unveiling of former President Barack Obama’s official portrait, according to people familiar with the discussions. And former President Donald Trump has already begun participating in the customary process so his official portrait can eventually hang alongside his predecessors, according to an aide and others familiar with the discussions.

WASHINGTON (AP) — President Joe Biden spent his first trip overseas highlighting a sharp break from his disruptive predecessor, selling that the United States was once more a reliable ally with a steady hand at the wheel. European allies welcomed the pitch — and even a longtime foe acknowledged it.