Posted by
Angela Kervorkian-Wattle
2 days ago 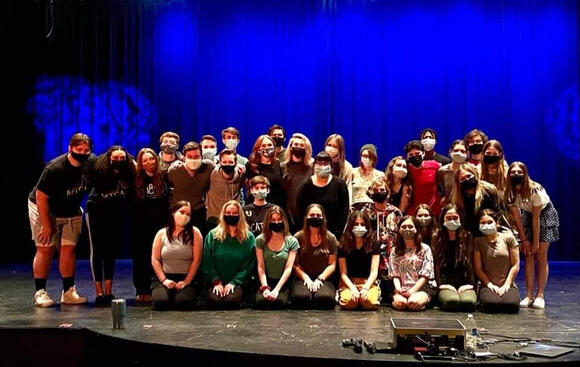 This year’s tournament was held virtually, with groups competing on the internet from all over the United States. Children from grades 6 through 12 had participated in the Junior Company, a performance project involving kids from 19 different schools.

They received third place in the Advanced Ensemble Production category for their portrayal of Stephen Sondheim’s masterpiece ‘Merrily We Roll Along’. They were also declared the third-place winner of the Advanced Musical Revue in the category of their original revue, ‘What If: The Music and Lyrics of Tom Kitt and Brian Yorkey’.

It was also announced that the Junior Company’s senior vocalist, Emma Grace (EG) Canzano, was awarded first place in senior vocal performance for her rendition of ‘I’d Rather Be Me’ from ‘Mean Girls: The Musical’.

A student who is a current Shining Star CLE 2020 recipient, Ethan Peterson, won Second Place in Senior Vocal Performance. He was also selected to take part in a masterclass with Broadway veteran Christopher Hanke.

The Junior Company of Mercury Theatre Company is dedicated to helping students become ready for a performing arts career. It has been in operation for the past five years.

This audition-based program, directed by Mercury Theatre Company Artistic Director Pierre Brault and Education Director Aubrey Fink, provides students with the chance to perform and develop their craft while being instructed by a team of industry veterans.

This is the Junior Company’s second national recognition in 2021, following their award-winning production of Disney’s High School Musical Jr. at iTheatrics’ Junior Theatre Festival in January. They received Excellence in Dance award for the production, and company member Ethan Peterson’s All Festival Individual Performance also received an award.

Please visit www.mercurytheatrecompany.org for details about the Junior Company’s upcoming production or auditions.

CLEVELAND — The Regional, the first major multi-museum survey devoted to Midwestern contemporary artists, will be launched in December 2021. The first museum to be visited is the Contemporary Arts Center (CAC), Cincinnati. The exhibition will travel from Cincinnati through Kansas City from December 10, 2021, through September 11, 2021.

CLEVELAND — The Center for Arts-Inspired Learning, or CAL, announced on Friday that Sheffia Randall Dooley had been appointed as the new CEO and President of the organization. Dooley will assume responsibilities on July 1.

EUCLID, CLEVELAND — Looking for fun activities to do with kids and family from your home? Mark your calendar as we have listed all that is interesting to do, courtesy of the Euclid Public Library, starting today.

LAKEWOOD, CLEVELAND — This month, Western Reserve Distillery plans to hold the 'Couples Mixology 101' — A hands-on class presented to help participants create cocktails in their own homes and utilize easy-to-find ingredients from a local grocery store.

Yisa Guo/UnsplashCLEVELAND — Cleveland Botanical Garden is holding various summer camps throughout this month. And if your curious little ones are interested in flora and fauna, the garden’s Habitat Hunter might be the perfect event for them.

CLEVELAND — Greetings, Clevelanders! Cleveland is not the land of the scorching sun and sand dunes that is the Middle East. However, in the desert of fast-food chains that calls itself Cleveland, we can find oases of Middle Eastern delicacies. Lucky for you that you don’t have to look hard for them. Let’s go!

To celebrate Juneteenth this year, why not support Cleveland's own local Black-owned restaurants? Here are our picks of five delicious restaurants in the Cleveland area that you can dine in or order take-out from, ranging from Caribbean, Jamaican, to Southern foods.

TALLMADGE, AKRON — The Greater Akron Aquarium Society, or GAAS, will be hosting its monthly Swap Meet on Saturday, June 12, where sellers, buyers, and enthusiasts can meet and purchase fish directly.

Why Jasmine Home is the Best Asian Restaurant in Akron

AKRON — Akron is one of the most diverse cities in the United States. You can find a lot of thriving communities of various backgrounds that call Akron home. This melting pot is bound to create a fusion restaurant or two, and one of them is the humble Jasmine Home Cooking.

AKRON - Who doesn’t enjoy reading classic books? Everyone loves them, and we believe you, too. If you do, chances are you will enjoy the modern twists in these top four of the classic book makeovers recommended by Akron-Summit County Public Library. Also, it’s summer; the perfect time to visit and read them at your favorite library in town!

There's nothing better than a plate of juicy Korean barbecue meat with a side of fresh kimchi. But hold your tongs, because Korean cuisine has a lot more to offer if you know where to look! Here's a list of the top five Korean restaurants you must try in Cleveland.

Kings of Leon coming to Blossom Music Center this summer

CUYAHOGA FALLS, Ohio -- Kings of Leon will hit the road this summer and fall for a world tour, which will stop by Blossom Music Center for a show on Aug. 19. It’s the latest concert announcement for Blossom Music Center, which has been adding to its summer and fall schedules regularly in the past few weeks, following a year of closure due to the coronavirus pandemic.

Crocker Park has released its summer event calendar, featuring annual activities, daily programs and new event additions. “We are thrilled to be back in the swing of things, with a full line up of fun programs and events running all season long, all while staying safe, here at Crocker Park,” Stacie Schmidt, vice president of marketing and communications for Stark Enterprises in Cleveland, said in a news release. “We are especially excited to roll out our 1st annual Crocker Bark 5K and Crocker Block Party on June 13, bringing a community party to Main Street for the whole family. It’s all happening here - all Summer long.”

The Karamu House, the oldest African American Theater in the United States, is observing the 100-year anniversary of the Tulsa Race Massacre, also known as the Black Wall Street Massacre, with “Still We Rise,” a virtual benefit held on Thursday, June 3 at 6 p.m. EDT.

A high-level game of tag is coming to Northeast Ohio. Write us: Crain's welcomes responses from readers. Letters should be as brief as possible and may be edited. Send letters to Crain's Cleveland Business, 700 West. St. Clair Avenue, Suite 310, Cleveland, Ohio, 44113, or by emailing ClevEdit@crain.com.

CLEVELAND, Ohio -- After 20 years together, Dan Auerbach and Patrick Carney like to have things “sneak up on us” for the Black Keys. And that’s exactly what happened with the Akron-formed duo’s new album, “Delta Kream.”. The just-released 11-song set -- which features versions of Mississippi Hill Country blues...

Tips for watching the Spring Bird Migration from Cleveland Metroparks

Did you know that millions of migrating songbirds from Central and South America make a brief stop in Cleveland every Spring?. Jen Brumfield is a Naturalist with the Cleveland Metroparks and she fills in Fox 8's Todd Meany and Natalie Herbick on what you need to know to enjoy the Spring migration in this edition of Cleveland Metroparks Monday.

CLEVELAND — Ohio celebrated American Craft Beer Week with a special beer on tap called “From the Heart.”. “It's a nice beer. It's good and clean, easy drinker. It's a good one,” said Mike Piazza, head brewer at Blue Heron Brewery and Event Center in Medina. “It was a straightforward American IPA. We put a lot of the hop in late and kept the bitterness a little bit lower. So some of that rye could shine and it does it. It came through in the finish and it came out really well balanced and it turned out to be a great beer.”

BEREA, Ohio — Editor's note: The video in the player above is from a story published on May 12, 2021. Organizers for the annual Berea National Rib Cook-Off & Beer Fest have announced that the iconic Northeast Ohio event will return this Memorial Day weekend, after a year away due to the COVID-19 pandemic.