'It was 9 cars in a row': Rash of car break-ins targets SF's Union Square garage 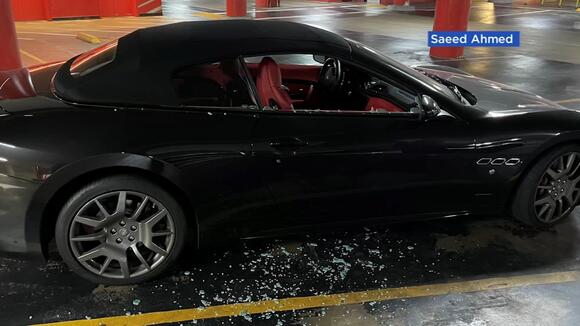 A Fremont family visits San Francisco's Union Square for the first time since the pandemic began only to return to their car windows smashed. Call it bad luck, or the price of parking in San Francisco. "It was a horrific experience for us," said Basil Yaqub, staring at pictures of his smashed Maserati. RELATED: Security cut at half the major parking garages in SF amid uptick in car break-ins Yaqub is one of 6,911 other auto burglary cases reported across the city this year, which is only a one-percent decrease from this time last year. "Everyone came back screaming," said Saeed Ahmed, who came back to see his Lamborghini smashed in the Union Square St. garage Saturday night. "It wasn't just us, there were eight or nine other cars that all got hit at the same time." Police say the problem is getting worse in the city's central district where auto burglaries have more than doubled. EXCLUSIVE: SF mom robbed at gunpoint in own garage with husband asleep, kids in car

A San Francisco family was robbed at gunpoint inside their garage with their two children in the backseat coming home from a family dinner.

In an effort to cut costs, the city also cut all security services at half of the high-volume parking garages in San Francisco - including the Union Square street parking garage. The ABC7 I-Team asked SFMTA if any of the security service contracts would be reinstated ahead of the economy reopening, but was told the agency's previous statement still stands citing low crime at the facilities. "Eight alarms must have went off and no one did anything," Ahmed said. "They need to have actual security here." The I-Team received this statement from the agency last month: "Parking at any of our 22 city-owned facilities is safer than ever. Last month we completed the Parking Access Revenue and Control Systems (PARCS) project to replace aging parking equipment with modern technology and significant operational upgrades. Our patrons will notice enhanced lighting, new wayfinding signs, audible alarms, cameras, gate arms, and payment machines with two-way digital intercoms. Additionally, behind the scenes is an all-new parking management system and 24/7 command center, connected to every machine." Former SFPD Deputy Chief Garret Tom used to oversee patrol operations at in the city's central district. He says some of the organized crime rings involved four to six people that would target at least 10 cars per day. EXCLUSIVE: Senior couple's life savings stolen in brazen SF burglary "It's very important to have security there," he said. "Just having cameras doesn't mean there will be an arrest, let alone an actual prosecution." According to Tom, back in the 80s, the police department had a Patrol Bureau Taskforce that at one point had 100 officers dedicated only to focusing on car break-ins. A luxury the department can't afford now, struggling with a major staffing shortage. So what is being done? SFPD Deputy Chief David Lazar says the department is working to add additional officers in high traffic areas to help curb some of the crime. In addition officers are baiting cars, which is a police tactic that is used to help catch criminals in the act.
View All 29 Comments