Posted by
Marisol Gallagher
4 days ago 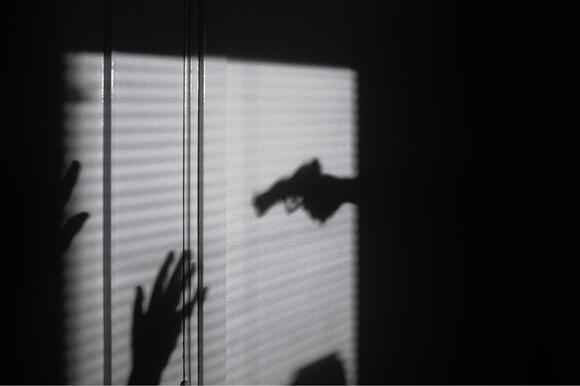 Maxim Hopman/Unsplash
HOUSTON — The third suspect in the fatal shooting at 6311 Beverly Hill Street, Cedrick Fobbs, has been charged with murder in the 184th State District Court.

Two other suspects, Maya Muhammad (20) and Deerian Caraway (27), are also charged with murder. All three suspects are allegedly responsible for the death of 46-year-old Patrick Aikens, who died at the scene after being shot multiple times.

Houston Police Department Homicide Division Detectives P. Pak and C. Flora reported that patrol officers had responded to a shooting in front of the main office at an apartment at the address above. After arriving at the location, the officers met Houston Fire Department paramedics, who had already pronounced the victim deceased. He passed away after suffering multiple gunshot wounds to his head and chest.

Police investigators explained that Aikens met with an unknown suspect, who arrived in a newer model, dark-colored Nissan Altima. They got into a fight which resulted in Aikens being shot. The suspect ran to the waiting car and fled the scene.

The Houston Police Department has not confirmed whether they are still hunting for other suspects.

HOUSTON — Houston Police have released photos of a man and woman who witnessed the fatal shooting at 6603 Hirsch Road about 4:35 p.m. on June 3. The individuals are not charged at this time and are considered persons of interest with knowledge of the incident.

Clark Van Der Beken/UnsplashHOUSTON — Houston Police Department is currently investigating a fatal crash on June 2, 2021, at about 9:20 a.m., at 8000 Eastex Freeway, Texas, that killed a 3-year-old girl and an infant.

HOUSTON — A Houston man has been sentenced to prison for identity theft in the Eastern District of Texas, Acting U.S. Attorney Nicholas J. Ganjei announced on Tuesday, May 25.

(Photo By Kastasha Harris/Pexels) Using your voice is always needed when you live in an apartment complex because things may need to be repaired or neighbors may be disruptive.

HOUSTON – Police are asking for the public’s help finding the person responsible for a fatal shooting in southwest Houston. The incident happened around 2 a.m. on Concourse Drive near Duchamp Drive in the Westwood area, police said. According to authorities, witnesses told them the victim, 29-year-old Elias Marzano, and...

MUGSHOT: Robbery suspects on the run after stealing mans clothes and money

HARRIS COUNTY (CW39) – Harris County deputies are searching for 20-year-old Seth Garcia, who they say was part of a group that robbed a man, taking the victim’s clothes and cash. Deputies responded to the seen on Rolling Glen Drive on Thursday, May 14th, right around midnight. In talking to...

Vehicles are driving on the shoulder past the investigation Monday afternoon on I-45 near Griggs.

Houston – All northbound lanes of IH-45 Gulf Freeway have been shut down after a deadly shooting and crash, according to police. Houston police responded to reports of a crash on the Gulf Freeway at Griggs Road around 12:25 p.m. Police said two vehicles were speeding and weaving in and...

HOUSTON — An apparent road rage shooting on the Gulf Freeway left one person dead and the inbound lanes blocked. Witnesses say two vehicles were speeding and weaving in and out of traffic. One driver lost control near Griggs Road and hit a concrete barrier, then bounced back into traffic...

One person with a gunshot injury has died after a southeast Houston crash which possibly involved road rage, police said. The crash has also caused a complete closure of Interstate 45 northbound’s main lanes after Griggs Road. The incident involving four vehicles concluded in the area, with two cars left...

Both the Fort Bend County and Harris County sheriff’s offices are seeking the public’s assistance in tracking down a suspect wanted for a series of robberies in both counties. The young man enters stores, walks up to the service counter, and passes over a note to employees demanding money, law enforcement officials say.

HOUSTON — Houston police need the public's help with identifying a suspect who robbed a woman at gunpoint while she was withdrawing money from an ATM. This happened on Feb. 19 at about 10:30 p.m. at an ATM in the 11000 block of Westheimer. Houston police said the woman was...

HOUSTON - Houston police say a driver died after he was shot and then crashed along the Gulf Freeway. The shooting occurred around 12:20 p.m. in the inbound lanes near Griggs. Police say two vehicles were seen speeding and weaving in and out of traffic. One of the vehicles reportedly...

HOUSTON (CW39) The Houston Police Department Robbery Division is warning Houstonians to be on the lookout for a armed criminal that pulled a gun on a woman who was using an ATM in West Houston. On Wednesday, February 10, 2021 at 10:30 pm, investigators say the woman was withdrawing money...

Traffic got moving again on the inbound lanes of the Gulf Freeway, but a deadly shooting kept lanes closed for several hours.

On Tuesday, May 11 around 2 a.m. Deputy Seth Nagel stopped a Ford pick-up for an expired registration on Hwy. 71 near Kirtley Road. The report said an odor of marijuana was present and after a probable cause search of the vehicle, the driver was found to be in possession of marijuana, THC wax and several firearms. The driver was charged with possession of a controlled substance, possession of…

Police say the family was walking back to their car when the 23-year-old man attacked a wife and mother. Now, it's sparking a big concern.

Shooting outside of Houston Grand Prix leaves one teen injured

A shootout in front of a go-cart track in north Harris County late Saturday left one teen with a bullet wound on his buttocks, police said. The boy told police he was standing in the parking lot of Houston Grand Prix off the Eastex Freeway when a blue Buick pulled up and started shooting. He said he returned fire, and was grazed by a bullet at some point.

HOUSTON - A man is dead after authorities say a drunk driver hit him overnight in west Houston. And while DWI charges have been accepted by the District Attorney’s office, more charges could come soon. It all started in the 6700 block of State Hwy 6 South around 2 a.m.,...