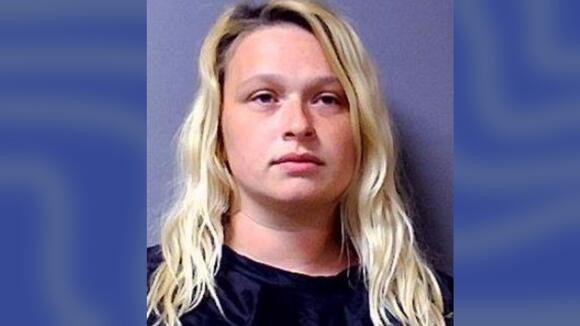 ANDERSON, Ind. — A pregnant Indiana woman is accused of leaving five children in a running vehicle while she went inside a medical center for an appointment, authorities said Wednesday.

Chessany Marie Robbins, 23, of Anderson, was charged with five counts of Level 6 felony neglect of a dependent, according to Madison County Sheriff’s Office online booking records.

According to an affidavit of probable cause written by Anderson Police Department Officer Gordon Corner, authorities conducted a welfare check Monday afternoon after receiving a report about several children unattended in a vehicle, the The Herald Bulletin of Anderson reported.

Corner said he found a white minivan parked in a side lot that contained five children, the newspaper reported. The oldest child was 8 years old, Corner wrote in the affidavit.

According to Corner, the child told him her sister, Robbins, was inside the building at a doctor’s appointment for an ultrasound, The Herald Bulletin reported.

Surveillance cameras showed that the children were unattended for nearly 40 minutes, WXIN reported.

The vehicle was unlocked and running, and the air conditioner was turned on to a low level, Corner wrote in the affidavit. However, the officer noted that the air coming through the vents was warm.

Corner said the temperature was 74 degrees outside and humidity was at 84% when he found the children, according to The Herald Bulletin.

According to the affidavit, a boy inside the minivan was naked, and a 1-year-old was not properly secured in a car seat, the newspaper reported.

“I observed what appeared to be fresh vomit on the front passenger seat and in the rear passenger area of the vehicle,” Corner wrote in the affidavit.

Robbins told police three of the children inside the van were hers, while the other two were her stepmother’s, WXIN reported. According to the police affidavit, Robbins said she believed the children would be OK with the oldest child while she went to her appointment, the television station reported.

“I can’t imagine being left in there for 40 minutes, whether the engine was on or off, it was a miserable environment in that vehicle,” Madison County prosecutor Rodney Cummings told WXIN.

Corner said he spoke with the mother of the other two children, The Herald Bulletin reported. The woman told him she believed Robbins was taking her children to a grandmother’s home to get money.

“She said she would’ve never allowed them to remain in an unattended vehicle, especially in the area it was in,” Corner wrote in his affidavit.

NEWBERRY, S.C. — The parents of a South Carolina baby who died last month have been charged after tests revealed cocaine was in the child’s system, authorities said. Brady Lynden Wearn, 18, and Mary Catherine Bedenbaugh, 17, both of Prosperity, were charged with homicide by child abuse and unlawful conduct toward a child, WIS-TV reported.

Somerville, Tenn. — One of the three male juveniles who escaped from the Wilder Youth Development Center in Somerville, Tennessee has been captured, according to the U.S. Marshals office. Fayette County officials said the 17-year-old escaped with two other 17-year-olds after midnight Wednesday morning. One of those teens was captured...

DENVER — (AP) — The older brother of a 13-year-old boy who disappeared in Colorado in 2012 confronted his father about photos of him eating feces from a diaper months before his younger sibling went missing, the boy's brother testified Thursday. The father, Mark Redwine, is being tried in the...

MEMPHIS, Tenn. — Memphis police say a man and a woman are behind bars after a shooting over a spicy chicken sandwich at a local fast-food restaurant. On June 6, police received a call to the Burger King at 2641 N. Hollywood, according to an affidavit. A female passenger in...

DENVER — (AP) — The older brother of a 13-year-old boy who disappeared in Colorado in 2012 confronted his father about photos of him eating feces from a diaper months before his younger sibling went missing, the boy's brother testified Thursday. The father, Mark Redwine, is being tried in the...

County to pay $280K to journalists tear-gassed in Ferguson

Three journalists with Al Jazeera who were tear-gassed during a protest in Ferguson, Missouri, after Michael Brown's death in 2014 have settled a lawsuit with the county whose SWAT team fired the tear gas. St. Charles County agreed to pay $280,000, according to the law firm Lathrop GPM, which represented...

MEMPHIS, Tenn. — First responders rushed to a gym in East Memphis Thursday afternoon after a vehicle crashed into the building. It happened around 1 p.m. at God Body Fitness and Nutrition in the 3900 block of Park Avenue near Getwell Road. Police said a pedestrian was also hit. Two...

MEMPHIS, Tenn. — A man is in critical condition after a shooting in Hickory Hill Thursday morning, Memphis police said. The shooting happened in the 4300 block of French Market Circle. MPD said the man was rushed to Regional One after being shot. The suspects fled in a black Chevy...

EXPLAINER: What to know as Chauvin sentenced in Floyd death

MINNEAPOLIS — (AP) — Former Minneapolis police Officer Derek Chauvin faces sentencing Friday in the death of George Floyd, with a judge weighing a prison term experts say could be as much as 30 years. Chauvin, 45, was convicted in April of second-degree unintentional murder, third-degree murder and second-degree manslaughter...

Holy cow, not again! More bovines get loose in a US town

HUNTINGTON, W.Va. — (AP) — The revenge of the cows heated up Thursday with yet another instance of a herd getting loose in a U.S. community. This time a cattle-hauling truck rolled over along Interstate 64 in West Virginia, and an emergency dispatcher in Cabell County said a bridge connecting Huntington to Lawrence County, Ohio, also had to be shut down temporarily.

SHELBY COUNTY, Tenn. — Shelby County health officials gave an update Thursday on COVID-19 data and vaccination efforts in the area. Over 690,000 vaccines have been given in the county, according to Dr. David Sweat. Over 309,000 people are fully vaccinated at this time, 33 percent of the population. On...

Some expressed concern about road safety at fatal wreck site

BIRMINGHAM, Ala. — (AP) — Local officials were concerned about the safety of a heavily traveled stretch of Interstate 65 where 10 people died in a fiery crash long before the pileup last weekend, and the road itself could become part of the investigation into the wreck. State Rep. Chris...

HAMILTON, Mont. — (AP) — A western Montana couple were able to save a horse from drowning in the Bitterroot River on Father's Day, and may have made a new friend in the process. Matthew and Christina Eickholt of Hamilton were floating down the river on Sunday with Matthew's parents...