By Vincent Frank
Posted by
Sportsnaut
2 days ago 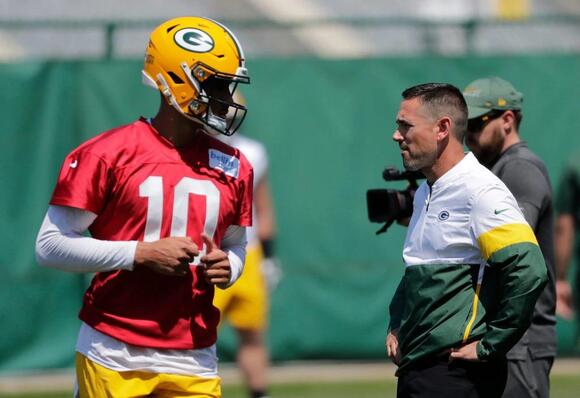 Thus far during the early portion of the Green Bay Packers’ offseason activities, it’s been a mixed bag for young quarterback Jordan Love .

Entering his second year, reports surfaced earlier that Love has not looked great during OTAs . More recently, it seems like the Utah State product is turning the corner.

The backdrop here is reigning NFL MVP Aaron Rodgers holding out from mandatory minicamp as he seeks a trade. That has put the spotlight on Love, especially if the small-school product is forced to start Week 1 against the division-rival New Orleans Saints.

In speaking to the media on Wednesday, Love made it perfectly clear that he’ll be ready to start opening day if Rodgers remains a holdout or is granted his request of a trade.

“A hundred percent,” Love told reporters on Wednesday . “Obviously, this is a time where I’m getting a lot of extremely valuable reps that I might not have been getting in a normal circumstance. So I’m just going to take it day by day. But yeah, that’s what I’m here for. I was drafted here to play quarterback, so I’ll definitely be ready Week 1.”

Love was selected in the first round of the 2020 NFL draft by Green Bay, a move that didn’t sit well with Rodgers.

Rodgers wanted offensive help that could contribute right away and definitely wasn’t expecting the team to select his potential replacement.

Aaron Rodgers seemed motivated by the situation and had a stellar season that included a career-best 48 touchdown passes along with 4,299 yards and just five interceptions, helping the Packers reach the NFC title game and earning his third league MVP award. 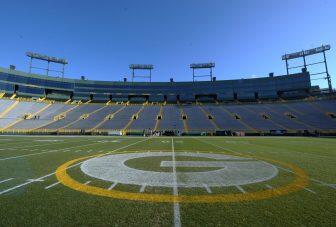 Rodgers, 37, made it clear following Green Bay’s loss to the Buccaneers in the aforementioned title game that his future with the Packers is uncertain. Then, on the day the 2021 NFL Draft started in late April, reports surfaced that he wanted to be traded .

This obviously puts Jordan Love in an unenviable position as he attempts to grasp the Packers’ offense during minicamp while working to cultivate relationships with pass-catchers. Remember, in-person offseason activities were canceled last year due to the COVID-19 pandemic. That put Love behind the proverbial eight-ball.

Will Jordan Love be ready to start for the Green Bay Packers?

“It just goes back to kind of taking what’s there, and the opportunities presented themselves today for him to take some shots down the field,” head coach Matt LaFleur told reporters Wednesday, via the team’s official website . “One emphasis for Jordan is just to treat each play as its own entity. We’re always grading the decision-making, the timing, the accuracy and we want to see the consistency just continue to get better and better.”

While it all seems positive in Packer-land right now, it’s important to note that we have not seen Jordan Love perform within the confines of a game. In addition to offseason activities being thrown out the window last year, the preseason was also canceled. This means Love has not taken a snap in live-game action since the Frisco Bowl against Kent State back in December of 2020.

Obviously, the Packers would love to have Rodgers in the mix once Week 1 comes calling. After all, he’s not the reigning NFL MVP for no reason. With that said, they also need to prepare for Jordan Love to take reps should the Rodgers’ situation not improve. That’s why this week’s three-day minicamp is so important.

Aaron Rodgers Could Pull Unheard Of Move With Packers

The situation between Aaron Rodgers and the Green Bay Packers remains up in the air. Rodgers appears to continue to want out. He has not reported to voluntary OTAs and it’s unclear when – or if – he plans on showing up this offseason. The Packers, meanwhile, don’t appear to be interested in trading him.

Aaron Rodgers to the Giants is not as crazy as it seems when you first say it out loud. In fact, the idea of the reigning NFL MVP being traded from the Green Bay Packers to the Giants in a spring or summer blockbuster before training camp shouldn’t be ruled out.

According to a report from NFL insider Tom Pelissero, Green Bay Packers quarterback Aaron Rodgers was not present at the start of the 8:30 a.m. team meeting. With Rodgers not being at the mandatory minicamp, he is officially a holdout.

With or without Aaron Rodgers, the Green Bay Packers are having their mandatory minicamp, and one face the team must be so happy to see show up on Tuesday was wide receiver Davante Adams. Like Rodgers, Adams also missed Green Bay’s voluntary offseason workout along with several other players back...

GREEN BAY – After signing six-year veteran quarterback Blake Bortles to a one-year deal earlier this past week, the Green Bay Packers apparently added quarterback Kurt Benkert to the room Saturday. Benkert, 25, tweeted a photo of him signing a contract in Packers gear. “The best advice I can give...

As the Green Bay Packers continue to bring more bodies into the QBs room while they await Aaron Rodgers’ return, some players at other positions are sadly going to pay the price. That’s now the case for one third-year defensive lineman. On Thursday, the Green Bay Packers announced that they...

Jordan Love wants the Green Bay Packers to know this amid the uncertainty surrounding Aaron Rodgers: He’s ready to start. The 22-year-old quarterback has been turning heads in the Packers’ mandatory minicamp as Rodgers remains absent from the team. While he is far from perfect, his improvement has been quite noticeable, which has given Green Bay some optimism in the QB position despite the questions that have engulfed it this offseason.

Packers being smart with WR Davante Adams during minicamp

The Green Bay Packers know what they have in wide receiver Davante Adams, providing an opportunity during minicamp to protect their All-Pro pass-catcher while also providing reps for the other players at his position needing the experience. Adams, who caught 115 passes last season, is entering a contract year, and...

Aaron Rodgers is expected to skip the Green Bay Packers’ mandatory minicamp when it gets underway Tuesday, according to a

What's the latest on the Aaron Rodgers trade front?

Aaron Rodgers is clearly frustrated with the Green Bay Packers’ organization, so much so that he skipped organized team activities earlier this spring. OTAs are voluntary, though, so skipping them doesn’t mean much. If Rodgers had skipped OTAs and then reported for mandatory minicamp, trade buzz surrounding the quarterback likely would have died down.

A star-packed field is coming to the American Century Championship golf tournament July 9-11. This year, fans will be back, too. Sports and entertainment superstars will head to Edgewood Tahoe Golf Course in Nevada to compete in the celebrity event raising funds for charity. Justin Timberlake, Tony Romo, Aaron Rodgers,...

The Green Bay Packers drew five primetime games, plus a potential late CBS Aaron Rodgers vs. Patrick Mahomes matchup, but those games could all lose their allure if Rodgers does not return to Green Bay.

As Jordan Love works to improve, Packers admit they aren’t exactly sure what they have in their young QB

GREEN BAY — Conversationally, the Green Bay Packers coaches and players are walking a challenging line when it comes quarterback Jordan Love. Against the disconcerting backdrop of three-time NFL MVP Aaron Rodgers’ continued absence from their offseason program, and concerns that the future Pro Football Hall of Famer may never play another snap for the franchise, all eyes have been on Love during the two organized team activity practices that reporters have been allowed to attend over the past two weeks.

Green Bay's offseason of offensive absences is expected to be trimmed to just one this week. That remaining absence (﻿Aaron Rodgers﻿) is a gigantic one, of course, but after spending OTAs away from the team, the collection of the Packers' top pass-catching talent will soon be back to work. Rodgers' receiving teammates, including ﻿Davante Adams﻿, are either back in Green Bay for mandatory minicamp or are expected to be this week, NFL Network Insider Ian Rapoport reported Monday.

Note: This is a commentary by Sports Illustrated’s Michael Rosenberg. CLICK HERE to read it in its entirety. The Packers might win another Super Bowl with Aaron Rodgers, but they cannot win their standoff with him. That is because nobody really wins this kind of standoff. As soon as you are in it, you have lost.

James Jones is one of the few people who seem to have real insight into why Aaron Rodgers is unhappy with the Green Bay Packers, and the former wide receiver offered a strong hint about the situation this week. Jones, who was teammates with Rodgers for eight seasons and remains...

Which players are in line to earn big-money contracts in the near future? Anthony Holzman-Escareno takes a look into his crystal ball to project the All-Paid Team of Tomorrow, listing the top candidate to become the next player to push for the rank of highest paid at each position, along with other players who are on the big-money radar (note that contract information is sourced from Over The Cap and/or Spotrac):

What Would Packers Receive for Trading Aaron Rodgers?

It’s official — the first practices of 2021 are in the books for the Green Bay Packers. Yes, those practices just covered the two days of rookie minicamp over the weekend, but it was still a meaningful step in a number of ways. First, the team got its first look at the 2021 draft picks and undrafted rookies; second, it’s a notable step back towards normalcy and a post-COVID-19 football world.