AccuWeather delivers award-winning weather forecast insights, from our experts to audiences around the world. 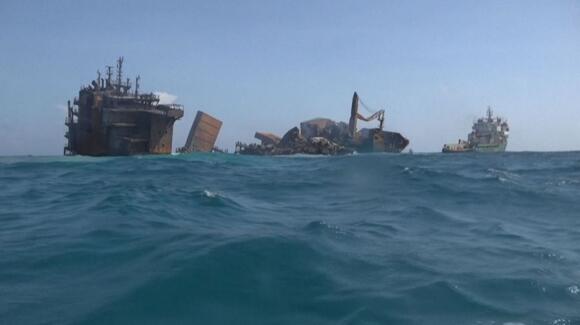 The private Centre for Environmental Justice is suing the Sri Lankan government and operators of a container ship that is sinking into the Indian Ocean after burning for almost two weeks offshore.

Environmentalists sued the Sri Lankan government last week after a container ship loaded with dangerous chemicals and plastics burned off the coast in the Indian Sea for just under two weeks. The Center for Environmental Justice (CEJ) filed a lawsuit against the operators of the ship as well, and activists are calling for an independent inquiry into the disaster.

Meanwhile, Sri Lanka is now dealing with a growing environmental disaster as large amounts of plastic pellets, chemicals and oil from the sinking ship blanket its coastline. The mix of residue that littered the beaches there was described as plastic "snow."

Hemantha Withaanage, executive director of CEJ, expects the waste to take 1,000 years to degrade saying, “this will be a long-lasting environmental pollution.” Experts say the pellets still in the sea could travel as far as India.

The legal challenge against the government and operators seeks unspecified damages, claiming the crew was aware of an acid leak on May 11, long before the ship entered Sri Lankan waters, and it should never have been allowed in. The ship’s owners say they could not fix the problem because Qatar and India would not allow the ship to dock. Sri Lankan officials believe the fire that broke out on May 20 was caused by the leaking acid.

A hearing date has yet to be set.

Keep checking back on AccuWeather.com and stay tuned to the AccuWeather Network on DirecTV, Frontier, Spectrum, FuboTV, Philo, and Verizon Fios.

(CNN) — President Joe Biden said Tuesday that his "heart goes out" to the families affected by a school shooting in southeast Michigan, which left three people dead and eight others injured. "I was informed after the tour. I learned about a school shooting in Michigan. As we learn the...
MICHIGAN STATE・4 HOURS AGO
The Associated Press

WASHINGTON (AP) — A panel of U.S. health advisers on Tuesday narrowly backed a closely watched COVID-19 pill from Merck, setting the stage for a likely authorization of the first drug that Americans could take at home to treat the coronavirus. A Food and Drug Administration panel voted 13-10 that...
PUBLIC HEALTH・4 HOURS AGO
NBC News

When Jeremy Kamil got his first look at B.1.1.529, the coronavirus variant that would soon be named omicron, it didn’t take long to see the differences. More than 30 mutations made the variant's spike proteins, which cover the outside of the virus and are the main targets of vaccines and the body’s immune responses, different from those of the virus that first emerged in late 2019.
SCIENCE・3 HOURS AGO

It was an emotional day at the sex-trafficking trial of British socialite Ghislaine Maxwell as one of disgraced financier Jeffrey Epstein's alleged victims testified against Maxwell. Taking the stand as "Jane" to protect her identity, the first victim to testify in Maxwell's trial said she was 14 and frozen in...
PUBLIC SAFETY・34 MINUTES AGO
The Associated Press

It’s the moment conservatives have been waiting for. Oral arguments at the Supreme Court on Wednesday represent the best opportunity leaders on the right have had in decades to gut the landmark 1973 Roe v. Wade decision, which codified a woman’s constitutional right to an abortion before a fetus can survive outside the womb.
CONGRESS & COURTS・3 HOURS AGO
The Associated Press

WASHINGTON (AP) — The losing side is likely to head straight to the Supreme Court, whatever decision the U.S. Court of Appeals for the District of Columbia Circuit reaches on whether Congress should receive former President Donald Trump’s call logs, drafts of speeches and other documents related to the Jan. 6 insurrection at the U.S. Capitol.
WASHINGTON, DC・3 HOURS AGO

A defense attorney for Kim Potter says the former Brooklyn Center police officer will testify in her manslaughter trial over the killing of Daunte Wright. While questioning a prospective juror, defense attorney Paul Engh said Potter will take the stand, CBS Minnesota reports. The development came as lawyers and a...
BROOKLYN CENTER, MN・8 HOURS AGO
The Associated Press

SAN JUAN, Puerto Rico (AP) — Barbados stopped pledging allegiance to Queen Elizabeth II on Tuesday as it shed another vestige of its colonial past and became a republic for the first time in history. Several leaders, dignitaries and artists, including Prince Charles and Rihanna, attended the ceremony that began...
POLITICS・21 HOURS AGO

AccuWeather delivers award-winning weather forecast insights, from our experts to audiences around the world.