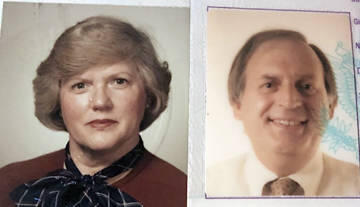 Harriett Jane Scott was born February 18, 1937 in Maysville Kentucky and passed away March 6, 2021 She was preceded in death by her parents, Walter and Elga Wilson. Jane graduated from Ripley high school and the Ohio State University where she was in the Alpha Gamma Delta sorority. Jane was a member of the Centenary United Methodist Church of Ripley. She married Gordon Scott and they celebrated over 50 years of marriage together.

Robert Gordon Scott was born May 31, 1937 to Glen and Mildred Scott of Athens Ohio. He passed away May 9, 2021. Gordon graduated from Ohio University and was a member of the Beta Theta Pi fraternity. He was a talented chemical engineer and was known for mixing special inks and dyes.

Both Jane and Gordon were only children and had no children of their own. The early years of their marriage were spent in Ripley. Jane was a teacher in the Georgetown school district and both were active in the Ripley Theater Guild. They later moved to the Cincinnati area and lived in an historic home in the core of old West Chester. Jane was a lover of antiques, attended shows across the country, and after retiring to Ripley had an antique shop on Main Street.

According to their wishes, there will be no services. Any donations in their honor can be made to the Brown County Humane Society, as Jane was a champion for animal welfare.

The air was floral and fragrant during Ohio Valley Lavender’s first Lavender Festival in Georgetown on July 17 and 18. The tw

Celebration of Life for Ruby M. Berry Marshall on Aug. 1

Georgetown is home to many local businesses and vendors, and on September 11, more than twenty will be gathered at Kathryn Hanlon Park to sell