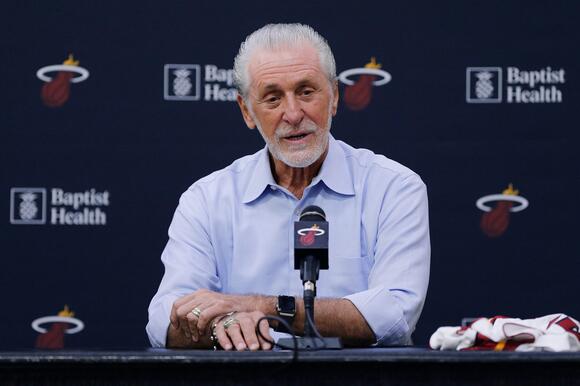 Pat Riley knew his checkbook would be feeling it right after the words came out of his mouth.

“If he ever wanted to come back, I’ll put a new, shiny key under that mat," the Miami Heat president said on "The Dan Le Batard" show last Friday in reference to the Los Angeles Lakers' LeBron James. "This will get me fined.”

The league fined Riley $25,000 on Wednesday for violating anti-tampering rules, two days after the league hit up Philadelphia 76ers general manager Daryl Morey for $75,000 after he posted a tweet the NBA deemed was in reference to Stephen Curry of the Golden State Warriors.

Riley had been discussing the successes the Heat saw during James’ four years with the organization. There was also confusion over whether the question that ultimately led to Riley's "tampering" comments was in regard to Dwyane Wade or James.

The conversation also included references to past Riley comments about leaving keys under doormats, a metaphor he used to essentially say any of the former Miami Big Three would always have a place in the organization.

Riley was also asked about who actually convinced LeBron to join the Heat: himself or Wade?

"If I were to give you a real, truthful answer on that, I’d probably be excommunicated from the NBA," he joked. "So I can’t (say)."

Much has been made about the NBA’s compressed schedule this season and how it has been one of the primary reasons behind the multitude of injuries that has mired the playoffs. One of the biggest critics has been LeBron James, but apparently, Phoenix Suns star Chris Paul has a contradicting view to that of his buddy.

Fans are clapping back at Scottie Pippen for giving LeBron James too much credit on the court. When it comes to the NBA, there are few players as great or well-recognized as the Los Angeles Lakers’ LeBron James, 36. Even though LeBron is surely one of the greatest of all time, former Chicago Bulls star Scottie Pippen, 55, landed in hot water when he said that LeBron “won a championship without any help” on Twitter on Friday June 25.

How The Los Angeles Lakers Can Create A Superteam: 5 Perfect Targets

The disappointing first-round exit by the Los Angeles Lakers has many implications. For starters, it exposed the team’s need to stay healthy. Despite bringing veteran role players to the team in Dennis Schroder, Montrezl Harrell, and Marc Gasol, the star power was not enough when Anthony Davis was injured. With...

LeBron James’s Wife Savannah James: Here’s Why She is Trending

LeBron James and his wife Savannah are high school sweethearts. It’s hard to imagine such a humble beginning to their relationship. Especially when considering the status that LeBron has achieved as a result of his NBA career. But Savannah has been by his side the whole time. And the beautiful entrepreneur has been getting a ton of love on Twitter recently.

Phoenix Suns superstar Chris Paul is getting all the motivation he needs from his long-time buddies Dwyane Wade and even LeBron James as the Suns are now just two games away from winning the 2021 NBA title. After an impressive 118-108 home win in Game 2, Wade was seen in...

The Miami Heat are a team that went to the Finals during the 2019-20 season, with Jimmy Butler as the star that led them there. It is clear that they have good pieces on the roster, but it seems as though they are a step away from true contention. This year's playoffs showed that, as they were unceremoniously swept by the Milwaukee Bucks, who are now in the NBA Finals.

Carmelo Anthony is rumored to join the Los Angeles Lakers. Anthony pairing with LeBron James may be a short-term solution for the Lakers. Adding Anthony could dampen hopes of seeing young stars shine in a Lakers uniform. Carmelo Anthony is most likely to end up looking for a new team...

Even when he's not playing, LeBron James finds ways to be in everybody's mouths. This weekend, specifically, he was the talk of the town on social media. After the premiere of Space Jam: A New Legacy, the Los Angeles Lakers superstar attended Game 5 of the 2021 NBA Finals. He...

Michael Jordan and Shaquille O’Neal are regarded as two of the greatest players to have ever lived and occupied the top-10 all-time list for the majority of fans and pundits. While each player had different playing styles, they were dominant in their respective eras and hold an achievement that isn’t shared with any other player besides them. Jordan and O’Neal are the only two players in NBA history with 3 championships and 3 straight Finals MVPs to their resumes.

Los Angeles Lakers superstar LeBron James has been very invested in helping his son Bronny develop his basketball skills. NBA legend Dwyane Wade recently praised the elder James for his role in the younger James’ growth. In the process, Wade referred to the younger James as a complete player. It...

Adele and Rich Paul, LeBron James’ agent, attended an NBA match together. The pair sat next to each other and looked cozy, prompting many to wonder if they’re an item. RELATED: Adele jokes about weight loss and says her album is ‘not finished’ in ‘SNL’...

Los Angeles Lakers superstar LeBron James is pulling for Phoenix Suns point guard Chris Paul to win his first NBA title. James and Paul have been close friends for years, and the Lakers star showed Paul some love following Phoenix’s 118-108 victory over the Milwaukee Bucks in Game 2 of the NBA Finals.

On Tuesday night, the Milwaukee Bucks took down the Phoenix Suns by a final score of 105-98 en route to winning the NBA title. Milwaukee fell down 0-2 in the series after losing both of the first two games in Phoenix. However, the Bucks battled back, winning four straight games to win the NBA Finals in six games.

If there’s something strange in your neighborhood after losing in the NBA Finals, who you gonna call? LeBron James. Or at least according to NBA legend Magic Johnson. After the Phoenix Suns got axed by the Milwaukee Bucks in Game 6 on Tuesday, Magic made a bold suggestion for Chris Paul. He said if the veteran playmaker opts out of his contract, he should definitely make LeBron his “first call” to possibly join the Los Angeles Lakers.

Top 10 Most Impressive NBA Finals Debut Performances: Michael Jordan Is First, LeBron James And Kobe Bryant Are Out Of Top 10

With the NBA Finals now done, we now have a new NBA champion - The Milwaukee Bucks. Giannis Antetokounmpo helped lead the Bucks to their first NBA championship in 50 years. For his incredible performances in the series, Giannis was named Finals MVP, and deservedly so. Giannis had one of the all-time great Finals performances, especially in Game 6. But where does his performance rank among the all-time great NBA Finals debuts? Let's take a look.

Giannis Antetokounmpo’s dominant outing in Game 6 of the NBA Finals has captivated the entire sporting spectrum. Antetokounmpo dropped 50 points, 14 rebounds, five blocks and two assists while making 17-of-19 free-throw attempts in a closeout game to win his first title. The Phoenix Suns simply had no answer for...

Magic Johnson indeed has big plans for the Los Angeles Lakers. The legendary point guard always wants to see his team winning, constantly dropping ideas of what players they should land to win the NBA championship. Johnson is no longer with the franchise, but he bleeds purple and gold, so...