Fauci to Chelsea Clinton: The 'phenomenal amount of hostility' I face is 'astounding' 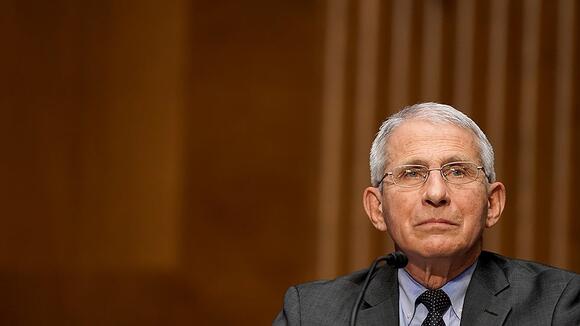 Anthony Fauci , the nation's leading infectious diseases expert and President Biden 's chief medical adviser, said in an interview released Tuesday that he has been the object of a "phenomenal amount of hostility."

Fauci, a popular target among conservatives, made the remarks while speaking with Chelsea Clinton on her podcast "In Fact with Chelsea Clinton" after she asked what could be done to rebuild trust in science, particularly in vaccines, as the Biden administration continues its coronavirus pandemic response.

"I mean, I've been the object myself of a phenomenal amount of hostility merely because I'm promoting what're really fundamental simple public health principles" he added. "That seems astounding that that would generate a considerable degree of hostility, but it is, it is."

The head of the National Institute of Allergy and Infectious Diseases said pointing fingers at one another is not the way to improve trust, pushing an approach that focuses on outreach.

"I don't know the answer to your question," he told Clinton. "It's a seemingly simple question, but a complicated answer. We've got to reach out to people and get them to understand that this is for their own safety, their own health and also what I refer to as communal responsibility, your responsibility to society."

He added that "there is a thing called the chain of transmission of an outbreak," and people need to take steps to be a "dead end" in the chain as opposed to someone who passes the disease along.

"I never thought I would say I wanted to be a dead end. But yes, here I am, like very happy to be fully vaccinated and a dead end," Clinton said.

Fauci has faced a barrage of attacks from members of the GOP, getting into several heated arguments with Sen. Rand Paul (R-Ky.) in particular. Paul has attacked Fauci multiple times for shooting down proposed conspiracy theories about the origins of COVID-19 and the necessity of mask wearing.

During an interview in early May, Fauci said of Paul, "I just don't understand what the problem is with him."

"Well, I'm just going to do my job and he can do what he wants to do and we'll see what happens," Fauci added.

Rep. Madison Cawthorn (R-N.C.) says he wants to “prosecute” Anthony Fauci should the GOP regain control of the House in 2022. Cawthorn's remark underscores how Fauci has become central to GOP attacks on the Biden administration and the government's handling of the coronavirus, even as the delta variant sweeps through unvaccinated communities and it becomes clearer and clearer that vaccinations are a key to stomping out the disease.

Dr. Anthony Fauci called recent comments by Senator Rand Paul (R-KY) "inflammatory" and "slanderous," after a heated exchange about the origins of COVID at a Senate hearing on Tuesday. Fauci, director of the National Institute of Allergy and Infectious Diseases (NIAID), spoke to MSNBC's Ari Melber on Thursday about his...

Republican lawmakers and media personalities have recently made a noticeable pivot toward supporting vaccinations and calling out unvaccinated Americans. The change in tone is not lost on Dr. Anthony Fauci, the chief medical advisor on COVID-19 to President Joe Biden. During an appearance Sunday on State of the Union, Fauci...

Don Lemon Asks ‘What Is Wrong With Rand Paul?’ After Throwdown With Fauci: ‘Stop It. You Look Like an Idiot’

The explosive exchange between Sen. Rand Paul and Dr. Anthony Fauci during a Senate hearing on Tuesday drew the ire of Don Lemon later that evening, who slammed Paul for attempting to make Fauci his “personal punching bag.”. The two clashed over whether the U.S. National Institutes of Health had...

Rep. Marjorie Taylor Greene's push to remove Dr. Anthony Fauci from his position at the National Institute of Allergy and Infectious Diseases [NIAID] gained another supporter, making it one of her most cosponsored pieces of legislation. Greene's been a vocal critic of Fauci, who's advised every president since Ronald Reagan...

Madison Cawthorn Calls For ‘Punk’ Fauci to Be ‘Charged’ on Newsmax: ‘Pawn for the Chinese Government’

Rep. Madison Cawthorn (R-NC) on Tuesday railed against Anthony Fauci, director of the National Institute of Allergy and Infectious Diseases, saying he should be charged for lying to Congress and calling him “a punk” and “a pawn for the Chinese government.”. During a Senate committee hearing earlier on Tuesday, Fauci...

Dr. Fauci And Rand Paul Face Off Over COVID-19, Again

‘You do not know what you are talking about,’ Fauci told the Kentucky Republican.

Fauci blames 'ideological rigidity' for political divide in vaccination debate: 'I just don't get it'

Dr. Anthony Fauci has blamed "ideological rigidity" as a deterrent to vaccination efforts in the face of the rising threat of more virulent COVID-19 variants. Just under half of all eligible Americans have received full vaccinations against the coronavirus, but the Delta and Lambda variants threaten that progress. The Biden administration has continued to urge Americans to receive the shots as soon as possible, but in some states the demand for vaccines has fallen, even with ample supplies now available.

Fauci blasts North Carolina congressman calling for criminal 'consequences': 'Where does he come off?'

Dr. Anthony Fauci fired back Friday on Fox News at a freshman congressman's call for a potential criminal investigation against him if the GOP retakes the House of Representatives in 2024. Rep. Madison Cawthorn, R-N.C., on Tuesday called Fauci a "punk" and accused him of using his newfound prominence to...

MSNBC anchor Ayman Mohyeldin on Thursday called out Senator Rand Paul for “baselessly” accusing National Institute of Allergy and Infectious Diseases (NIAID) director Dr. Anthony Fauci of being responsible for Covid-19. The comment stems from the debate over whether the National Institutes of Health (NIH) funded gain-of-function research in the...

Vaccinated America Has Had Enough

In the United States, this pandemic could’ve been over by now, and certainly would’ve been by Labor Day. If the pace of vaccination through the summer had been anything like the pace in April and May, the country would be nearing herd immunity. With most adults immunized, new and more infectious coronavirus variants would have nowhere to spread. Life could return nearly to normal.

Republican firebrand Rep. Marjorie Taylor Greene declared Dr. Anthony Fauci to be an "enemy" of the country and of the world, adding that he should be investigated regarding the coronavirus outbreak.

Rep. Ronny Jackson, the former White House physician-turned-congressman, says he’s “terrified for our country” in the wake of President Joe Biden’s disastrous town hall this week — and that he doubts whether the commander in chief has the cognitive ability to make it through a full term. “He’s completely LOST...

Despite President Joe Biden's recent warning of short-term inflation, an ongoing petition for monthly stimulus checks of $2,000 has continued to gather signatures over the past week amid a spike in COVID-19 cases. Denver restaurant owner Stephanie Bonin created the Change.org petition last year, which calls for the U.S. House...

Former President Donald Trump took aim at several Republican officials, including Senate Minority Leader Mitch McConnell, while speaking at a rally on Saturday in Phoenix, Arizona. Mr. Trump dubbed Mr. McConnell as being “an old crow,” while alleging the Kentucky Republican begged for his endorsement in the 2020 election and...

Former President Donald Trump escalated his baseless voter fraud claims in Phoenix on Saturday, saying that Democrats can't win any elections without cheating—after Arizona Secretary of State Katie Hobbs urged the Republican to get over his 2020 election loss. Hobbs, a Democrat, encouraged Trump to "take your loss, accept it...

Donald Trump Jr. has weighed into the debate over the future of The View after Meghan McCain announced that she would be leaving the ABC show. There's growing speculation over who might replace McCain after she said earlier this month that she would leave the show to remain in Washington, D.C., where she moved before the birth of her daughter, Liberty.