By Gustaf Kilander
Posted by
The Independent
12 days ago 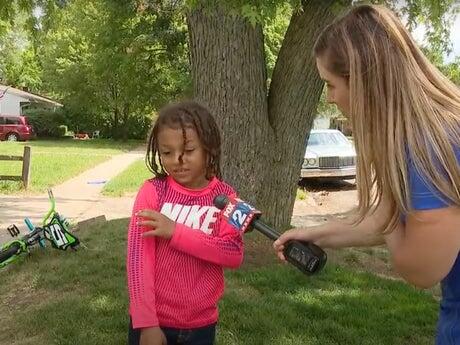 A 29-year-old man has been released on bond after allegedly shooting a Black boy who was retrieving his bike from the man’s yard.

Arnold Daniel in Ypsilanti, west of Detroit , Michigan , said his kids were outside riding their bikes down the street when they stopped, leaving one of the bikes in front of the home of a neighbour.

When Mr Daniel’s son Coby returned to pick up his bike, the father said the neighbour exited his home holding a sledgehammer and said something to Coby. Mr Daniel told Fox 2 that he didn’t know exactly what was said but that his son had responded to the neighbour.

The neighbour returned inside, shooting a gun through the front window of his home and hitting the six-year-old in the arm, according to Mr Daniel.

“He tried hitting me with a sledgehammer but that’s not going to work because I’m too fast. [Then he] got a gun and BOOM shot me right here,” the six-year-old Coby told Fox 2 , indicating the wounded spot.

The bullet went through his arm and he was quickly taken to hospital. Mr Daniel said the doctor told him that Coby would probably have died if the bullet had been an inch off in either direction.

Coby has since left the hospital and is thought to be okay.

The neighbour, identified as Ryan Le-Nguyen, was arrested by the Washtenaw County Sheriff and charged with assault with intent to murder.

“I’m trying to figure out he got a bond so low for trying to kill my kid,” Mr Daniel said, angry and confused.

Footage from a video doorbell shows Coby yelling out in pain after being shot and an older child shouting for somebody to call the police.

“Right now, he’s not even processing what happened. He doesn’t realize how close he came to not being here... but I realize it,” Mr Daniel said of Coby.

Mr Le-Nguyen made the bond on Tuesday and was picked up by family. He was ordered not to return to his home, but Mr Daniel remains worried.

“I’m scared for my family because I don’t know what he’s capable of,” he told Fox 2.

The officer of the prosecutor told the local TV station that they were shocked by the low bond. A motion to raise it has been filed.

The Independent has reached to the Washtenaw County Sheriff’s office for comment.

Family Worried That Neighbor Accused Of Shooting 6-Year-Old Boy Is Out On $10,000 Bond

According to The New York Post, Ryan Le-Nguyen of Ypsilanti Township, Michigan was arrested and charged with assault and intent to murder a 6-year-old boy who was retrieving his bike from the suspect’s front yard on Sunday. Le-Nguyen recently walked out of jail given a $10,000 cash bond and an...

PHOENIX, AZ – A armed black man holding a group of thieves at gunpoint was shot and killed by Phoenix Police officers who had no idea when they arrived on scene. Phoenix Police said this incident started when a Phoenix Police Officer observed an adult male, later identified as 39-year-old William Brookins, pointing a gun at a man and a woman. Those individuals had just robbed a local store and Brookins chased them down, hoping to be the hero at the end of the day. Instead, he was hospitalized for five days before succumbing to his injuries.

A little boy had no idea how close he was to death after a neighbor decided to shoot at him for parking his bike on his front yard and talking back to the man. According to the boy’s father, Arnold Daniel from Ypsilanti Township which is west of Detroit, his 6-year old son Coby Daniel happened to be riding his bike down their street, Candlewood Lane, while playing with friends in his neighborhood when his young life would soon be in danger.

A Black woman was with her two young children when pepper was thrown at her while leaving a pizzeria in Brooklyn, police said. The mom had her 5-month-old daughter and 4-year-old son with her at Not Ray’s Pizza when a white woman threw pepper from a shaker at her and called her the N-word in a racist rant. “Go back to your country,” the woman said. “You n-----s don’t belong here.” The NYPD released cellphone video of the ranting woman and are asking for help to identify her. The NYPD Hate Crimes Task Force is investigating.

Grandmother, 61, is shot dead in front of her daughter and eight-week-old grandchild after answering a knock at the front door of her home - as cops hunt for man behind 'targeted attack'

A grandmother has been fatally shot in the chest at close-range after answering the front door of her suburban home. Stacey Klimovitch, 61, was shot through the screen door of her flat in the Newcastle suburb of Stockton, two hours north of Sydney, at about 8pm on Wednesday night. The...

A 10-year-old boy was hurt after he and his father reportedly engaged in a drive-by shooting with paintball guns in Opa-locka, as reported by the Associated Press on Wednesday.

Investigators in Florida released body camera footage of deputies in a shootout with a 12-year old boy and 14-year-old girl. The Volusia County Sheriff's Office said the children shot at the deputies for more than half an hour Tuesday night, before the deputies returned fire. In the disturbing video, Florida...

A woman is faces neglect and drug charges after kids were found sleeping in a storage unit. Deputies say just after midnight Friday morning, they were doing a check at a storage facility on N. St. Joseph Ave. where they saw a woman and a child outside of one of the units.

11:20 AM PT -- 6/10 -- The angry neighbor who allegedly shot a 6-year-old boy is back in custody after a massive outcry over his initial release on a $10k cash bond. Prosecuting attorney Eli Savit joined us on "TMZ Live" Thursday and told us what it took to get the alleged gunman back behind bars ... and it sounds like the justice system moved swiftly here.

YPSILANTI, Mich. (FOX 2) - A boy from Ypsilanti Township is recovering after being threatened with a sledgehammer and then shot as he retrieved his bike from his neighbor's front yard. Arnold Daniel says his kids were outside on their bikes on Candlewood Lane in Ypsilanti Township when they stopped...

Yea, they probably didn't respect the neighborhood, but he really flipped his lid..... like move to another area, build a fence, set up cameras to support your claims... shooting a child was a low iq response, now he about to catch an attempted murder charge over a petty feud. Nah,...

The New York Police Department (NYPD) has released a security video footage that captured the chilling moment when a gunman opened fire, killing a 10-year-old boy, in Queens. The boy, identified by the police as Justin Wallace, was killed on Saturday night after being shot in front of a home on Beach 45th­ Street in Far Rockaway. His 29-year-old cousin, who was earlier identified as his uncle, was wounded as he was shot in the shoulder but is expected to survive. The footage released by the police showed an SUV driving by the house. A gunman, wearing a...

YPSILANTI TWP, Mich. (FOX 2) - A Washtenaw County judge has ordered that a man accused of shooting a 6-year-old boy in the arm originally held on a $10,000 bond to turn himself in and has increased his bond to $100,000. The judge ruled on Thursday, two days after Ryan...

MIDWEST CITY, Okla (KOKH) — A grandfather has been arrested after he shot his grandson in Midwest City. Police were called to a home on the 200 block of W. Campbell around 11:50 p.m. on June 13th. The caller, the boy's grandson, said the boy had been shot by her...

JACKSONVILLE, Fla. — A Florida teenager is facing charges after a 6-year-old boy fatally shot himself after authorities say he had left the gun out. The Jacksonville Sheriff's Office arrested the 14-year-old on Wednesday and charged him with culpable negligence, one day after investigators say Danny Waye III accidentally shot himself.

A Black woman who was a cashier at an Atlanta area supermarket was shot and killed for asking a customer to put on a face mask. LaQuitta Willis, 41, died on Monday in a triple shooting at the Big Bear Supermarket in Decatur, GA., according to DeKalb County police. The suspected shooter, 30-year-old Victor Lee Tucker Jr. of Palmetto, has been arrested and charged with murder and aggravated assault, according to ABC News.

Two people have been arrested in connection with the road rage shooting of a six-year-old boy last month in California.On Sunday, the California Highway Patrol (CHP) said it had arrested Eriz Marcus Anthony, 24, and Lee Wynne, 23, for the death of Aiden Leos on 21 May.He was fatally shot while sitting in a child seat in his mother’s car, driving northbound on the 55 Freeway in Orange County, California, to school, according to the Los Angeles Times.A white Volkswagen allegedly cut up Aiden’s mother, Joanna Cloonan, in what California Highway Patrol called an “unsafe lane change” and a...

Suspect in shooting of 6-year-old out on bond

Coby Daniel, 6, was shot in the arm, allegedly by an angry neighbor, Ryan Le-Nguyen last weekend in Ypsilanti Township. And the shooting is recorded on video.

A Florida sugar mill worker shot his employer, for whom he had been working for more than three decades, after learning that he was fired, authorities said. Felix Cabrera, 86, had asked his employer if he could continue working at the sugar mill for another year due to financial difficulties, but the employer replied “No,” the Palm Beach County Sheriff’s Office said on Friday, June 4.