By Bill Hutchinson
Posted by
ABC News
11 days ago 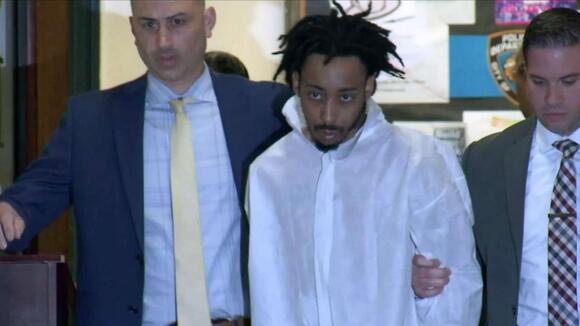 A suspect has been arrested in the fatal shooting of 10-year-old Justin Wallace in New York City, a crime that outraged residents and city leaders, and underscored an alarming spike in gun violence across the nation.

The suspect, identified by the New York Police Department as 29-year-old Javon Young, voluntarily surrendered to authorities Tuesday night, on what would have been Justin's birthday.

NYPD Commissioner Dermot Shea praised detectives who, he said, worked around the clock on this investigation "tirelessly seeking justice for an innocent 10-year-old boy."

Young was arraigned Wednesday in Queens Criminal Court on charges of second-degree murder, second-degree attempted murder, assault in the first degree and two counts of criminal possession of a weapon in the second degree. He was ordered to be held in jail without bail and faces a prison sentence of 25 years to life if convicted.

"There isn’t a parent alive who doesn’t mourn this family’s loss, another tragic result from gun violence," Queens District Attorney Melinda Katz said in a statement. "The defendant allegedly fired repeatedly into an occupied house, is now in custody and faces justice in our Courts.”

The alleged killer appeared stone-faced as two detectives walked him out of a police precinct Tuesday night and placed him in a car to be taken to the city's central booking facility.

Justin's death came amid a 70% surge in shootings in New York City in the first five months of 2021, compared with the same period as last year.

At least 131 children 11 years old or younger have died from gun violence this year across the U.S., and another 314 have been injured, according to the Gun Violence Archieve , a website that tracks shootings.

The fifth-grade student and a 29-year-old relative were shot around 9:30 p.m. on Saturday at a house in the Far Rockaway section in the city's Queens borough, police said. Assistant District Attorney Bryan Kotowski alleged that one of eight bullets Young fired hit Justin in the abdomen and tore through his heart and left lung. The boy was later pronounced dead at a hospital.

The prosecutor said Kyle Forrester, a relative of Justin, was shot three times in the back, once in the hand and once in the neck. He said Forrester is in a hospital in critical condition.

Kotowski said at least three witnesses identified Young as the gunman on the night of the shooting. He said Young was quickly detained and brought to a police precinct for questioning and was released.

But prosecutors said investigators determined that Young did not tell the truth about his whereabouts at the time of the shooting.

Young was arrested Tuesday when he voluntarily returned to the police precinct for a follow-up interview with investigators.

Police said Young drove up to the home, pulled out a gun and started firing from the bottom of the front stoop as Justin was standing at the front door getting ready to leave the home with his father.

Investigators are probing whether the shooting stemmed from an ongoing dispute, possibly over parking, authorities said.

Young's attorney, Beth Unger, said in court that Young never made any efforts to evade police and fully cooperated with investigators.

"It's my understanding that my client surrendered, and not only did he surrender, he had previously come to the precinct when requested by police and released, and then returned when police were looking for him," Unger said.

The NYPD released a security video Sunday afternoon that showed a dark-colored SUV driving slowly by the home. Moments later, the gunman, wearing a hooded sweatshirt and mask, is seen walking up to the house and firing up to eight shots from the bottom of the front stoop before running away.

Earlier this week, Mayor de Blasio visited Justin's parents at their home and vowed that the "cowardly, horrible human being who fired gunshots just randomly into a home" will face justice.

"He will suffer the consequences of what he did," de Blasio said.

Laurel Hubbard lifted a whopping 628 pounds in two lifts to qualify for her first Olympic Games. And when she competes in Tokyo next month, she will make history as the first openly transgender athlete ever to do so. Representing New Zealand, Hubbard will compete in the women's super-heavyweight 87-kg...

The White House on Monday announced where the U.S. would send 55 million additional COVID-19 vaccine doses allocated for other countries. The Biden administration had already committed these doses as part of a pledge to allocate 80 million by the end of June, and an initial 25 million doses, announced earlier this month, have "begun shipping," the White House said.

Local spectators will be allowed to attend the Tokyo Olympic Games despite fears around the Covid-19 pandemic, officials said Monday. Venues will be limited to 50 percent capacity, with up to 10,000 domestic fans able to attend events when the games open next month, organizing committee officials and the International Olympic Committee announced Monday.

A court in central Russia on Sunday arraigned a suspect on murder charges in the death of an American woman who was studying at a local university. The body of 34-year-old Catherine Serou was found Saturday in a wooded area near the city of Nizhny Novgorod, 250 miles east of Moscow. She had been missing since Tuesday.

American Airlines is canceling hundreds of flights for at least the next few weeks as a combination of factors threaten regular business operation. A heavy uptick in travel, labor shortages and weather are contributing to the cancellations, expected to last until mid-July at the earliest. "The first few weeks of...

Hard-line judiciary chief Ebrahim Raisi’s win in Iran’s presidential election last weekend was an unsurprising end to a process that had long seemed geared toward entrenching conservative rule in the Islamic Republic. The 60-year-old ultraconservative sailed through to a landslide victory Saturday, capturing nearly 62 percent of the vote and...

A man sought in the killings of his father and two other people at a casino campground and in a shooting at a marijuana dispensary in a small Oregon city turned himself in to police in Milwaukee, authorities said Sunday,. Investigators believe Oen Evan Nicholson drove the over 2,000 miles...

US extends Covid-19 travel restrictions with Canada and Mexico

(CNN) — The United States has extended Covid-19 restrictions on non-essential travel at land and ferry crossings with Canada and Mexico until July 21, according to a tweet from the Department of Homeland Security (DHS) on Sunday. "To reduce the spread of #COVID19, the United States is extending restrictions on...

James Michael Tyler, who starred as Gunther in 'Friends,' says he has stage 4 prostate cancer

(CNN) — "Friends" star James Michael Tyler has revealed he is battling stage 4 prostate cancer. The 59-year-old actor, who is best known for playing Gunther -- the Central Perk manager and Rachel's admirer -- on the hit '90s sitcom for 10 seasons, discussed his diagnosis during an appearance on NBC's Today Show Monday.