Posted by
Angela Kervorkian-Wattle
14 days ago 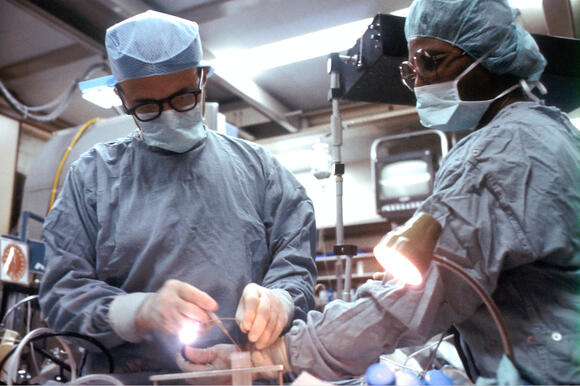 CLEVELAND — The University Hospitals Urology Institute is the first in Northeast Ohio to utilize a new method in diagnosing prostate cancer. This new method allows urologists to perform a prostate biopsy with a reduced risk of introducing bacteria than the traditional transrectal ultrasound-guided method. This older method has been in use for the past 30 years.

The new technique is called the PrecisionPoint™ Transperineal Access System (PPTAS) in conjunction with MRI-guided fusion technology. The method optimizes cancer detection and can be used in an office setting under local anesthesia or sedation. It is the first-ever FDA-cleared device that allows free-handed transperineal biopsy of the prostate.

UH Urology Institute urologic oncologist Jonathan Shoag, MD, is the first physician in Greater Cleveland to use PrecisionPoint. “This new technique may be the future of prostate cancer diagnosis.” He said.

Dr. Shoag is involved with a randomized clinical study with the expectation of yielding the highest level of evidence to evaluate the disadvantages of transperineal MRI-targeted biopsy.

With the transrectal approach, the biopsy needle passes (at least 12 times) from the rectum, which hosts a slew of bacteria, into the sterile prostate. This repetition is why it is risky, and it introduces bacteria into the prostate. Antibiotics are given beforehand to prevent infection.

Approximately 1 million prostate biopsies are performed each year in the United States. This volume is expected to increase considering the greater adoption of active surveillance.

“This is particularly important in African-American men, who are more likely than white men to die of prostate cancer, and also more likely to have anterior prostate cancers. Earlier and better detection of these anterior tumors with transperineal MRI-targeted biopsy may catch these cancers earlier when they are curable,” he continued.

CLEVELAND, OH — "1 Is Too Many" has established a partnership with the Resurrecting Lives Foundation to help veterans with post-traumatic stress disorder, traumatic brain injury, addiction, and suicidal ideation.

Solen Feyissa/UnsplashCLEVELAND, OH — Cleveland Clinic Children’s has been ranked among the country’s top 50 pediatric hospitals for 13 consecutive years. Last year the hospital ranked 2nd place in the nation by U.S. News and earned national recognition in all 10 specialties.

A doctor explains: Lung transplants and the pandemic

CLEVELAND, OH — The number of lung transplants for patients with severe COVID-19 cases increases during the pandemic. A transplant doctor explains the cause and how to protect yourself from the virus and it creates new challenges for doctors along the way.

CLEVELAND, OH — University Hospitals Parma Medical Center is verified as an official Level III Trauma Center exactly two years after it was given a provisional status. The verification was given by the Americal College of Surgeons or ACS.

CLEVELAND — The Cleveland Clinic has recently shared their research that provides insight into how the immune system protects the body after a confirmed COVID-19 infection. The study followed its caregivers over five months as the vaccination process was beginning. The data showed that the vaccine was highly effective in preventing COVID-19 infection.

CLEVELAND, OH - The Hopedale American Legion sponsors the 1st Annual PTSD Awareness Run which calls attention to 1 Is Too Many. It is an organization that is committed to reducing the number of veteran suicides down to zero by addressing the underlying issues that cause it.

Love journey during pandemic: Planning a wedding during COVID-19

Álvaro CvG/UnsplashCLEVELAND, OH — Are you planning to tie the knot this summer? Are larger gatherings permitted in your area? Or, should you keep your invitation list short? Don’t let such questions stop you from continuing your love journey with the loved ones. The same is true if you’re planning a bride or baby shower.

CLEVELAND, OH — Studies have shown great benefits for babies to be held immediately against their mother’s skin after birth. According to research, when babies are held skin-to-skin by their mothers, they tend to have more stable heart and breathing rates than those who are not. The heart sounds and breathing patterns from the mother also bring comfort to the babies immediately after birth.

CLEVELAND — A new study led by the Cleveland Clinic has identified mechanisms by which COVID-19 can cause Alzheimer’s disease-like dementia. The findings, published in Alzheimer’s Research & Therapy, show a link between COVID-19 and brain changes associated with Alzheimer’s disease. They could help inform risk management and therapeutic strategies for COVID-19-associated cognitive impairment.

CLEVELAND, OH — The natural wellness industry receives a significant boost when CBD, a non-addictive chemical extracted from hemp, entered the market. Now millions of people take CBD in a variety of forms.

How to treat and prevent burns

CLEVELAND — Summer is here, and when you’re doing your outdoor activities under the sun, unfortunate injuries may occur, including burns. Burns are skin injuries that heat, chemicals, or electricity can cause. Hot liquids from hot bath water, foods, and drinks are the most common cause of burns in children. During the summer, burns can also be caused by sun exposure, campfires, sparklers, and fireworks.

CLEVELAND, OH — Westlake High School’s TechMates Club and the Architectural Design Team were featured in the Ohio Technology and Engineering Educators Association News on May 26, 2021.

CLEVELAND — A novel innovation to treat lung cancer is currently being utilized at University Hospitals (UH) Cleveland Medical Center. Presently, around 80% of cases are discovered when they are already at an advanced stage. This issue leads to fewer options for treatments and more deaths caused by the disease.

COVID-19 rapid response fund to be distributed to three organizations

CLEVELAND — If you or a loved one has been the victim of rape or sexual abuse, the Cleveland Rape Crisis Center is here to help no matter how long ago the incident occurred. The foremost priority of the center is the health and safety of its clients. Therefore, the center is closely monitoring and following directions from the CDC and has placed these updated protocols at all its locations:

CLEVELAND — Cleveland MetroHealth Cancer Center will be hosting the 2021 Survivorship Symposium Art, Music, Meditation and Exercise to Cope with Cancer: During and After Treatment.

CLEVELAND — University Hospitals in Cleveland is one of Ohio’s major economic drivers, according to a recent study. A new economic impact report shows that it supports the economy of the state of Ohio to a significant degree. UH’s system of medical and health centers and physician offices has generated approximately 67,000 direct and indirect jobs, which in turn supports nearly 45,000 households.