EXCLUSIVE: SF mom robbed at gunpoint in own garage with husband asleep, kids in car 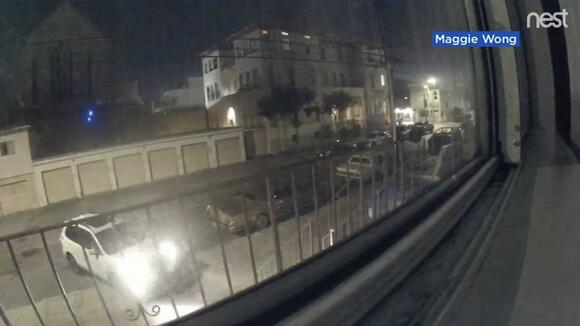 A San Francisco family was robbed at gunpoint inside their garage with their two children in the backseat coming home from a family dinner. It happened at 24th Street and Florida Avenue in the Mission Saturday just after 9:30 p.m. "We just pulled into the driveway," Maggie Wong told the I-Team's Stephanie Sierra. "It all happened within 50 seconds." EXCLUSIVE: Video shows man held at gunpoint after robber follows East Bay family home, police say Wong's husband Jason was asleep in the passenger seat. Maggie walked to the trunk to get their belongings when a young man wearing a surgical mask walks into her garage and pointed a gun at her face. "I freaked out and started shaking," Wong said. "He said you must have a wallet, where's your wallet?" Wong screamed when she saw the gun and quickly scrambled through her diaper bag to find her wallet. "I gave it to him as fast as I could." Jason says he woke up to her scream and the gun pointed at his face through the window. "I opened the door hand him $400 cash because I had just been to the bank," he said before the robber demanded his phone. VIDEO: EXCLUSIVE: Family of 18 records video of attempted robbery along Fisherman's Wharf

An Asian American family visiting San Francisco from Wisconsin was targeted in an attempted robbery in Fisherman's Wharf. They're sharing their story now to raise awareness and to speak out against one suspect who was on probation and wielded a gun.

Jason attempted closing the garage door, which he says spooked the robber who ran away. The family was just grateful to be alive. "It's so sad this is the San Francisco we are living in," Wong said. "Are we just going to continue living in fear?" The Wong's aren't alone. According to SFPD, there have been 953 robberies reported across the city since January. That's a 14-percent decrease from this time last year, but police say crime is starting to pick back up. EXCLUSIVE: Asian woman brutally attacked at gunpoint, robbed after being followed in SF "We do see these pockets of crime increasing in some areas," said SFPD Deputy Chief David Lazar, who oversees the patrol operations at 10 stations across the city. According to Lazar, robberies are increasing in many areas, but especially in the Mission, Bayview, and Tenderloin districts. "We're seeing robberies happen in heavily populated areas as we come out of this pandemic and the city starts to get more populated," Lazar said. "We're seeing a lot more people here on the weekends and at night there's more traffic." Lazar says the department is doing what they can to increase patrols in high-traffic areas like Union Square. "What we're doing is really working to have high visible coverage at all times in the main corridors, the downtown areas, areas where people are coming out post-COVID," he said. But, the department is struggling with a staffing shortage of around 200 officers. Wong worries it won't change enough. "Families are leaving the city," she said. "Now, I understand why."
View All 67 Comments

'It's about time': Bay Area celebrates Juneteenth as national holiday for 1st time

"This is the day that our ancestors got to be freed from being slaves," said Mills reflecting on the sacrifices her grandmother made. "We're still working towards freedom, but we're a lot further than she was."