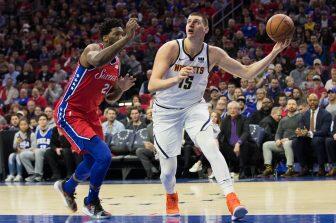 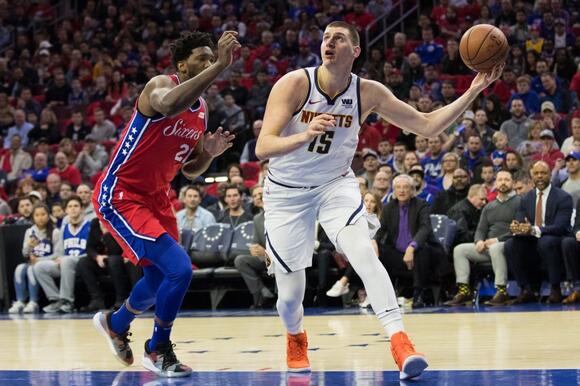 The 2021-22 season has been interesting from an individual player perspective. Reigning NBA MVP Nikola Jokic continues to play great ball and is considered a top-end candidate to go back-to-back.

Other top candidates have struggled to remain healthy, including the likes of LeBron James and Kevin Durant . It has left for a wide open race. As we have done all season, here’s our latest NBA MVP rankings coming out of the All-Star Break .

At 33-25, the Nuggets are coming on strong despite the absences of Jamal Murray and Michael Porter Jr. Why? The performance of reigning NBA MVP Nikola Jokic. The big man has been on an absolute roll this season, averaging 26.0 points, 13.8 rebounds and 7.9 assists on 57% shooting.

Jokic’s performance against another MVP candidate in that of Stephen Curry leading up to the All-Star Break has him as the favorite right now. The big man scored 35 points while grabbing 17 rebounds and dishing out eight assists in a Nuggets road win .

Ben Simmons, who? Embiid has his 76ers playing stellar basketball with his now-former teammate sitting out the entire season prior to that blockbuster trade with the Brooklyn Nets . Philadelphia currently sits at 35-23 and as the third seed back east. For his part, Embiid has been dominating recently — averaging 33.4 points, 11.5 rebounds and 4.7 assists since the day after Christmas.

We’re highly intrigued to see how Embiid meshes with new teammate James Harden moving forward. In reality, it should be a better fit for Embiid. If so, he’ll walk away with his first ever NBA MVP award.

Since returning from a COVID-mandated absence, Antetokounmpo is averaging 32.2 points, 10.9 rebounds an 6.3 assists on 57% shooting in 23 games. More recently, the Greek Freak scored 50 points in a win over the Indiana Pacers leading up to the All-Star Break.

The question now becomes whether the defending champion Bucks can make a move back east in order to help Giannis out. They are currently the fifth seed in the Eastern Conference and have lost three of their past four.

Watch Live Sports On Sling TV Today! Get ESPN For Free And More!

At 32 years old and in his first season with Chicago, DeRozan is in the midst of a career-best performance. He’s also utilizing an all-around game to help the Bulls ascend the Eastern Conference standings while putting up eye-opening numbers. DeRozan just became the first Bulls player in 25 years to drop a total of 50 fourth-quarter points in three games.

More recently, DeRozan has been on an absolute roll. That included him averaging 38.6 points, 5.7 rebounds and 5.6 assists on 61% shooting in the seven games leading up to the All-Star Break. Craziness!

This two-time NBA MVP was in the midst of one of his most prolonged slumps ever in January. Curry averaged 22.9 points on 39% shooting, including a 33% mark from three-point range. He was pressing big time. Perhaps, that changed once February started with Chef cooking. He’s averaging 26.4 points and 6.8 assists on 40% shooting from distance over the past eight games.

Fresh off a history-making performance in the All-Star Game, Curry will look to keep it going once the Warriors start the second half of their season. He has Klay Thompson back at full strength with Draymond Green potentially nearing a return.

We’re running out of expletives to explain how good Morant has been this season. He has Memphis at 41-19 and with recent victories over the Suns, Nets and Warriors mixed in. Since returning from injury , Morant is averaging 28.4 points, 6.3 rebounds and 6.8 assists on 50% shooting. Memphis is 21-7 during that span.

Check Out: Watch the NBA on one of these amazing 65-inch 4k smart TVs

After a slow start to the season, Doncic has picked it up big time recently. Not only does he have Dallas at 35-24, the stud guard has improved in each category as the campaign advances. The kid is averaging 33.3 points, 10.3 rebounds and 9.3 assist on 41% shooting from distance over the past 15 games .

With Dallas ascending the Western Conference rankings recently, there’s every reason to believe that Luka will become a top-end MVP candidate moving forward.

We previously had Booker’s teammate, Chris Paul, as a contender for this award. But it’s too hard to ignore just how good this two-guard has been for the NBA-best Suns. It’s insane what he’s done recently, averaging 29.4 points, 4.8 rebounds and 4.5 assists over the past 18 games. It’s not a coincidence that the Suns are 17-1 during that span.

From an individual perspective, Booker will have a chance to become a realistic NBA MVP candidate moving forward with Chris Paul sidelined at least the next six weeks to injury .

Sure Towns’ defense leaves a lot to be desired. But we’d be hard-pressed to ignore just how much of a difference he makes on the offensive end of the court. The All-Star is averaging 24.4 points, 9.7 rebounds and 4.0 assists on 52% shooting this season. He also has Minnesota in the midst of a stretch that has seen it win seven of 10.

After some major struggles to open the season for the Celtics, Tatum helped this squad turn it around heading into the All-Star Break. That included 17-5 record over the final 22 games. Equally as important as Boston’s defense during this span , Tatum’s scoring punch helped big time. He averaged 26.1 points to go with 8.0 rebounds and 4.8 assists on 47% shooting during that 22-game span.

The Golden State Warriors are on the verge of booking a return trip to the NBA Finals, which is a testament to the dominance of this team with Stephen Curry, Klay Thompson, and Draymond Green at the core. But Steve Kerr’s role in the team’s success can’t be overlooked, and in one moment during the final stretch of the Warriors’ 109-100 win in Game 3 over the Dallas Mavericks, he showed who’s really in charge by blasting his team’s best player for a defensive lapse that led to a Luka Doncic triple.
SAN FRANCISCO, CA・1 DAY AGO
Sportsnaut

Despite trading C.J. McCollum back in February, the Portland Trail Blazers are not expected to go into full-scale rebuild mode.
PORTLAND, OR・22 HOURS AGO
Sportsnaut

The Miami Heat are attempting to take a 3-1 series lead on the road in Game 4 of their Eastern
BOSTON, MA・16 HOURS AGO
Sportsnaut

If the Boston Celtics are going to tie up their Eastern Conference Finals series against the Miami Heat, they’ll have
BOSTON, MA・18 HOURS AGO
Sportsnaut

Our MLB Games Today schedule is back for the 2022 MLB season. Major League Baseball ended its lockout, officially clearing
MLS・5 HOURS AGO
Sportsnaut

The Miami Heat had an absolutely disastrous performance against the Boston Celtics in Game 4 of their NBA Eastern Conference
BOSTON, MA・2 HOURS AGO
Sportsnaut

Now that the 2021-22 postseason is in full bloom, it’s time to check in on our NBA Playoff predictions with
MEMPHIS, TN・20 HOURS AGO
Sportsnaut

When the Minnesota Timberwolves made the decision to part ways with Gersson Rosas just before the start of the 2021-22
MINNEAPOLIS, MN・22 HOURS AGO

Bulls, Pistons to play in Paris next season

The Chicago Bulls and Detroit Pistons will play a regular-season NBA game in Paris next season. The game will be
DETROIT, MI・1 HOUR AGO
Sportsnaut

With 36-year-old Candace Parker playing at a high level and Kahleah Copper back in the mix, the Chicago Sky appear
CHICAGO, IL・22 HOURS AGO
Sportsnaut

Few players have put themselves on the map like Jalen Brunson has for the Dallas Mavericks during their playoff run.
DALLAS, TX・1 DAY AGO
Sportsnaut

Liberty, Lynx both looking for a lift

This isn’t the start the New York Liberty envisioned, but a four-game losing streak, including consecutive blowout losses, and a
MINNEAPOLIS, MN・20 HOURS AGO
Sportsnaut

The Minnesota Timberwolves finalized a five-year deal with Denver Nuggets president of basketball operations Tim Connelly to have him lead
MINNEAPOLIS, MN・21 HOURS AGO
Sportsnaut

Jayson Tatum recorded 31 points, eight rebounds and five assists as the Boston Celtics dominated from the outset while notching
BOSTON, MA・14 HOURS AGO