By Vincent Frank
Sportsnaut
8 days ago 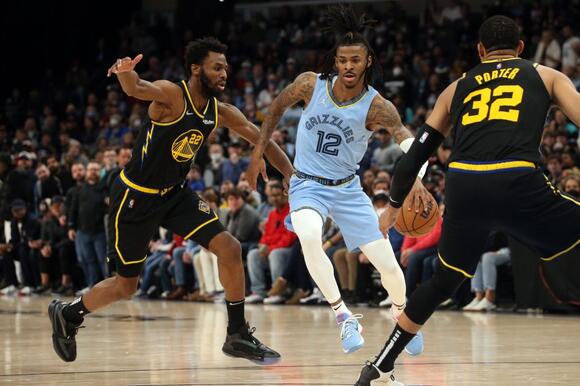 The 2021-22 season has been derailed to an extent by COVID-19 with multiple NBA MVP candidates finding themselves sidelined. It makes things difficult when attempting to rank the top candidates. But as we have done every week since the regular season started, let’s delve into it here.

Related: Everything you need to know about the 2021-22 NBA season

Since returning from a COVID-mandated absence, Antetokounmpo is averaging 32.9 points, 11.0 rebounds and 6.6 assists while shooting 58% from the field. In the past 21 games Giannis has played, the Bucks are 16-5. That seems good, and it has him atop our most-recent NBA MVP rankings.

We couldn’t care less that the Nuggets find themselves at a pedestrian 20-19 on the campaign. This is what happens when two All-Star caliber players in Jamal Murray and Michael Porter Jr. are sidelined. Simply put, the reigning NBA MVP has been all sorts of brilliant this season. We’re talking off the chart numbers (25.7 PPG, 14.1 RPG, 7.0 APG, 56% shooting).

Despite Golden State boasting a 30-10 record, Curry has struggled big time recently. The two-time NBA MVP is shooting a mere 35% from the field, including a 30% three-point mark over the past seven games. Though, it does appear that the return of Klay Thompson has helped him. In the two games that his Splash Brother partner has returned, Curry is averaging 27.5 points.

With Kyrie Irving now back, Durant gets more help for the 25-14 Nets. Unfortunately, things have not gone great amid his return. Including a 1-1 mark in Irving’s two games, the Nets have lost five of their past seven. That’s not for a lack of production in Durant’s part. The former NBA MVP is averaging a resounding 31.8 points to go with 7.9 rebounds and 6.3 assists on 48% shooting over the past 16 games. Whew!

We’re running out of expletives to explain how good Morant has been this season. He has Memphis at 29-14 and in the midst of a 10-game winning streak with victories over the Suns, Nets and Warriors mixed in. During that span, Morant has been absolutely electric — averaging 27.9 points, 6.2 rebounds and 6.4 assists on 52% shooting. That’s just insane.

At 32 years old and in his first season with Chicago, DeRozan is in the midst of a career-best performance. He’s also utilizing an all-around game to help the Bulls ascend the Eastern Conference standings while putting up eye-opening numbers. DeRozan just became the first Bulls player in 25 years to drop a total of 50 fourth-quarter points in three games. The veteran has also been dominant since returning from COVID — averaging 25.7 points, 5.0 rebounds and 6.3 assists on 48% shooting in 11 games.

Despite missing 12 of 41 games due to injury or COVID-19, King James’ rightful place as an MVP candidate has been resurrected. Even at the advange age of 37, the four-time NBA MVP has been playing some of his best ball (that’s not hyperbole). While the Lakers remain mediocre, he’s averaging 28.9 points, 7.4 rebounds and 6.6 assists on 53% shooting this season. Did we mention James is 37?

Opposing Western Conference teams have to be asking if this dude will ever go away. With his Suns 31-9 on the season, CP3 has been the primary reason why. First off, the Suns are plus-210 when he’s on the court during that span. Secondly, he is a top-end NBA Defensive Player of the Year candidate — ranking in the top 10 in all four major advanced stats. If that weren’t enough, Paul is averaging an NBA-high 10.1 assists to go with 2.0 steals per game. Yeah.

Here, we replace Rudy Gobert with his teammate in Salt Lake. There’s an obvious reason for this. Utah’s recent play has coincided with Mitchell upping his game to new heights. The Jazz have won 12 of 15 games by a combined margin of 184 points. Mitchell is averaging 28.8 points, 3.2 rebounds and 5.2 assists on 51% shooting during that span. Whew!

Yet another player who just returnd from the NBA health and safety protocols, Allen has been an absolute force in his first full season for the surprising Cavaliers. Still only 23, he’s averaging 16.9 points and 10.9 rebounds on 70% shooting from the field. Allen ranks No. 3 in the NBA in defensive win shares and No. 5 in defensive rating. He’s coming alive and entering superstardom right in front of us.

The Phoenix Suns are steamrolling the NBA once again. They became the first team to win 30 games this season due to their elite offense and even better defense. It’s not a matter of if, but who on Phoenix’s roster gets named an All-Star. Devin Booker has been...
PHOENIX, AZ・13 DAYS AGO
Sportsnaut

NBA power rankings: Now that the NBA season is in full swing, it’s time to rank all 30 teams. With
NBA・1 DAY AGO
Sportsnaut

Bookmark. Save. Favorite. Do your thing. This is the one-stop-shop for everything NBA schedule-related heading into the 2021-22 season: Get
NBA・16 HOURS AGO
Sports Illustrated

Analysis and bets for Tuesday's games featuring the Timberwolves visiting the Knicks and the Warriors welcoming the Pistons.
NBA・2 DAYS AGO

First-place Phoenix travels to take on a surging Dallas team and Indiana draws Golden State on the second night of a back-to-back.
NBA・11 HOURS AGO
FastBreak on FanNation

Devin Booker, Chris Paul and the Phoenix Suns are in Dallas to play the Mavericks.
NBA・4 HOURS AGO
Sportsnaut

The Phoenix Suns look to complete a perfect five-game road trip when they visit the Dallas Mavericks on Thursday night.
NBA・21 HOURS AGO

Deandre Ayton has been ruled out for Thursday's game between the Phoenix Suns and Dallas Mavericks in Texas.
NBA・23 HOURS AGO
FastBreak on FanNation

The Phoenix Suns are in Dallas to play the Mavericks on Thursday night.
NBA・5 HOURS AGO
fadeawayworld.net

When it comes to basketball, Ben Simmons has been dealing with a surplus of issues, most of which are directly related to his messy breakup with the Philadelphia 76ers. After months of trade demands, the team has tried to make him return, and Simmons has sacrificed millions to ensure that doesn't happen.
CELEBRITIES・19 DAYS AGO
charlottenews.net

The wife of NBA legend Steph Curry has called the gossip 'ridiculous'. The wife of Golden State Warriors star Steph Curry, Ayesha, has addressed rumors that the couple is in an open relationship, labeling the speculation 'disrespectful'. Claims circled on gossip blogs in recent weeks and cited an anonymous tip...
CHARLOTTE, NC・9 DAYS AGO

While the Boston Celtics have been on somewhat of a hot streak through the first half of January, winning six of their10 games played thus far into 2022, for the most part, it has appeared as though with every positive step forward this team takes they end up following it up by then taking two steps back and now, as a result of Wednesday’s underwhelming loss to the Charlotte Hornets, they find themselves back to boasting just a measly .500 record of 23-23.
NBA・12 HOURS AGO
Sportsnaut

Bookmark. Save. Do your thing. We will be providing constant updates on this page as it relates to the biggest
NBA・2 DAYS AGO
FanSided

Ja Morant, budding superstar for the Memphis Grizzlies, has been playing at a phenomenal level this season. He’s made a massive leap from year two of his career to year three and his NBA peers have taken notice. One peer in particular is Golden State Warriors forward Draymond Green,...
NBA・1 DAY AGO
Audacy

A potentially major development occurred in the Los Angeles Lakers’ 111-104 loss to the Indiana Pacers on Wednesday. With 3:52 left in the fourth quarter, head coach Frank Vogel deployed Malik Monk onto the court, taking Russell Westbrook out of the game in crunch time — an adjustment rarely seen in the first half of the 2021-22 season. About four minutes earlier, L.A. had lost its lead that they held onto for the majority of the game.
NBA・6 HOURS AGO
FastBreak on FanNation

The Golden State Warriors are hosting the Detroit Pistons on Tuesday evening, and the Warriors shared an awesome photo of Klay Thompson and Steph Curry.
NBA・2 DAYS AGO
Sportsnaut

This week, King James made history by becoming the first player to reach the milestones of 30,000 points scored, 10,000 rebounds hauled in, and 9,000 assists doled out.
NBA・14 HOURS AGO