By Schuyler Callihan
Posted by
MountaineerMaven
2021-06-08 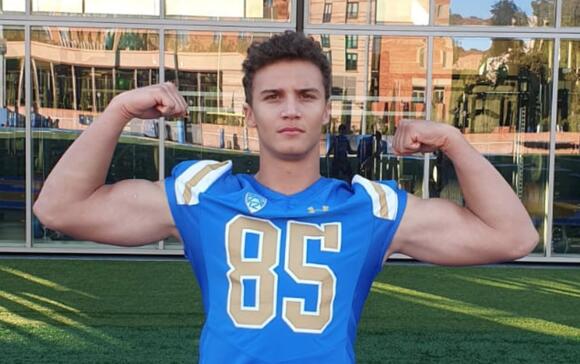 The West Virginia coaching staff has taken a different approach to recruiting. Over the last couple of years, the Mountaineers have signed multiple international recruits including DL Akheem Mesidor (Canada), TE Victor Wikström (Sweden), DE Edward Vesterinen (Finland), and CB Jaïro Faverus (Netherlands). You can even throw in S Alonzo Addae (Canada) who transferred in from New Hampshire a couple of years ago.

PPI Recruits is the #1 recruiting database/placement program for International American Football Players which is run by Brandon Collier. Since Neal Brown and his staff have been in Morgantown, he has invited Collier to bring some international players to summer camps to get a look at these kids up close and potentially extend an offer.

Collier brought several players to Morgantown this week, one of which is class of 2022 tight end Philip Okonkwo (6'5", 245 lbs) of Germany. So far Okonkwo holds offers from Central Michigan, Eastern Michigan, and Florida Atlantic. As the summer moves along, you can expect that count to grow.

Tuesday evening, Okonkwo caught up with Mountaineer Maven to discuss how the camp went and what he thought of the trip in general.

"The jetlag hit pretty hard during the camp. Overall, we traveled about 15 hours yesterday," Okonkwo said. "The camp itself was pretty good. I liked the vibe of it not being in a huge town and it had some nature in it which I liked."

Early on, Okonkwo got a feel for the hospitality that the coaching staff provides when he first arrived on campus.

"[Grad assistant] Ty Murphy was super kind and picked me up somewhere on campus after I got lost. He showed me around a little bit but I definitely spent the most time with Coach Trickett. He was with me during the whole camp and he gave me good feedback after every route and stuff like that. I really appreciated him."

Tight ends coach Travis Trickett has done a phenomenal job on the recruiting trail over the last couple of years and played a big part in Victor Wikström coming to WVU. Having multiple international players already on the roster is something that is appealing to Okonkwo.

"I know Victor [Wikstrom] and Jairo [Faverus] through PPI. They didn't tell me anything specific yesterday but I know that they love it there. It was just really great seeing them again, to be honest. I got to meet Edward [Vesterinen] today, he's a really nice guy. I think it makes it easier in the sense that you can see this school is open to international athletes and that's really good to know."

Okonkwo is now headed to participate in a camp at Ohio State and will be traveling to several other schools throughout the month with PPI.

ESPN college football analyst Paul Finebaum has made a rough prediction for Urban Meyer‘s future in the National Football League. Meyer is entering his first season as an NFL head coach. He was hired by the Jacksonville Jaguars to lead the AFC South franchise into postseason contention. Meyer has several promising players in Jacksonville, including No. 1 overall pick Trevor Lawrence.

Clemson coach Dabo Swinney met with the media as part of South Carolina Coaches for Charity event Tuesday evening and he was asked a plethora of questions. One of the most intriguing answers given by Dabo Swinney, though, had to do with his thoughts on conference realignment. Swinney said he...

Considering his history coaching against Texas and Oklahoma, there may not be a better active coach in the SEC to ask about expansion than Mike Leach. Long before taking over at Mississippi State, Leach was the head coach of Texas Tech from 2000-2009, during which time Leach led the Red Raiders to their finest moments in the Big 12.

This year’s college football offseason has been dominated by talks of conference realignment. And with Oklahoma and Texas set to be welcomed into the SEC, why not throw some other big-time names into the mix?. ESPN college football analyst David Pollack believes the Clemson Tigers should be the next team...

Class of 2023 WVU commit James Okonkwo (6'8", 210 lbs) of Beckley Prep will reclassify and will be a part of the WVU program this upcoming season with the intentions of redshirt, per a report from Greg Carey of MetroNews. Okonkwo just finished up his sophomore year so he will be skipping the final two years of his high school career as mentioned in Carey's report.

One of the top recruits of the Herm Edwards and Antonio Pierce is moving on. On Thursday, Arizona State defensive lineman Stephon Wright entered the NCAA Transfer Portal. Wright only played six games in his two seasons in Tempe. He recorded only one tackle in that time. Injuries limited Wright to four games in 2019 and two contest last season as he has had surgeries on both of his shoulders since coming into the program.

What will SEC look like with Texas, Oklahoma? Mike Leach has ideas, unique perspective

Everyone is talking about Oklahoma and Texas moving to the SEC, even former Florida Football coach Steve Spurrier, who doesn’t sound like a fan. Just about every college football fan, pundit, player, and coach has an opinion on the move by Texas and Oklahoma to join the SEC and on Thursday, former Florida football coach Steve Spurrier offered his two cents on the matter.

While most associated with the Southeastern Conference are thrilled to see Texas and Oklahoma join the league, Trevor Knight is sticking true to his Aggie roots and has mixed feelings about the move. Knight is a proud Aggie after finishing his college career in College Station as a member of...

No. 4 Ohio State: Maybe it's the start of the C.J. Stroud era for the Buckeyes, maybe not

The Ohio State coach knew he had a special team, potentially a "once-in-a-lifetime" one, as he put it. That's in part why he was so frustrated when it looked like the Buckeyes wouldn't have a season and why he fought for one. Training camp for the 2021 season opens Aug....

Gators eager to show UCF who runs the state of Florida

Linebacker Ventrell Miller and defensive end Zachary Carter may not be on the team when Florida finally takes on UCF in 2024, but it didn’t stop them from sounding off on a potential future series with the Knights. The Orlando Sentinel reported June 12 that the two squads are close...

Many college athletes have been busy since the name, image and likeness (NIL) ruling went into effect on July 1, including Arizona State quarterback Jayden Daniels. Daniels signed his second NIL deal with Venezia’s Pizzeria on Tuesday as he continues to spread his brand. The deal includes his very own...

Okonkwo a promising signing for Huggins

MORGANTOWN, W.Va. (WV News) — Two years ago, Jalen Bridges, a highly sought-after recruit out of Fairmont Senior, was headed toward a year of prep school before entering West Virginia University, where he had committed to play for coach Bob Huggins. The veteran coach, however, convinced Bridges and his family...

Mike Leach on Nick Saban: "Everybody respects what he's done"

HOOVER, Ala. — When it comes to prevalent coaches in college football, Mississippi State's Mike Leach and Alabama's Nick Saban are unquestionably two of the names most often mentioned. Answering questions at his first SEC Media Days, Leach was asked if Saban was the person to credit for the escalation...

Football Time in Tennessee is nearly here as the Vols start preseason practice next week ahead of the 2021 season, the program's first under new head coach JoshHeupel. With a new coaching staff and a new-look roster after sweeping changes throughout the offseason, Tennessee isn't lacking in unknowns and questions to answer in the weeks leading up to the Thursday night opener against Bowling Green on Sept 2. Before the Vols hit the practice field on Aug. 4, GoVols247 will break down some of the biggest storylines to watch next month.

ARLINGTON, Texas — Like every coach in the nation, West Virginia football head man Neal Brown has found his attention pulled in many different directions over the past year and a half. Between social injustice issues, heightened political tensions, the Name, Image and Likeness universe and a global pandemic, his time has been stretched in many different ways – all of them away from the football field.