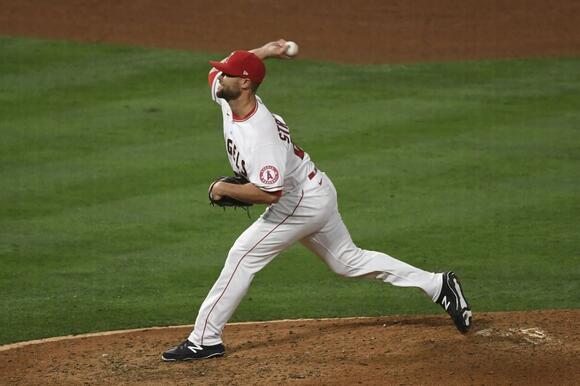 Strickland, 32, was 0-0 with a 9.95 ERA in nine relief appearances with the Angels. He allowed nine runs (seven earned) on 11 hits in 6 1/3 innings after the team acquired him from Tampa Bay last month.

The Angels promoted right-hander James Hoyt from Triple-A Salt Lake to take Strickland’s spot on the roster. Hoyt pitched 1 2/3 scoreless innings in two appearances with Los Angeles earlier this season, and he has a career record of 4-1 with a 3.64 ERA in 100 relief appearances.

The Los Angeles Angels have been the talk of baseball because of pitcher/designated hitter/outfielder Shohei Ohtani. However, let’s not forget about star outfielder Mike Trout. Oh yes, Trout is arguably the best player in baseball. Unfortunately, he has been out since May 17 as he continues to rehab his injury.

Although the Los Angeles Dodgers did not have a participant in the 2021 Home Run Derby, this year’s event still featured some of the biggest sluggers in all of baseball, including L.A. Angels two-way star Shohei Ohtani. Ohtani earned the No. 1 seed after concluding the period for which the...

A member of the Wichita State Shockers baseball team is now a professional baseball player and he’s beginning his journey to the major leagues. Wichita State junior infielder Paxton Wallace has joined the Los Angeles Angels organization on an undrafted free agent contract, according to Wichita State. Wallace, a third...

LA Angels: 3 outfielders to trade for and pair with Mike Trout

The Minnesota Twins (42-56) host the Los Angeles Angels (47-49) Saturday at Target Field for the third game of their four-game series. First pitch is scheduled for 7:10 p.m. ET. Let’s analyze BetMGM Sportsbook‘s lines around the Angels vs. Twins odds with MLB picks and predictions. These teams split the...

According to an ESPN article that came out Friday afternoon, Major League Baseball’s attempt to raise Minor League player’s salaries by cutting down on the number of teams is not working. At least it’s not working for the Angels minor league organization. The ESPN article has an interview with Rocket...

Angels’ Mike Trout gets positive news from tests on his calf

ANAHEIM — Mike Trout got more encouraging news on Thursday, but it wasn’t enough to provide any more clarity on when the Angels star will be back on the field. Trout saw a doctor and underwent scans, which showed continued healing, Manager Joe Maddon said. “Everything was good and it’s...

MADISON, Alabama – On Friday night, the Los Angeles Angels announced former Rocket City Trash Pandas pitcher Reid Detmers has been promoted to the Angels and will make his MLB debut on Sunday against the Oakland A’s at Angel Stadium. Currently ranked as the Angels No. 2 prospect and No....

Left-hander Sam Selman, who was acquired in a trade by the Los Angeles Angels on Friday, was added to the

The Los Angeles Angels will play the first installment of their four-game series against the Texas Rangers in Globe Life Field, Arlington, on Tuesday, August 3, 2021, at 8:05 PM (EDT). After an 8-3 defeat to the Oakland Athletics, the Los Angeles Angels are one matchup under .500 at 52-53. Los Angeles’ Reid Detmers took the mound versus Oakland and gave up six runs on six hits in 4.1 innings of work, taking the defeat. The bullpen for Los Angeles faltered as well, allowing two runs on five hits in the final 4.2 innings of the match. Los Angeles ranks 4th in the AL West at 52-54.

Jack Mayfield homered for the second straight night and Shohei Ohtani pitched six innings of one-run ball as the Los Angeles Angels beat the Texas Rangers 2-1 on Wednesday in Arlington, Texas. Mayfield had three hits in the No. 9 spot for the Angels, who improved to 4-25 when scoring...

Dodgers sign former Rookie of the Year to bolster bullpen

2021’s been a year of bullpen lottery tickets for the Dodgers, a team that sits near the season’s midpoint with just about half of them cashed out. Jimmy Nelson? Very valuable, and made quite the statement over July 4 weekend. Phil Bickford wasn’t a major part of anyone’s plan, but he, too, has impressed.

An incredible first pitch thrown out at the San Diego Padres game is rightfully going viral on social media this weekend. Demi Bagby, a 20-year-old crossfit athlete and body builder, threw out the first pitch at the Padres vs. Rockies game earlier this week. It is arguably the most impressive...

What’s the best “first pitch” you’ve ever seen at a baseball game? Whatever it is, it probably isn’t topping the one thrown by Demi Bagby at a recent San Diego Padres vs. Colorado Rockies game. Bagby’s first pitch is being deemed by many to be the “greatest first pitch in...

The powder keg finally went off on Wednesday. For the first time since it was discovered that the Houston Astros were involved in a sign stealing scandal during 2017, they faced the Dodgers, in front of fans, at Dodger Stadium. You’ll remember that in 2017, the Astros won the World Series in seven games. Their opponent? The Dodgers.

The Los Angeles Dodgers completed their comeback with a thrilling walk-off win against the San Francisco Giants, but saw Justin Turner and Max Muncy removed early in the process after both were hit by a pitch from Alex Wood in the third inning. Wood plunked Turner on the outside of...

Astros: Yordan Alvarez is the only thing stolen from the Dodgers

It was another hectic night for the Houston Astros, as the boys in orange entered a hostile atmosphere at Dodger Stadium. Lance McCullers Jr. was dealing, while Los Angeles Dodgers‘ fans were hurling beers through the stands hitting anyone who stood in their way. It has been four years since...