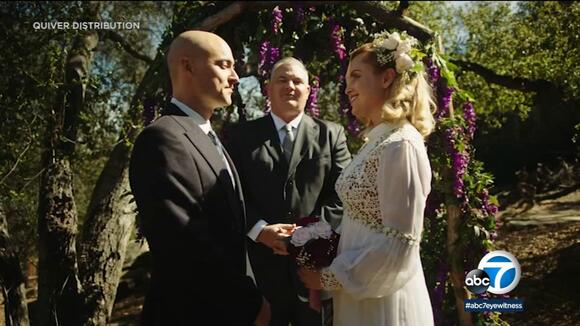 The new movie "Grace and Grit" is based on the true story of philosopher Ken Wilber and his wife, Treya. They met in 1983, calling it love at first touch. Then 10 days after they were married, Treya got the news she had stage 4 breast cancer. They spent the next five years doing everything they possibly could to save her. Mena Suvari and Stuart Townsend star in the film. "One of the reasons I loved the story so much is because it wasn't just sort of a simple love story, boy meets girl and happy endings ... they both get broken open," said Townsend. "It's really just a showcase of them trying whatever would have possibly worked or made any difference," said Suvari. "What an incredible opportunity to tell such a beautiful story. But I think the most challenging role, you know, I'll ever play." "I'm excited for the film to come out so that people can maybe gain some guidance or gain some comfort by watching this film," said Townsend. "You know, if you're really lucky ... you get your heart broken, and that's what this story is." "Grace and Grit" is in theaters, on digital and on-demand now.

While many subscribers have tuned in to the Netflix series, How to Sell Drugs Online (Fast), few may have realized that the German-language original is based on a true story. The show tells the story of a booksmart teenager, Moritz Zimmermann (Maximilian Mundt), and his best friend, Lenny Sander (Danilo Kamperidis), who begin to sell drugs to impress Moritz's ex-girlfriend.

Based on a true story about the bullying of a gay teenager and its tragic consequences, the drama "Joe Bell" has a message to deliver. That message, which is good and necessary - urgent even - isn't simply the point of this well-meaning movie. It's the whole plot, which follows the teenager's father, played by Mark Wahlberg, as he undertakes a mission to raise awareness about the effects of homophobia by walking across America while giving speeches. But as delivered by this film and its titular main messenger, those words feels less vital than perfunctory, more preachy than truly, deeply felt.

Adam Robitel’s 2019 B-movie horror flick “Escape Room” had all the auspices of a flash in the pan: early January release and a gimmicky premise based around a live entertainment trend. “Escape Room” was just that: a series of high-stakes, life-or-death puzzles, but thanks to the cast and characters, plus a fantastic final girl in Taylor Russell, it worked. Operating in the mode of the “Saw” and “Final Destination” franchises, there could be a long future for “Escape Room” movies, and the sequel, “Escape Room: Tournament of Champions,” even leaner and meaner than the first, proves the staying power of this budding series. There’s no other way to say it: this movie rips.

Zack Stentz Will Pen First Movie in Big-Screen The Wheel of Time Trilogy. It appears that Robert Jordan’s The Wheel of Time is the next big franchise in the fantasy genre. Not only are Amazon Studios developing a TV series that’s supposed to debut later this year, but there is also a trilogy of feature films coming the fans’ way. Recently, the first of three The Wheel of Time movies found its writer, as Zack Stentz has joined the project. Stentz’s credits include Thor and X-Men: First Class. He will now work on the script for Age of Legends.

‘Age of Legends’ Will Bring ‘The Wheel of Time’ to the Big Screen, Even as Amazon Makes a TV Series

Sony Pictures Television and Amazon are already teaming up to make a Wheel of Time series based on the massive fantasy saga by author Robert Jordan, but now a movie is also in the works that’s set thousands of years before the events of those books and will complement the storylines in the upcoming show. We’ll get into the details below, but to put this decision in context, this would be like a studio deciding to make a movie based on George R.R. Martin’s Targaryen history Fire and Blood before the first season of Game of Thrones had come out.

'Blindspotting' Evolves From The Big Screen To The Little Screen

In 2018, Blindspotting was one of the buzziest movies to come out of the Sundance Film Festival. Now, it's has been spun off into a series on Starz, offering a fresh and more expansive take on the movie's themes around incarceration and race. Jasmine Cephas Jones plays Ashely. She had a supporting role in the film, but now she is story's central focus. And there's a colorful cast of new characters and musical set-pieces to boot.

TV serves up the scares today with the series premieres of American Horror Stories, a spinoff of Ryan Murphy’s beloved anthology, and Dr. Death, Peacock’s true crime drama about extreme medical malpractice. Also today: Never Have I Ever introduces a new love triangle in Season 2, Colin Farrell fronts a new series on AMC+, and more. Here’s what’s new and noteworthy on TV this Thursday:

It was revealed today that the incredible and inspiring true story of Charles “Charlie” Wiggins, the greatest African American race car driver of the 1920s and 1930s, is being developed into a feature film by Ed Welburn and Madisun Leigh via their Welburn Media Productions banner. The film, titled “Eraced”, has attracted first-of-its-kind brand collaboration during development from blue chip partners including INDYCAR and Firestone. INDYCAR has pledged support for physical production, marketing and promotional opportunities during production, and additional marketing resources, including media, at time of release. Firestone will be a production partner for the film.

Celebrate films and get into the spirit of summer by watching movies outdoors, under the stars. Movies on Main is a partnership between local businesses, individuals and foundations that have one goal in mind: bring people of all ages together through the power of film. Movies are shown outdoors at...

Chance the Rapper to bring secret concert to the big screen

LOS ANGELES (AP) — Chance the Rapper is bringing a secret concert filmed four years ago to the big screen next month. The Grammy winner's upcoming concert film “Magnificent Coloring World” premieres Aug. 13 in select AMC Theatres. The concert was filmed in his hometown of Chicago during his Magnificent Coloring World Tour in 2017, shortly after he won three Grammys through his 2016 independent project “Coloring Book,” which won best rap album. Chance led the film’s editing process and self-distributed it through his House of Kicks umbrella, which reimagines music, film and virtual experiences. His partnership with the theater chain marks the first time a music artist has independently distributed a film through AMC.

Debra Granik is taking on a new genre. The Oscar-nominated filmmaker will make her first foray into the YA world with a feature adaptation of “Like No Other,” Una LaMarche’s 2014 novel about star-crossed lovers. Deadline broke the news. Described as a “contemporary take on ‘West Side Story,'” “Like No...

‘Dr. Death': The True Crime Story Transitions From Podcast to the Small Screen

True crime stories have long been a fascinating subject for podcast listeners. Now one of the most popular true crime podcasts, “Dr. Death,” has made its way to Peacock. The series was adapted by Patrick Macmanus and a team of writers from the Wondery podcast network. “Dr. Death” is inspired...

A new animated movie inspired by the music of Juice WRLD is reportedly in the works. News of the forthcoming project came alongside the announcement of a new production company called Modern Magic. As Deadline report, Modern Magic is a venture between former MGM Co-President of Production Adam Rosenberg and...

Music and movies go together naturally. Films have theme songs that can become popular hits, soundtracks to add drama, and scores that can build up expectations, tensions, and emotions. The best-known movies feature music that reaches beyond the silver screen and stays with us long after the last credits have...

People love stories about serial killers, it’s hard to say why and it’s even harder to comprehend the true nature of it, but folks are drawn to these stories and as a result, so are the actors that take on the roles. There are plenty of serial killer movies that have little if anything to do with a real-life killer, but there are also quite a few that are based on true stories and take on a life of their own. Those stories are perhaps some of the most detestable and disturbing since there’s a possibility that such things really have happened and there is the reality that some of these things did happen in the past, and there were people out there that made them happen. That level of depravity is hard for a lot of people to understand since it tends to take a mind that’s well past the sane mark and a lot of people don’t want to admit that they can entertain such thoughts. But oh, do they enjoy watching the result that comes from such thinking since there are plenty of people that are more than happy to sit down and watch as someone emulates one serial killer or another on screen. In some cases, the actors are so good at what they’re doing that they give people chills. But at the end of the day, it has to be said that a lot of people have a touch of the sickness that it takes to get into this type of material, they just don’t want to own up to it.

Biopics made about historical icons and pop culture celebrities make sense as these people usually have very interesting lives, and are perfect for melodrama even if it’s usually partially fictionalized. But then every once in a while we see a report or trailer on a new movie coming out based...

Is A Classic Horror Story a True Story?

‘A Classic Horror Story’ is an Italian horror movie that feeds on the genre’s most popular tropes and presents something entirely different. Following a group of stranded carpoolers who start getting murdered by gruesome masked killers, the film tells a gory story that is all too familiar. However, it strays away from any supernatural incidents and instead explores ancient cults and the Italian mafia. The end proposes an explanation so deeply reminiscent of reality that it essentially breaks the fourth wall and attempts to bring the story into the real world. Could the events of ‘A Classic Horror Story’ be based on real-life? Let’s find out.

When it was revealed in 2018 that the GI Joe movie franchise would be rebooted with an origin story for Snake Eyes--a character that never shows his face and never speaks, with a mysterious past--it certainly didn't seem like a good idea. After all, traditionally movies that give backstories to characters that don't need them have a spotty track record (Hey, Rob Zombie's Halloween remake). With Crazy Rich Asians and A Simple Favor star Henry Golding cast in the title role and a slew of seeds planted for a new GI Joe film universe, though, Snake Eyes is better than you'd expect.

Michelle Monaghan has been cast to play identical twins in Netflix’s upcoming limited series “Echoes,” a psychological thriller from executive producers and co-showrunners Brian Yorkey (“13 Reasons Why”) and Quinton Peeples (“Runaways”). Per the logline, “Echoes” is a mystery thriller about two identical twins, Leni and Gina, who share a...