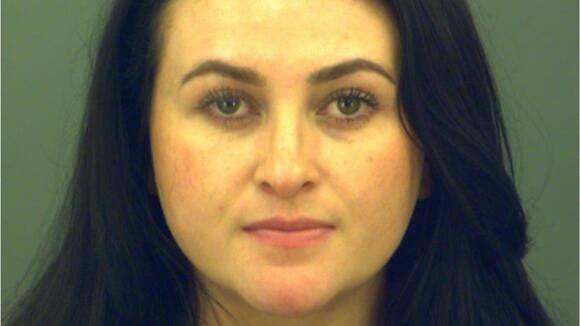 SAN ELIZARIO, Texas — A woman was arrested for trespassing on school grounds after posing as her daughter for nearly an entire school day, investigators said.

The videos is titled “Going to school as my 13yr old daughter (middle school edition).” In it, Garcia wears a yellow hooded sweatshirt, “skinny jeans” and a black face mask. She is seen taking selfies in a school bathroom mirror. She also eats lunch in the school cafeteria without wearing a mask. She said that someone commented that she looked 35, but otherwise she made it to the next class. She was caught at the end of the school day and sent to the principal’s office.

She posted a 12-minute video Thursday detailing why she went to school as her daughter. She called her actions a social experiment to test the school’s security and to show how inattentive staff is to students.

She said she made it to seventh period before a teacher noticed. She said most of the staff was more concerned about her walking around with her phone out.

“I did this to prove a point, I’m a parent, I proved that I could get through the public school system and I made it without any problem. We need better security at our schools,” she said.

Investigators met with school administrators. Later, they went to Garcia’s house to serve two warrants, one for criminal trespass and the other for tampering with government records. She took video of the encounter and shared it on social media.

She was jailed on those charges as well as an unrelated traffic warrant. She was released on $7,908 bond.

LOS ANGELES — (AP) — An 87-year-old woman found dead inside a freezer in the garage of her Southern California home was a retired homicide detective with the Los Angeles County Sheriff's Department, authorities said Tuesday. Miriam E. Travis retired as a detective sergeant in 1990 after 27 years with...
LOS ANGELES COUNTY, CA・7 HOURS AGO

COBB COUNTY, Ga. — A five-hour standoff at a Cobb County home ended in a murder-suicide with the suspect killing himself. Police confirmed the deaths at the scene to Channel 2′s Darryn Moore. [DOWNLOAD: Free WSB-TV News app for alerts as news breaks]. Cobb County police and SWAT teams were...
COBB COUNTY, GA・2 HOURS AGO
WSB Radio

BERLIN — (AP) — A section of highway in southern Germany was closed Tuesday because of an incident involving an apparently armed passenger on a bus. Police later said they arrested the suspect. Apart from the passenger, only the two drivers were still on board the vehicle Tuesday evening, the...
PUBLIC SAFETY・15 HOURS AGO
WSB Radio

DUNWOODY, Ga. — Channel 2 Action News has learned that the DeKalb County Fire Department has finished its on-site investigation into what caused a Dunwoody apartment building to explode. Now, lawyers for people planning to sue the complex said they will do their own investigation as residents get ready to...
DUNWOODY, GA・12 HOURS AGO

Two children were rushed to the hospital after a fire broke out early Wednesday morning. The Union City fire battalion chief said that firefighters were called to the Hidden Lakes Apartments off Buffington Road around 4:10 a.m. When they arrived, the fire had already been put out with the fire extinguisher. The fire was contained to a single room at the apartment unit.
UNION CITY, GA・1 HOUR AGO
WSB Radio

Suspect who got away from Buckhead shootout has history of violent offenses, records show

ATLANTA — Channel 2 Action News has learned that a suspect who got away following a shootout in a busy Buckhead shopping center had been charged with a violent crime in the past. The latest shooting happened Sept. 10 in the Peachtree Battle shopping center along Peachtree Road in Buckhead,...
ATLANTA, GA・12 HOURS AGO
WSB Radio

DEKLAB COUNTY, Ga. — Part of Interstate 285 southbound in DeKalb County is back open following a serious crash that shutdown the interstate for most of the evening rush. A tractor-trailer wrecked near Exit 40 at E. Ponce de Leon Avenue around 3:45 p.m. Tuesday. Video tweeted by Triple Team...
DEKALB COUNTY, GA・14 HOURS AGO