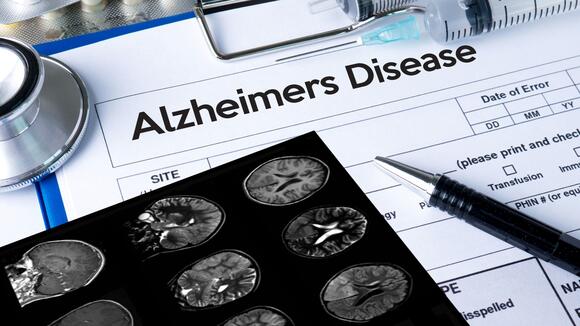 June is Alzheimer’s and Brain Awareness Month, according to the Alzheimer’s Association. The organization asks that people wear purple during the month to help shine a spotlight on the disease.

The Mayo Clinic says “Alzheimer’s disease is a progressive neurologic disorder that causes the brain to shrink (atrophy) and brain cells to die.”

As the disease progresses, patients become unable to care for themselves, according to the Mayo Clinic.

The Mayo Clinic says a combination of genetic, lifestyle and environmental factors can cause the condition to develop.

There are several stages of Alzheimer’s disease: preclinical, mild (or early-stage), moderate and severe (or late-stage), according to the National Institute on Aging.

As disease advances, patients will have increased memory loss and cognitive issues.

Symptoms for late-onset Alzheimers will start appearing in a person’s mid-60s. Early-onset Alzheimer’s starts between a person’s 30s and mid-60s. Normally the first sign is when a person has cognitive issues like finding the correct word, vision/spatial issues and impaired reasoning and judgment, according to the National Institute on Aging.

>>Related: How does Alzheimer’s disease kill you?

But the Alzheimer’s Association said the symptoms should not be confused with normal age-related changes.

Sometimes people will forget names or appointments but will remember them later. Or they may not be able to understand all the latest technology.

Right now, there is no cure for the disease but there are medications available to treat symptoms.

If you are concerned about symptoms, the Alzheimer’s Association has come up with a checklist of questions you can ask your doctor.

The organization also has developed a 10-step questionnaire on what to do when you notice a loved one having memory trouble.

If You Notice This When Cooking, It May Be an Early Dementia Sign, Doctors Say

While it's not uncommon to become more forgetful as you get older, there is a fine line between a normal sign of aging and what may be an indicator of more serious cognitive decline. Dementia currently affects at least five million adults in the U.S., per the Centers for Disease Control and Prevention (CDC), but it can be hard to diagnose as symptoms are subtle and it includes a range of diseases, which also means symptoms may vary widely from person to person. There are, however, a few general signs that crop up early on that indicate your brain lapses are cause for concern, especially when it comes to changes in everyday tasks, like cooking. Read on to find out what you should be looking out for when you make your next meal.

BOSTON - New research in humans and mice identifies a particular signaling molecule that can help modify inflammation and the immune system to protect against Alzheimer's disease. The work, which was led by investigators at Massachusetts General Hospital (MGH), is published in Nature. Cognitive decline associated with Alzheimer's disease develops...

Newswise — PHILADELPHIA—Alzheimer’s disease and related diseases can still only be confirmed in deceased patients’ brains via autopsy. Even so, the development of biomarkers can give patients and their families answers during life: Alzheimer’s disease can be accurately detected via peptides and proteins in a patient’s cerebrospinal fluids (CSF), which can be collected through a lumbar puncture and tested while the patient is alive. In 2018, a new framework suggested combining three Alzheimer’s disease biomarkers in CSF – pathologic amyloid plaques (A), tangles (T), and neurodegeneration (N), collectively called ATN. According to recent research from the Perelman School of Medicine at the University of Pennsylvania, the ATN framework can be extended to detect another neurodegenerative condition: frontotemporal degeneration.

Experts say that a molecule released by special brain cells may open up entirely new treatment options in researchers’ ongoing fight against Alzheimer's disease. Afflicting over six million people in the United States alone, Alzheimer’s disease has earned a troubling reputation as being one of the most common and dangerous forms of dementia known to the medical world. While most associate the disease with memory loss and other cognitive impairments, the science behind Alzheimer’s can help explain just how devastating the condition can be.

(RTTNews) - Eli Lilly and Co. (LLY) and Banner Alzheimer's Institute have reached a strategic research collaboration to evaluate whether treatment with donanemab can slow the clinical progression of Alzheimer's disease in trial participants, Lilly said in a statement. The collaboration is a part of the planned phase 3, randomized,...

Scientists Search for Clues to How Alzheimer’s Disease Unfolds

For decades, scientists have poured billions of dollars into research designed to better understand and treat Alzheimer’s disease, the irreversible, progressive brain disorder that robs people of their ability to communicate and retain memories. Despite these investments, no cure exists, and medications designed to treat the condition have had a 99% fail rate in clinical trials over time, one of the highest of any disease area.

New research in humans identifies a particular signaling molecule that can help modify inflammation and the immune system to protect against Alzheimer’s disease. The work, which was led by investigators at Massachusetts General Hospital (MGH), is published in Nature. Cognitive decline associated with Alzheimer’s disease develops when neurons begin to...

Alzheimer’s disease hits close to home for many, especially for grandchildren, which is why Dr. Laurie Zelinger, a Cedarhurst board certified child psychologist, decided to write “Please Explain ‘Alzheimer’s Disease’ to Me,” a book explaining Alzheimer’s disease, a common form of dementia, to children. Written for 6- to 9-year-olds, Zelinger’s...

This content is sponsored by Watermark Communities. Alzheimer’s disease has been in the news lately. This past June, during Alzheimer’s Awareness month, the FDA approved the drug Aduhelm as a possible treatment for all patients. However, the FDA later narrowed the use, specifying it was to be prescribed to patients with early-stage Alzheimer’s. While the long-term efficacy and impact of Aduhelm are not yet known, the drug’s approval sparked hope among the many Americans affected by the disease with no known cure.

In a recent study published in Clinical Immunology, researchers found why people with obstructive sleep apnea may have associated autoimmune disorders. The results could lead to better approaches to treatment and possibly new drug therapies. The study is at the University of Georgia. One author is Bradley Phillips. The study...

An influential, independent panel unanimously voted that aducanumab (Aduhelm) offers no benefit for patients with Alzheimer's disease (AD), adding to growing opposition from medical experts to the US Food and Drug Administration's (FDA's) approval of this controversial drug. The Institute for Clinical and Economic Review (ICER) asked one of its...

As part of their weekly meeting, the Lima Rotary Club got an idea of some of the warning signs that people should be on the lookout for as friends and loved ones start to get a little older. The speaker was from the Alzheimer’s Association, and she says the biggest...

Vitamin K2 has potential to prevent and slow Alzheimer’s Disease

Science publication Nutrients recently published a review analysing the mounting evidence that connects vitamin K2 to factors involved in Alzheimer’s disease. It concluded that Vitamin K2 has the potential to slow the progression of Alzheimer’s and contribute to its prevention. In the review, “Vitamin K2 Holds Promise for Alzheimer’s Prevention...

Signs of Alzheimer's: 7 Signs Your Forgetfulness Is Really an Early Symptom of Alzheimer’s Disease

We’ve all forgotten a name or misplaced our keys. Fatigue and stress can make even the most put-together person seem out of sorts. But how do we know if it’s a momentary lapse or something more serious?. People fear Alzheimer’s disease more than any other condition – cancer included. Losing...

ST. LOUIS — Regular sleep disruptions take a toll on the body’s circadian rhythm, a key part of our biological clock that regulates the sleep-wake cycle in individuals. A study by researchers at Washington University shows that a protein produced by circadian rhythm genes is linked to Alzheimer’s disease. Scientists believe that the debilitating disease could thus be treated with a drug that targets the body clock.

Socorro Rocha , 84, had been working for years at her job when she noticed her paycheck was coming out lower even though her hours hadn’t changed. She brought up the discrepancies with her daughter, Judith. Human resources revealed that Socorro might not have been punching in and out on schedule.