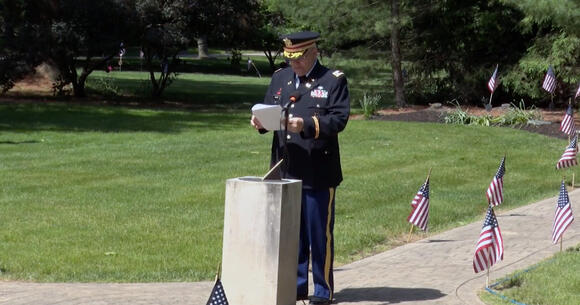 (HUDSON, Ohio) Hudson's branch of the American Legion will permanently close following an investigation into members who allegedly silenced an Army veteran's microphone during a Memorial Day speech about Black people's role in the creation of the holiday.

Per CNN, the American Legion Department of Ohio accused Post 464 — the Hudson chapter — of turning off retired Lt. Col. Bernard Kemter's microphone just as he started to recount a tale of liberated Black slaves paying homage to military veterans. The nonprofit association, which works to protect the rights of U.S. veterans, announced an internal investigation into the incident on Thursday.

Kemter's volume can be heard steadily decreasing around the 1:30 mark in the video below:

One of those event organizers was Jim Garrison, the Hudson Legion's post officer, who resigned on Friday for his involvement, according to News 5 Cleveland.

“The American Legion Department of Ohio does not hold space for members, veterans, or families of veterans who believe that censoring black history is acceptable behavior,” reads another press release that debuted Friday. “We discovered that the censoring that occurred at the Memorial Day Ceremony in Hudson, Ohio, sponsored by Hudson American Legion Post 464, was pre-meditated and planned by Jim Garrison and Cindy Suchan."

Suchan, who organized the Hudson Memorial Day Parade, was the public official to receive the speech ahead of the event and suggest Kemter cut the part about freed slaves giving Union soldiers at a Confederate prisoner of war camp an honorable burial. Suchan has yet to resign.

"I want to know why the organizers felt they had to censor this veteran at our Hudson Memorial Day event," reads a tweet from State Rep. Casey Weinstein, who oversees Hudson and the surrounding area.

A Reddit post dated June 4 shows pictures of a man who is allegedly Suchan's son, wearing a t-shirt that reads "Support your local white boys."

"So you," a Facebook account belonging to Cindy Marsh Suchan commented on the photo, along with a beaming Emoji.

The most recent legion press release states Garrison's and Suchan's actions violate the Legion's policy on censorship, and goes on to state the following:

We are deeply saddened by this and stand in unity and solidarity with the black community and all peoples of race, color, religion, sex, and gender, so that those who are exclusive of such persons will know that this behavior is not acceptable in The American Legion, in our homes, our hearts, our communities, in private, public, or anywhere.

(CNN) — The parents of the suspect in a shooting at Oxford High School in Michigan that left four students dead this week are facing involuntary manslaughter charges in those deaths. Legal experts were quick to point out that such charges are far from the norm -- it is James...
MICHIGAN STATE・6 HOURS AGO
The Hill

President Biden signed a short-term funding bill on Friday, averting a government shutdown hours before the deadline. A group of conservatives in the House and Senate had threatened the fate of the legislation over opposition to Biden’s coronavirus vaccine mandate before finally allowing the legislation to pass. The bill funds...
CONGRESS & COURTS・9 HOURS AGO
ABC News

The plan does not include more aggressive measures like requiring testing for domestic flights or mandating testing for passengers after their arrival in the U.S.
BETHESDA, MD・1 DAY AGO
ABC News

A blizzard warning has been issued for Hawaii, with at least 12 inches of snow forecast this weekend.
HAWAII STATE・2 HOURS AGO

An appeals court peppered DOJ attorneys Friday with questions over whether it's appropriate for the DOJ to defend Donald Trump against E. Jean Carroll's defamation suit.
POTUS・8 HOURS AGO
The Associated Press

Kremlin: Putin to seek guarantees over Ukraine from Biden

MOSCOW (AP) — The Kremlin said Friday that President Vladimir Putin will seek binding guarantees precluding NATO’s expansion to Ukraine during a planned call with U.S. President Joe Biden, while the Ukrainian defense minister warned that Russia could invade his country next month. With tensions between Russia and the West...
POLITICS・11 HOURS AGO
CBS News

The man accused of opening fire at a King Soopers grocery store in Colorado last March and killing 10 people has been deemed mentally incompetent to stand trial for the time being, the Boulder County district attorney's office told CBS News on Friday. Ahmad Al Aliwi Alissa is facing 10 counts of first-degree murder and more than 20 counts of attempted murder, among other charges.
COLORADO STATE・5 HOURS AGO
The Associated Press

THE HAGUE, Netherlands (AP) — South African scientists are warning that reinfections among people who’ve already battled COVID-19 appear to be more likely with the new omicron variant than with earlier coronavirus mutants. A research group has been tracking reinfections in South Africa and reported a jump with the arrival...
PUBLIC HEALTH・14 HOURS AGO

The November jobs report gave a muddled picture of an improving economy. Overall job growth fell far short of expectations, with the U.S. adding just 210,000 of the roughly 500,000 jobs that analysts projected the economy to gain last month. Even so, the unemployment rate sunk from 4.6 percent to 4.2 percent, landing less than 1 percentage point above the pre-pandemic jobless rate.
BUSINESS・7 HOURS AGO
CBS News

The Portland Trail Blazers fired general manager and president of basketball operations Neil Olshey after finishing an investigation into "concerns and complaints around our workplace environment at the practice facility," the team said Friday. In a statement, the Blazers said Olshey violated the teams' code of conduct. "Out of respect...
NBA・8 HOURS AGO